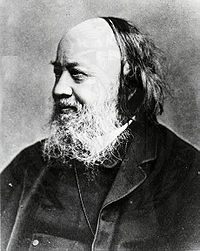 Sir Edwin Chadwick KCB 1800 –1890 was an English social reformer, noted for his work to reform the Poor Laws and improve sanitary conditions and public health. Edwin Chadiwck was also the sub editor of The Examiner.

Edwin Chadwick was a friend of John Stuart Mill, and Florence Nightingale, who wrote to him from Malvern extolling the ‘genius’ of James Manby Gully, and he then took the Water Cure at Malvern under James Manby Gully himself.

On 17th July 1869, *James John Garth Wilkinson attended a garden tea party at the home of Edwin Chadwick (Anon, Journal of the Society of Arts, Volume 17, Society of Arts (Great Britain)* 27.11.1868-12.11.1969, (The Society, 1869). Page 720. See also D. Gladstone, [Edwin Chadwick: Nineteenth-Century Social Reform, Volume 1,*](http://books.google.co.uk/books?id=vT2faKJZJxIC&pg=PA86&lpg=PA86&dq=edwin+chadwick+garth+wilkinson&source=bl&ots=pwFIDOkAw6&sig=MUAoZtaAnQdA6EzGoIlSNPSKW80&hl=en&sa=X&ei=vrBJUMTTDsG60QWwiYHYAg&ved=0CC0Q6AEwAA#v=onepage&q=edwin%20chadwick%20garth%20wilkinson&f=false) (Routledge, 5 Nov 1997). Page 86) for the purposes of demonstrating a new air filtration system invented by Douglas Strutt Galton (1822-1899) in a new model cottage, on behalf of the Council for the Society of Arts, to the Ladies Sanitary Association.

Edwin Chadwick wrote for the _Westminster Review _in the days before John Chapman’s proprietorship.

From http://en.wikipedia.org/wiki/Edwin_Chadwick In 1832 Chadwick was employed by the Royal Commission appointed to inquire into the operation of the Poor Laws, and in 1833 he was made a full member of that body.

Chadwick and Nassau William Senior drafted the famous report of 1834 recommending the reform of the old Poor Law. Under the 1834 system individual parishes were formed into Poor Law Unions – each Poor Law Union was to have a union workhouse.

Chadwick favoured a more centralised system of administration than that which was adopted, and he felt the Poor Law reform of 1834 should have provided for the management of poor law relief by salaried officers controlled from a central board, the boards of guardians acting merely as inspectors.

In 1834 he was appointed secretary to the Poor Law commissioners. Unwilling to administer an act of which he was largely the author in any way other than the way he thought best, he found it hard to get along with his superiors.

This disagreement, among others, contributed to the dissolution of the Poor Law Commission in 1847. Chadwick’s chief contribution to political controversy was his belief in entrusting certain departments of local affairs to trained and selected experts, instead of to representatives elected on the principle of local self government.

While still officially working with the Poor Law, Chadwick took up the question of sanitation in conjunction with Thomas Southwood Smith. Their joint efforts produced a salutary improvement in the public health. His report on The Sanitary Condition of the Labouring Population (1842) was researched and published at his own expense.

Chadwick was a commissioner of the Metropolitan Commission of Sewers in London from 1848 to 1849; he was also a commissioner of the General Board of Health from its establishment in 1848 to its abolition in 1854, when he retired on a pension, and occupied the remainder of his life in voluntary contributions to sanitary, health and economical questions. In January 1884 he was appointed as the first president of the Association of Public Sanitary Inspectors (now the Chartered Institute of Environmental Health).

In recognition of his public service Chadwick was knighted in 1889. He served in his post until his death in East Sheen in Surrey.

*Was Edwin Chadwick a colleague of James John Wilkinson senior (father of James John Garth Wilkinson) in 1847? Edwin Chadwick certainly used the firm of Wilkinson and Co. as his solicitors in 1857 (William Martin Wilkinson, brother of James John Garth Wilkinson, was a solicitor) (and Chadwick also used Wilkinson and Co as his tailors in 1857!) Also, a George Wilkinson was the Architect to the Poor Law Commission in Ireland in 1841 and 1843, when he worked alongside Edwin Chadwick concerning the construction of workhouses in Ireland, see entries 5th August 1843 by George Wilkinson (inclusion of plans for 7 workhouses to accommodate 2000 people, ’… made with reference to a class of idiot paupers or lunatics not dangerous…’) and 8th August 1843 by Edwin Chadwick (note the inclusion of ’… idiot wards on each side of the infirmary building…’ ) (Janet Percival, The papers of Sir Edwin Chadwick (1800-1890): a handlist [of the collection in the library of University College, London],__ __University College, London. Library, (The Library, 1983). Page 140. See also Anon, Journals of the House of Lords, Volume 75, Great Britain. Parliament. House of Lords, (H.M. Stationery Office, 1843). Page 236. See also Anon, The Royal kalendar, and court and city register for England, Scotland, Ireland, and the colonies, (Vol. for 1832 includes the British almanac of the Society for the Diffusion of Useful Knowledge), (1841). Page 248).