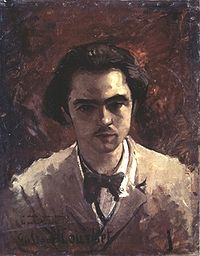 Paul Marie Verlaine 1844 – 1896 was a French poet associated with the Symbolist movement. He is considered one of the greatest representatives of the fin de siècle in international and French poetry.

Paul Verlaine was an advocate of homeopathy and a friend of Theophile Gautier, Stephane Mallarme, and Arthur William Symons,

Born in Metz, Paul Verlaine was educated at the lycée Bonaparte (now the lycée Condorcet), in Paris and then took up a post in the civil service. He began writing poetry at an early age, and was initially influenced by the Parnassien movement and its leader, Charles Leconte de Lisle.

Verlaine’s first published collection, Poèmes saturniens (1866), though adversely commented upon by Sainte Beuve, established him as a poet of promise and originality.

Verlaine’s private life spills over into his work, beginning with his love for Mathilde Mauté. Mauté became Verlaine’s wife in 1870.

At the proclamation of the Third Republic in the same year, Verlaine joined the 160th battalion of the Garde nationale, turning Communard on 18 March 1871.

He became head of the press bureau of the Central Committee of the Paris Commune. Verlaine escaped the deadly street fighting known as the Bloody Week, or Semaine Sanglante, and went into hiding in the Pas de Calais.

Verlaine returned to Paris in August 1871, and, in September, he received the first letter from the poet Arthur Rimbaud. By 1872, he had lost interest in Mathilde, and effectively abandoned her and their son, preferring the company of his new lover. Arthur Rimbaud and Verlaine’s stormy love affair took them to London in 1872.

In July 1873 in a drunken, jealous rage, he fired two shots with a pistol at Arthur Rimbaud, wounding his left wrist, though not seriously injuring the poet. As an indirect result of this incident, Verlaine was arrested and imprisoned at Mons, where he underwent a conversion to Roman Catholicism, which again influenced his work and provoked Arthur Rimbaud’s sharp criticism.

The poems collected in Romances sans paroles (1874) were written between 1872 and 1873, inspired by Verlaine’s nostalgically colored recollections of his life with Mathilde on the one hand and impressionistic sketches of his on again off again year long escapade with Arthur Rimbaud on the other. __

Romances sans paroles was published while Verlaine was imprisoned. Following his release from prison, Verlaine again traveled to England, where he worked for some years as a teacher and produced another successful collection, Sagesse.

He returned to France in 1877 and, while teaching English at a school in Rethel, became infatuated with one of his pupils, Lucien Létinois, who inspired Verlaine to write further poems. Verlaine was devastated when the boy died of typhus in 1883.

Verlaine’s last years saw his descent into drug addiction, alcoholism, and poverty. He lived in slums and public hospitals, and spent his days drinking absinthe in Paris cafes. Fortunately, the French people’s love of the arts was able to resurrect support and bring in an income for Verlaine: his early poetry was rediscovered, his lifestyle and strange behavior in front of crowds attracted admiration, and in 1894 he was elected France’s “Prince of Poets” by his peers.

His poetry was admired and recognized as ground breaking, serving as a source of inspiration to composers such as Gabriel Fauré, who set many of his poems to music, including La bonne chanson, and Claude Debussy, who set five of the Fêtes galantes poems to music, forming part of the mélodie collection known as the Recueil Vasnier.

Paul Verlaine died in Paris at the age of 51 on 8 January 1896., and was buried in the Cimetière des Batignolles.