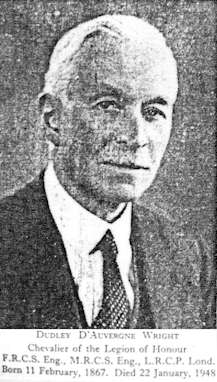 Dudley Wright was awarded the Chevallier of the Legion of Honour for his work at the Hopital de L’Alliance in France in 1914.

Dudley Wright was interested in infra red phtographs of the human body, and he was a keen dowser.

Dudley d’Auvergne Wright was born in Colombo in Ceylon on 11.2.1867, where his father William Dumaresq Wright was working in the Ceylon Civil Service. Wright was educated at Haileybury College and at University College Hospital, and at the university of Vienna.

In 1890, he became Assistant Surgeon and ENT Surgeon at the London Homeopathic Hospital, and he established his consulting practice at Queen Anne Street and later at Bentinck Street. where he became widekly known for his method of injecting haemorrhoids, a method he introduced into the UK, publishing a brochure on this subject, _The treatment of hæmorrhoids and rectal prolapse by means of interstitial injections_ in 1905 - a technique still used today (http://en.wikipedia.org/wiki/Sclerotherapy. See also J Pediatr Surg. 1998 Feb;33(2):255-8. Injection sclerotherapy in the treatment of rectal prolapse in infants and children. Chan WK, Kay SM, Laberge JM, Gallucci JG, Bensoussan AL, Yazbeck S. Source Department of Pediatric Surgery, The Montreal Children’s Hospital, McGill University, Quebec, Canada).

TWELFTH ANNUAL MEETING OF THE AMERICAN HOMOEOPATHIC, OPHTHALMOLOGICAL, OTOLOGICAL AND LARYNGOLOGICAL SOCIETY, HELD IN ATLANTIC CITY, N. J., JUNE 19TH AND 20TH, 1899. Soon after assuming office the corresponding members selected at the last meeting, Charles Thomas Knox Shaw and Dudley d’Auvergne Wright of London, England, and Daniel Parenteau of Paris, France, were each notified of  their election. Daniel Parenteau did not reply to his letter of notification or to one sent by the President later.

My Dear Doctor: I should have acknowledged before this your kind note of February i8th last, acquainting me that the Ophthalmological, Otological, and Laryngological Society of America had done  me the great honor of electing me a corresponding member, only I have been waiting until I had written a paper which might be presented to the congress.

Having now accomplished this, I am sending it to you under separate cover, and would beg you to be so good as to convey to the society my sincere thanks for the honor which has been thus conferred upon me.

It is much to my regret that I am unable to join you all in your meeting, and to have the pleasure of becoming personally acquainted with yourself and your colleagues, but it unfortunately happens that our British Homeopathic Congress falls in the same week as your own, and as I am one of those who has promised to speak on one of the papers, I must be present at the meeting.

With my kind regards and sincere good wishes, believe me yours very truly, Dudley Wright.

In September 1914, at a meeting at the Theosophical Society, Dudley Wright listened to Hector Hugh Munro ‘Saki’ describe the horrors of the French battlefields. The next morning, Dudley Wright reported to the War Office and the British Red cross and took a surgical Unit to the French Front. On 15.9.1914, Dudley Wright was in France.

Lady Fisher Smith, Lady Perks ( the wife of Robert William Perks) and Mrs Sidney H Holman had a week to collect money and surgical equipment, stored at his rooms in Bentinck Street, and accompanied by his nurse receptionist Barbara McGlashan and an American friend Madame Bartlett, he arrived at Victoria Station at 7am on 15.9.1914. Mrs Sidney H Holman, her daughter Joyce and her future husband Hastings Bertrand Lees Smith were there to wish them luck. Consuelo Duchess of Marlborough threw a bag of gold coins at Dudley Wright as his train departed.

The Hopital de L’Alliance was eventually taken over by the French, so means were put in place to relocate the hospital and its expertise back to London. The Manor House Hospital at Hampstead Heath was born. By 24.7.1917, the War Office had established a hospital to treat disabled soldiers and sailors returning from WW1 under the British Red Cross and the Order of St. John of Jerusalem, and by 29.9.1917, the Manor House Hospital was opened.

Dudley Wright was assisted in his work at the Manor House Hospital by John Moorhead Byres Moir, and he finally left the Manor House Hospital in 1919, and worked in private practice with Andrew Tocher Cunningham, continuing his practice in London until 1920, when ill health forced him to retire. He ceased all work and took up farming in Devonshire, and he also grew flowers for the Paris market at his villa retreat in the Riviera.

In 1930, his health restored, Dudley Wright resumed his surgical practice in Bournemouth and in London. When WWII broke out, he went to Canada, and after a year, he headed towards South Africa, though his ship was sunk enroute by the germans, and Dudley Wright and his wife spent over an hour in the water in their life jackets before being rescued by another German vessel, they became POWs in Germany, Dudley interned in Hanover, and his wife interned near the Swiss border.

After a year, they were allowed to live on parole in Berlin, and interrogated by the Berlin Police. Amazingly, they were freed and allowed to travel on to Cape Town. Dudley Wright believed this was due to the fact that the Hopital de L’Alliance had treated German wounded, and also provided them with a piano!

Finally arriving in Cape Town, Dudley Wright began his surgical practice, but in 1946, he was back in Britian, to settle in Bembridge, Isle of Wight, where he wrote _Foods for good health and healing_.

Dudley Wright died at Bembridge on the Isle of Wight in

Dudley Wright was a member of the Entomological Society, Röntgen Society, and the Anthropological Institute,

Dudley Wright wrote Foods for good health and healing, The treatment of hæmorrhoids and rectal prolapse by means of interstitial injections, Druidism: the ancient faith of Britain, The Epworth Phenomena (full copy), The Book of Vampires, The Eleusian Mysteries (full copy), Robert Burns and His Masonic Circle, A Manual of Buddhism, and he contributed articles and cases to various homeopathic publications.

NB: There are an astonishingly large number of books written by ‘Dudley Wright’ on Google Books, but I cannot determine if these are by Dudley d’Auvergne Wright. They cover a whole spectrum of Freemasonry, religion and psychic phenomenon.