J A Schubert 1800? - 1868? was an Austrian orthodox physician who converted to homeopathy to become a student of Samuel Hahnemann in Leipsig.

Schubert was the homeopath of Anton Philipp Reclam and his daughter,

Schubert experimented with innoculation in 1853, producing an itch after innoculating prurulent matter, and he treated Cholera homeopathically in 1830. 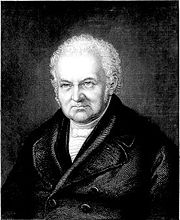 Gotthilf Henrich von Schubert wrote The History of the Soul, and he investigated the Seeress of Provost with Justinus Kerner:

Frederica Hauffe, better known as the “Seeress of Provost,” was a somnambule who came under the observation of Justinus Kerner, a well known poet and physician, early in the nineteenth century.

A natural trance and convulsive patient, she came to Justinus Kerner to be magnetised, but he endeavoured at first to treat her by medicinal means. Finding these unavailing, however, he resorted to magnet­ism. Henceforward the Seeress passed the greater part of her life in trance, displaying all the usual somnambulic phenomena.

She saw and conversed with apparitions, developed remark­able clairvoyant faculties, and dealt also in mysticism, des­cribing intricate symbolical circle systems. She was also the author of a “primitive” language, constructed with some ingenuity, which purported to be that tongue, spoken by the patriarchs of old, wherein the words conveyed in some mystic manner the properties of the things they designated.

Justinus Kerner and others were sometimes able to see Frau Hauffe’s ghostly interlocutors, as dim grey pillars of cloud. Physical phenomena of a poltergeistic character were also of common occurrence in her presence.

Justinus Kerner dedicated his book on The Seeress of Provost to Gotthilf Henrich von Schubert.