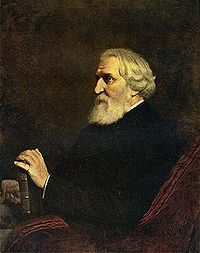 Ivan Sergeyevich Turgenev 1818 – 1883 was a Russian novelist and playwright.

Turgenev was a friend of Fyodor Dostoevsky and Leo Tolstoy. Turgenev wrote about homeopathy in his novel Father’s and Sons, and in Phantoms and Other Stories.

Turgenev was born into a wealthy landed family in Oryol, Russia, on October 28, 1818. His father, Sergei Nikolaevich Turgenev, a colonel in the Imperial Russian cavalry, was a chronic philanderer. Ivan’s mother Varvara Petrovna Lutovinova was a wealthy heiress, who had had an unhappy childhood and suffered in her marriage.

Ivan’s father died when Ivan was sixteen, leaving him and his brother Nicholas to be brought up by their abusive mother.

Turgenev was impressed with German society and returned home believing that Russia could best improve itself by incorporating ideas from the Age of Enlightenment. Like many of his educated contemporaries, he was particularly opposed to serfdom.

When Turgenev was a child a family serf had read to him verses from the Rossiad of Mikhail Kheraskov, a celebrated poet of the 18th century. Turgenev’s early attempts in literature, poems, and sketches gave indications of genius and were favorably spoken of by Vissarion Belinsky, then the leading Russian literary critic.

During the latter part of his life, Turgenev did not reside much in Russia; he lived either at Baden Baden or Paris, often in proximity to the family of the celebrated singer Pauline Viardot García, with whom he had a lifelong affair.

Turgenev never married, although he had a daughter with one of his family’s serfs. He was tall and broad shouldered, but was timid, restrained and soft spoken. His closest literary friend was Gustave Flaubert. His relations with Leo Tolstoy and Fyodor Dostoevsky were often strained, as the two were, for various reasons, dismayed by Turgenev’s seeming preference for Western Europe.

His rocky friendship with Leo Tolstoy in 1861 wrought such animosity that Leo Tolstoy challenged Turgenev to a duel, afterwards apologizing. The two did not speak for 17 years.

Fyodor Dostoevsky parodies Turgenev in his novel The Devils (1872) through the character of the vain novelist Karmazinov, who is anxious to ingratiate himself with the radical youth. However, in 1880 Fyodor Dostoevsky’s speech at the unveiling of the Pushkin monument brought about a reconciliation of sorts with Turgenev, who, like many in the audience, was moved to tears by his rival’s eloquent tribute to the Russian spirit.

Turgenev occasionally visited England, and in 1879 the honorary degree of Doctor of Civil Law was conferred upon him by the University of Oxford.

Turgenev died at Bougival, near Paris, on September 4, 1883. On his death bed he pleaded with Leo Tolstoy: “My friend, return to literature!” After this Leo Tolstoy wrote such works as The Death of Ivan Ilyich and The Kreutzer Sonata.

Turgenev first made his name with A Sportsman’s Sketches (??????? ????????), also known as Sketches from a Hunter’s Album or Notes of a Hunter, a collection of short stories based on his observations of peasant life and nature while hunting in the forests around his mother’s estate of Spasskoye.

Most of the stories were published in a single volume in 1852, with others being added in later editions. The book is credited with having influenced public opinion in favour of the abolition of serfdom in

One of the stories in A Sportsman’s Sketches, known as “Bezhin Lea” or “Byezhin Prairie”, was later to become the basis for the controversial film Bezhin Meadow (1937), directed by Sergei Eisenstein.

In the 1840s and early 1850s during the rule of Tsar Nicholas I, the political climate in Russia was stifling for many writers. This is evident in the despair and subsequent death of Gogol, and the oppression, persecution and arrests of artists, scientists and writers, including Fyodor Dostoevsky.

During this time, thousands of Russian intellectuals (members of the intelligentsia) emigrated to Europe. Among them were Alexander Herzen and Turgenev himself, although the latter’s decision to settle abroad probably had more to do with his fateful love for Pauline Viardot García than anything else.

In 1852, when his first major novels of Russian society were still to come, Turgenev wrote an obituary for Nikolai Gogol intended for publication in the Saint Petersburg Gazette. The key passage reads, ”Gogol is dead!… What Russian heart is not shaken by those three words?… He is gone, that man whom we now have the right, the bitter right given to us by death, to call great.” The censor of Saint Petersburg did not approve of this and banned publication, but the Moscow censor allowed it to be published in a newspaper in that city. The censor was dismissed, but Turgenev was held responsible for the incident, imprisoned for a month, and then exiled to his country estate for nearly two years.

In 1854 he moved to Western Europe and during the following year produced the novel Rudin (”?????”), the story of a man in his thirties who is unable to put his talents and idealism to any use in the Russia of Nicholas I. Rudin is also full of nostalgia for the idealistic student circles of the 1840s.

In 1858 Turgenev wrote the novel A Nest of the Gentry (”?????????? ??????”, published 1859), also full of nostalgia for the irretrievable past and of love for the Russian countryside. It contains one of his most memorable female characters, Liza, whom Dostoyevsky paid tribute to in his Pushkin speech of 1880, alongside Tatiana and Leo Tolstoy’s Natasha Rostova.

Tsar Alexander II had ascended the Russian throne in 1855, and the political climate had become more relaxed. In 1859, inspired by reports of positive social changes, Turgenev wrote the novel On the Eve (”????????”), portraying the Bulgarian revolutionary Insarov.

The following year saw the publication of one of his finest novellas, First Love (”?????? ??????”), which was based on bitter sweet childhood memories, and the delivery of his speech ”Hamlet and Don Quixote” at a public reading in Saint Petersburg in aid of writers and scholars suffering hardship.

The vision presented therein of man torn between the self centred scepticism of Hamlet and the idealistic generosity of Don Quixote is one that can be said to pervade Turgenev’s own works.

It is worth noting that Fyodor Dostoevsky, who had just returned from exile in Siberia, was present at this speech, for eight years later he was to write The Idiot, a novel whose tragic hero, Prince Myshkin resembles Don Quixote in many respects.

Turgenev, whose knowledge of Spanish, thanks to his contact with Pauline Viardot García and her family, was good enough for him to have considered translating Cervantes’s novel into Russian, played an important role in introducing this immortal figure of world literature into the Russian context.

Fathers and Sons (”???? ? ????”), Turgenev’s most famous and enduring novel, appeared in 1862. Its leading character, Bazarov, was in turns heralded and reviled as either a glorification or a parody of the ‘new men’ of the 1860s. However, the issues treated in the novel transcend the merely contemporary. Many radical critics at the time (with the notable exception of Dimitri Pisarev) did not take Fathers and Sons seriously and, after the relative critical failure of his masterpiece, Turgenev was disillusioned and started to write less.

Turgenev’s next novel, Smoke (”???”), was published in 1867 and was again received less than enthusiastically in his native country, as well as triggering a quarrel with Fyodor Dostoevsky in Baden Baden.

His last substantial work attempting to do justice to the problems of contemporary Russian society, Virgin Soil (”????”), was published in 1877.

Turgenev wrote on themes similar to those found in the works of Leo Tolstoy and Fyodor Dostoevsky, but he did not approve of the religious and moral preoccupations that his two great contemporaries brought to their artistic creation.

Turgenev was closer in temperament to his friends Gustave Flaubert and Theodor Storm, the North German poet and master of the novella form who also often dwelt on memories of the past and evoked the beauty of nature.

Turgenev’s artistic purity made him a favorite of like-minded novelists of the next generation, such as Henry James Junior and Joseph Conrad, both of whom greatly preferred Turgenev to Leo Tolstoy and Fyodor Dostoevsky.

Henry James Junior, who wrote no fewer than five critical essays on Turgenev’s work, claimed that “his merit of form is of the first order” (1873) and praised his “exquisite delicacy”, which “makes too many of his rivals appear to hold us in comparison by violent means, and introduce us in comparison to vulgar things” (1896).

The notoriously critical Vladimir Nabokov praised Turgenev’s “plastic musical flowing prose”, but criticized his “labored epilogues” and “banal handling of plots.” Vladimir Nabokov stated that Turgenev “is not a great writer, though a pleasant one”, and ranked him fourth among nineteenth century Russian prose writers, behind Leo Tolstoy, Nikolai Gogol, and Anton Chekhov but ahead of Fyodor Dostoevsky.