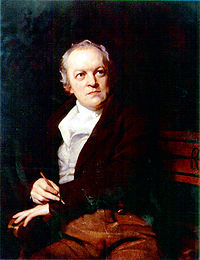 William Blake also knew Erasmus Alvey Darwin, and he engraved more than 100 figures for the Wedgwood catalogue in 1815,

James John Garth Wilkinson was a Homeopathic physician, translator and biographer of Swedenborg (based on the work of Emanuel Swedenborg), and a writer on a variety of religious, medical and social topics. He edited the first letter press edition of William Blake’s Songs of Innocence and Experience.

William Blake was born in 28A Broad Street, Golden Square, London, England on 28 November 1757, to a middle-class family. He was the third of 7 children, two of whom died in infancy. Blake’s father, James, was a hosier. William never attended school, and was educated at home by his mother.

The Blakes were Dissenters, and are believed to have belonged to the Moravian Church. The Bible was an early and profound influence on Blake, and would remain a source of inspiration throughout his life.

Blake started engraving copies of drawings of Greek antiquities purchased for him by his father, a practice that was then preferred to actual drawing. Within these drawings Blake found his first exposure to classical forms through the work of Raphael, Michelangelo, Marten Heemskerk and Albrecht Dürer.

His parents knew enough of his headstrong temperament that he was not sent to school but was instead enrolled in drawing classes. He read avidly on subjects of his own choosing. During this period, Blake was also making explorations into poetry; his early work displays knowledge of Ben Jonson and Edmund Spenser.

On 4 August 1772, Blake became apprenticed to engraverJames Basire of Great Queen Street, for the term of seven years. At the end of this period, at the age of 21, he was to become a professional engraver…

After two years James Basire sent his apprentice to copy images from the Gothic churches in London (it is possible that this task was set in order to break up a quarrel between Blake and James Parker, his fellow apprentice), and his experiences in Westminster Abbey contributed to the formation of his artistic style and ideas; the Abbey of his day was decorated with suits of armour, painted funeral effigies and varicoloured waxworks…

In the long afternoons Blake spent sketching in the Abbey, he was occasionally interrupted by the boys of Westminster School, one of whom “tormented” Blake so much one afternoon that he knocked the boy off a scaffold to the ground, “upon which he fell with terrific Violence”.

Blake beheld more visions in the Abbey, of a great procession of monks and priests, while he heard “the chant of plain song and chorale”.

In 1778, Blake became a student at the Royal Academy in Old Somerset House, near the Strand. While the terms of his study required no payment, he was expected to supply his own materials throughout the six year period. There, he rebelled against what he regarded as the unfinished style of fashionable painters such as Rubens, championed by the school’s first president, Joshua Reynolds…

… in June 1780, Blake was walking towards Basire’s shop in Great Queen Street when he was swept up by a rampaging mob that stormed Newgate Prison in London.They attacked the prison gates with shovels and pickaxes, set the building ablaze, and released the prisoners inside. Blake was reportedly in the front rank of the mob during this attack.

These riots, in response to a parliamentary bill revoking sanctions against Roman Catholicism, later came to be known as the Gordon Riots. They provoked a flurry of legislation from the government of George III, as well as the creation of the first police force…

In 1782, Blake met John Flaxman, who was to become his patron, and Catherine Boucher, who was to become his wife…  Later, in addition to teaching Catherine to read and write, Blake trained her as an engraver. Throughout his life she would prove an invaluable aid to him, helping to print his illuminated works and maintaining his spirits throughout numerous misfortunes.

At this time George Cumberland, one of the founders of the National Gallery, became an admirer of Blake’s work. Blake’s first collection of poems, Poetical Sketches, was published circa 1783.

After his father’s death, William and his brother Robert opened a print shop in 1784, and began working with radical publisher Joseph Johnson. Johnson’s house was a place of meeting for some of the leading intellectual dissidents of the time in England: Joseph Priestley, scientist; Richard Price, philosopher; John Henry Fuseli; Mary Wollstonecraft, an early feminist; and Thomas Paine, American revolutionary.

Blake illustrated Original Stories from Real Life (1788; 1791) by Mary Wollstonecraft. They seem to have shared some views on sexual equality and the institution of marriage, but there is no evidence proving without doubt that they actually met. In 1793’s Visions of the Daughters of Albion, Blake condemned the cruel absurdity of enforced chastity and marriage without love and defended the right of women to complete self fulfillment.

In 1788, at the age of 31, Blake began to experiment with relief etching, a method he would use to produce most of his books, paintings, pamphlets and, of course, his poems, including his longer ‘prophecies’ and his masterpiece the “Bible.” The process is also referred to as illuminated printing, and final products as illuminated books or prints. Illuminated printing involved writing the text of the poems on copper plates with pens and brushes, using an acid-resistant medium. Illustrations could appear alongside words in the manner of earlier illuminated manuscripts.

Blake used illuminated printing for most of his well known works, including Songs of Innocence and Experience, The Book of Thel, The Marriage of Heaven and Hell, and Jerusalem.

Blake’s marriage to Catherine remained a close and devoted one until his death. Blake taught Catherine to write, and she helped him to colour his printed poems…William and Catherine’s first daughter and last child might be Thel described in The Book of Thel who was conceived as dead.

In 1800, Blake moved to a cottage at Felpham in Sussex (now West Sussex) to take up a job illustrating the works of William Hayley, a minor poet. It was in this cottage that Blake wrote Milton: a Poem (published between 1805 and 1808). The preface to this work includes a poem beginning “And did those feet in ancient time”, which became the words for the anthem, Jerusalem…

Blake’s trouble with authority came to a head in August 1803, when he was involved in a physical altercation with a soldier called John Schofield.Blake was charged not only with assault, but also with uttering seditious and treasonable expressions against the King. Schofield claimed that Blake had exclaimed, “Damn the king. The soldiers are all slaves.”

Blake would be cleared in the Chichester assizes of the charges. According to a report in the Sussex county paper, “The invented character of [the evidence] was … so obvious that an acquittal resulted.” Schofield was later depicted wearing “mind forged manacles” in an illustration to Jerusalem.

Blake returned to London in 1804 and began to write and illustrate Jerusalem (1804–1820), his most ambitious work. Having conceived the idea of portraying the characters in Chaucer’s Canterbury Pilgrims, Blake approached the dealer Robert Cromek, with a view to marketing an engraving. Knowing that Blake was too eccentric to produce a popular work, Robert Cromek promptly commissioned Thomas Stothard to execute the concept. When Blake learned that he had been cheated, he broke off contact with Thomas Stothard, formerly a friend.

He also set up an independent exhibition in his brother’s shop, designed to market his own version of the Chaucer illustration, along with other works. As a result he wrote his Descriptive Catalogue (1809)…

He was introduced by George Cumberland to a young artist named John Linnell. Through John Linnell he met Samuel Palmer, who belonged to a group of artists who called themselves the Shoreham Ancients. This group shared Blake’s rejection of modern trends and his belief in a spiritual and artistic New Age.

Later in his life Blake began to sell a great number of his works, particularly his Bible illustrations, to Thomas Butts, a patron who saw Blake more as a friend than a man whose work held artistic merit; this was typical of the opinions held of Blake throughout his life.

The commission for Dante’s Divine Comedy came to Blake in 1826 through John Linnell, with the ultimate aim of producing a series of engravings. Blake’s death in 1827 would cut short the enterprise, and only a handful of the watercolours were completed, with only seven of the engravings arriving at proof form…

On the day of his death, Blake worked relentlessly on his Dante series. Eventually, it is reported, he ceased working and turned to his wife, who was in tears by his bedside. Beholding her, Blake is said to have cried, “Stay Kate! Keep just as you are – I will draw your portrait – for you have ever been an angel to me.” Having completed this portrait (now lost), Blake laid down his tools and began to sing hymns and verses.At six that evening, after promising his wife that he would be with her always, Blake died…

From a young age, William Blake claimed to have seen visions. The first of these visions may have occurred as early as the age of four when, according to one anecdote, the young artist “saw God” when God “put his head to the window”, causing Blake to break into screaming.

At the age of eight or ten in Peckham Rye, London, Blake claimed to have seen “a tree filled with angels, bright angelic wings bespangling every bough like stars.”

Though all evidence suggests that his parents were largely supportive, his mother seems to have been especially so, and several of Blake’s early drawings and poems decorated the walls of her chamber. On another occasion, Blake watched haymakers at work, and thought he saw angelic figures walking among them. Blake claimed to experience visions throughout his life…

*On 17th April 1848, James John Garth Wilkinson dined out with Ralph Waldo Emerson and Henry Crabb Robinson. Clement John Wilkinson quotes from one of James John Garth Wilkinson’s letters to his wife Emma about this meeting ‘Crabb Robinson is one of the most entertaining and interesting old gentlemen I ever met. He is one of the Council of University College, an old friend of Mr. Tulk’s (Charles Augustus Tulk) and one of the executors of Flaxman (John Flaxman 1755 – 1826) . He knew Blake well… it was he who gave Blake 5 guineas for the Songs of Innocence. He warmly invited me to call upon him, when he will show me several of Blake’s Originals, both poems and pictures.’  Clement John Wilkinson, James John Garth Wilkinson; A Memoir of His Life, with a Selection of His Letters. (Kegan Paul, Trench, Trubner & Co, 1911). Page 22.