Paul de Musset 1804 - 1880 was famous for being the brother of a famous poet Alfred de Musset, and for writing his biography and his Complete Works, though Paul de Musset did also write several books himself.

Paul de Musset was a patient of homeopath Antoine Henri Petroz. and both brothers were colleagues of David Ferdinand Koreff.

“Whom do you believe Dr. Petroz to be?” said he.

“But, my dear Doctor, answered de Musset, permit me, I pray you… ”

But when de Musset showed himself unwilling to desist, Antoine Henri Petroz said: “It seems you insist on paying Dr. Petroz, then my dear friend, if the payment should be commensurate, embrace him.”

Antoine Henri Petroz refused the money. “Do you then desire to insult me, and have you forgotten that I was your father’s faithful friend?”

Paul de Mussett married Aimee d’Alton (even though she had been his brother Alfred’s mistress). 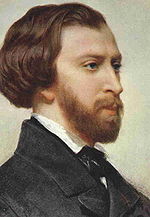 Alfred Musset was born in Paris. His family was upper class, but he was poor and his father worked in various key government positions, but never gave his son any money and it was under his direction in 1821, that a complete edition of Rousseau’s work was published).

His mother was similarly accomplished, and her role as a society hostess, - for example her drawing room parties, luncheons, and dinners, held in the Musset residence  left a lasting impression on young Alfred.

Early indications of Musset’s boyhood talents were seen by his fondness for acting impromptu mini plays based upon episodes from old romance stories he had read. Years later, elder brother Paul de Musset would preserve these, and many other details, for posterity, in a biography on his famous younger brother.

Alfred de Musset entered the collège Henri IV at the age of nine, where in 1827 he won the Latin essay prize in the Concours général. With the help of Paul Foucher, Victor Hugo’s brother in law, he began to attend, at the age of 17, the Cénacle, the literary salon of Charles Nodier at the Bibliothèque de l’Arsenal.

After attempts at careers in medicine (which he gave up owing to a distaste for dissections), law, drawing, English and piano, he became one of the first Romantic writers, with his first collection of poems, Contes d’Espagne et d’Italie (1829, Tales of Spain and Italy). By the time he reached the age of 20, his rising literary fame was already accompanied by a sulphurous reputation fed by his dandy side.

He was the librarian of the French Ministry of the Interior under the July Monarchy. During this time he also involved himself in polemics during the Rhine crisis of 1840, caused by the French prime minister Adolphe Thiers, who as Minister of the Interior had been Musset’s superior. Adolphe Thiers had demanded that France should own the left bank of the Rhine (described as France’s “natural boundary”), as it had under Napoleon, despite the territory’s German population.

These demands were rejected by German songs and poems, including Nikolaus Becker’s Rheinlied, which contained the verse: “Sie sollen ihn nicht haben, den freien, deutschen Rhein …” (They shall not have it, the free, German Rhine). Musset answered to this with a poem of his own: “Nous l’avons eu, votre Rhin allemand” (We’ve had it, your German Rhine).

The tale of his celebrated love affair with George Sand, which lasted from 1833 to 1835, is told from his point of view in his autobiographical novel, La Confession d’un Enfant du Siècle (The Confession of a Child of the Age, made into a film, Children of the Century), and from her point of view in her Elle et lui. Musset’s Nuits (1835–1837, Nights) trace his emotional upheaval of his love for George Sand, from early despair to final resignation.

Musset was dismissed from his post as librarian after the revolution of 1848, but he was appointed librarian of the Ministry of Public Instruction during the Second Empire.

Alfred de Musset died on 2 May 1857, from a rare heart condition (today known as Musset’s Syndrome). He was buried in Père Lachaise Cemetery in Paris.