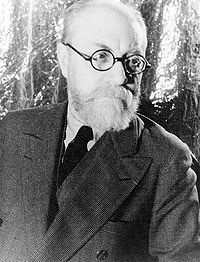 Henri Matisse 1869 – 1954 was a French artist, known for his use of colour and his fluid, brilliant and original draughtsmanship. As a draughtsman, printmaker, and sculptor, but principally as a painter, Matisse is one of the best known artists of the 20th century.

Born Henri Emile Benoit Matisse in Le Cateau Cambrésis, Nord Pas de Calais, France, he grew up in Bohain en Vermandois in Northeastern France, where his parents owned a seed business. He was their first son. In 1887 he went to Paris to study law, working as a court administrator in Le Cateau Cambrésis after gaining his qualification.

He first started to paint in 1889, when his mother had brought him art supplies during a period of convalescence following an attack of appendicitis. He discovered “a kind of paradise” as he later described it, and decided to become an artist, deeply disappointing his father.

In 1891 he returned to Paris to study art at the Académie Julian and became a student of William Adolphe Bouguereau and Gustave Moreau. Initially he painted still lifes and landscapes in the traditional Flemish style, at which he achieved reasonable proficiency. Chardin was one of Matisse’s most admired painters; as an art student he made copies of four Chardin paintings in the Louvre.

In 1896 he exhibited 5 paintings in the salon of the Société Nationale des Beaux Arts, and the state bought two of his paintings. In 1897 and 1898, he visited the painter John Peter Russell on the island Belle Île off the coast of Brittany. Russell introduced him to Impressionism and to the work of Vincent van Gogh (who had been a good friend of John Peter Russell but was completely unknown at the time). Matisse’s style changed completely, and he would later say ”Russell was my teacher, and Russell explained colour theory to me.”

Influenced by the works of the post Impressionists Paul Cezanne, Paul Gauguin, Vincent van Gogh and Paul Signac, and also by Japanese art, he made colour a crucial element of his paintings.

Many of his paintings from 1899 to 1905 make use of a pointillist technique adopted from Signac. In 1898, he went to London to study the paintings of Turner and then went on a trip to Corsica.

With the model Caroline Joblau, he had a daughter, Marguerite, born in

His first solo exhibition was at Vollard’s gallery in 1904, without much success. His fondness for bright and expressive colour became more pronounced after he moved southwards in 1905 to work with Andre Derain and spent time on the French Riviera. The paintings of this period are characterized by flat shapes and controlled lines, with expression dominant over detail.

In 1905, Matisse and a group of artists now known as ”Fauves” exhibited together in a room at the Salon d’Automne. The paintings expressed emotion with wild, often dissonant colors, without regard for the subject’s natural colors. Matisse showed Open Window and Woman with the Hat at the Salon.

Critic Louis Vauxcelles described the work with the phrase “Donatello au milieu des fauves!” (Donatello among the wild beasts), referring to a Renaissance type sculpture that shared the room with them. His comment was printed on 17 October 1905 in Gil Blas, a daily newspaper, and passed into popular usage.

The pictures gained considerable condemnation, such as “A pot of paint has been flung in the face of the public” from the critic Camille Mauclair, but also some favourable attention. The painting that was singled out for attacks was Matisse’s Woman with a Hat, which was bought by Gertrude Stein: this had a very positive effect on Matisse, who was suffering demoralization from the bad reception of his work.

Matisse was recognized as a leader of the group, along with Andre Derain; the two were friendly rivals, each with his own followers. Other members were Georges Braque, Raoul Dufy and Maurice de Vlaminck. The Symbolist painter Gustave Moreau was the movement’s inspirational teacher, and he did much for the era; a professor at the École des Beaux Arts in Paris, he pushed his students to think outside of the lines of formality and to follow their visions.

In 1907 Guillaume Apollinaire, commenting about Matisse in an article published in La Falange, said, “We are not here in the presence of an extravagant or an extremist undertaking: Matisse’s art is eminently reasonable.”

But Matisse’s work of the time also encountered vehement criticism, and it was difficult for him to provide for his family. His controversial 1907 painting Nu bleu was burned in effigy at the Armory Show in Chicago in 1913.

The decline of the Fauvist movement, after 1906, did nothing to affect the rise of Matisse; many of his finest works were created between 1906 and 1917, when he was an active part of the great gathering of artistic talent in Montparnasse, even though he did not quite fit in, with his conservative appearance and strict bourgeois work habits.

Matisse had a long association with the Russian art collector Sergei Shchukin. He created one of his major works La Danse specially for Sergei Shchukin as part of a two painting commission, the other painting being Music, 1910. An earlier version of La Danse (1909) is in the collection of The Museum of Modern Art in New York City.

Around 1904 he met Pablo Picasso, who was 12 years younger than him. The two became life long friends as well as rivals and are often compared; one key difference between them is that Matisse drew and painted from nature, while Pablo Picasso was much more inclined to work from imagination.

The subjects painted most frequently by both artists were women and still lifes, with Matisse more likely to place his figures in fully realized interiors. Matisse and Pablo Picasso were first brought together at the Paris salon of Gertrude Stein and her companion Alice B Toklas.

During the first decade of the 20th century, Americans in Paris Gertrude Stein, her brothers Leo Stein, Michael Stein and Michael’s wife Sarah were important collectors and supporters of Matisse’s paintings. In addition Gertrude Stein’s two American friends from Baltimore, Clarabel and Etta Cone, became major patrons of Matisse and Picasso, collecting hundreds of their paintings. The Cone collection is now exhibited in the Baltimore Museum of Art.

His friends organized and financed the Académie Matisse in Paris, a private and non-commercial school in which Matisse instructed young artists. It operated from 1911 until 1917. Hans Purrmann and Sarah Stein were amongst several of his most loyal students.

In 1917 Matisse relocated to Cimiez on the French Riviera, a suburb of the city of Nice. His work of the decade or so following this relocation shows a relaxation and a softening of his approach. This “return to order” is characteristic of much art of the post World War I period, and can be compared with the neoclassicism of Pablo Picasso and Igor Stravinsky, and the return to traditionalism of Derain.

His orientalist odalisque paintings are characteristic of the period; while popular, some contemporary critics found this work shallow and decorative.

After 1930 a new vigor and bolder simplification appear in his work. American art collector Albert C Barnes convinced him to produce a large mural for the Barnes Foundation, The Dance II, which was completed in 1932. The Foundation owns several dozen other Matisse paintings.

He and his wife of 41 years separated in 1939. In 1941 he was diagnosed with cancer and, following surgery, he started using a wheelchair. Until his death he would be cared for by a Russian woman, Lidia Delektorskaya, formerly one of his models. With the aid of assistants he set about creating cut paper collages, often on a large scale, called gouaches découpés.

His Blue Nudes series feature prime examples of this technique he called “painting with scissors”; they demonstrate the ability to bring his eye for colour and geometry to a new medium of utter simplicity, but with playful and delightful power.

In 1947 he published Jazz, a limited edition book containing prints of colorful paper cut collages, accompanied by his written thoughts. In the 1940s he also worked as a graphic artist and produced black and white illustrations for several books and over one hundred original lithographs at the famous Mourlot Studios in Paris.

Matisse, thoroughly unpolitical, was shocked when he heard that his daughter Marguerite, who had been active in the Résistance during the war, was tortured and imprisoned in the Ravensbrück concentration camp. In 1951 he finished a four year project of designing the interior, the glass windows and the decorations of the Chapelle du Rosaire de Vence. This project was the result of the close friendship between Matisse and Sister Jacques Marie. He had hired her as a nurse and model in 1941 before she became a Dominican Nun and they met again in Vence and started the collaboration, a story related in her 1992 book Henri Matisse: La Chapelle de Vence and in the 2003 documentary “A Model for Matisse”.

Matisse died of a heart attack at the age of 84 in 1954. He is interred in the cemetery of the Monastère Notre Dame de Cimiez, near Nice. A museum dedicated to his work was opened nearby in 1952, just before his death, and is now the third largest collection of Matisse works in France.