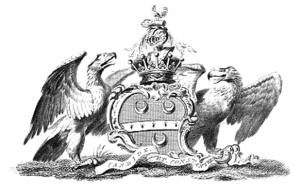 Mary Deerhurst was an ardent supporter of homeopathy and a friend of Frederick Hervey Foster Quin.

George William Coventry, 8th Earl of Coventry known as Viscount Deerhurst from 1809 to 1831, was a British peer and Tory Member of Parliament.

Coventry was the eldest son of George Coventry, 7th Earl of Coventry, and his wife Peggy (née Pitches), and was educated at Christ Church, Oxford. He was elected to the House of Commons as one of two representatives for Worcester in 1816, a seat he held until 1826. In 1831 he succeeded his father in the earldom and entered the House of Lords. In 1838 he served as Lord Lieutenant of Worcestershire.

He died in May 1843, aged 58. His son from his first marriage, George William Coventry, Viscount Deerhurst, had predeceased him and he was succeeded in his titles by his grandson George. Lady Coventry died on 11 September 1845, aged 54.