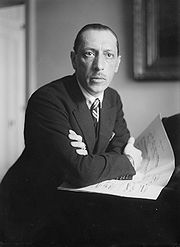 Igor Fyodorovich Stravinsky 1882 – 1971 was a Russian composer, considered by many to be the most influential composer of 20th century music.

Igor Stravinsky was reared on homeopathic remedies, as his parents always kept a cupboard containing aconite and belladonna and ‘other such remedies’, to which Stravinsky would often ‘help himself’.

Stravinsky was born in Oranienbaum (renamed Lomonosov in 1948), Russia and brought up in Saint Petersburg, to a Ukrainian father and a Russian mother. His childhood, he recalled in his autobiography, was troubled: “I never came across anyone who had any real affection for me.”

His father, Fyodor Stravinsky, was a bass singer at the Mariinsky Theater in Saint Petersburg, and the young Stravinsky began piano lessons and later studied music theory and attempted some composition.

In 1890, Stravinsky saw a performance of Pyotr Ilyich Tchaikovsky’s ballet The Sleeping Beauty at the Mariinsky Theater; the performance, his first exposure to an orchestra, mesmerized him. At fourteen, he had mastered Mendelssohn’s Piano Concerto in G minor, and the next year, he finished a piano reduction of one of Alexander Glazunov’s string quartets.

Despite his enthusiasm for music, his parents expected him to become a lawyer. Stravinsky enrolled to study law at the University of Saint Petersburg in 1901, but was ill suited for it, attending fewer than fifty class sessions in four years.

After the death of his father in 1902, he had already begun spending more time on his musical studies. Because of the closure of the university in the spring of 1905, in the aftermath of Bloody Sunday, Stravinsky was prevented from taking his law finals, and received only a half-course diploma, in April 1906. Thereafter, he concentrated on music. On the advice of Nikolai Rimsky Korsakov, probably the leading Russian composer of the time, he decided not to enter the Saint Petersburg Conservatoire; instead, in 1905, he began to take twice weekly private tutelage from Nikolai Rimsky Korsakov, who became like a second father to him.

In 1905 he was betrothed to his cousin Katerina Nossenko, whom he had known since early childhood. They were married on 23 January 1906, and their first two children, Fyodor and Ludmilla, were born in 1907 and 1908 respectively.

In 1909, his Feu d’artifice (Fireworks), was performed in Saint Petersburg, where it was heard by Sergei Diaghilev, the director of the Ballets Russes in Paris. Sergei Diaghilev was sufficiently impressed to commission Stravinsky to carry out some orchestrations, and then to compose a full length ballet score, L’Oiseau de feu The Firebird.

Stravinsky travelled to Paris in 1910 to attend the premiere of The Firebird. His family soon joined him, and decided to remain in the West for a time. He moved to Switzerland, where he lived until 1920 in Clarens and Lausanne. During this time he composed three further works for the Ballets Russes - Petrushka (1911), written in Lausanne, and Le Sacre du printemps The Rite of Spring (1913) and Pulcinella, both written in Clarens.

While the Stravinskys were in Switzerland, their second son, Soulima (who later became a minor composer), was born in 1910; and their second daughter, Maria Milena, was born in 1913. During this last pregnancy, Katerina was found to have tuberculosis, and she was placed in a Swiss sanatorium for her confinement.

After a brief return to Russia in July 1914 to collect research materials for Les Noces, Stravinsky left his homeland and returned to Switzerland just before the outbreak of World War I brought about the closure of the borders. He was not to return to Russia for nearly fifty years. Stravinsky was one of the few Eastern Orthodox or Russian Orthodox community representatives living in Switzerland at that time and is still remembered as such in Switzerland to date.

He had a significant artistic relationship with the Swiss philanthropist Werner Reinhart. He approached Werner Reinhart for financial assistance when he was writing Histoire du soldat (The Soldier’s Tale).

The first performance was conducted by Ernest Ansermet on 28 September 1918, at the Theatre Municipal de Lausanne. Werner Reinhart sponsored and to a large degree underwrote this performance. In gratitude, Stravinsky dedicated the work to Werner Reinhart, and even gave him the original manuscript.

Werner Reinhart continued his support of Stravinsky’s work in 1919 by funding a series of concerts of his recent chamber music. These included a suite of five numbers from The Soldier’s Tale, arranged for clarinet, violin, and piano, which was a nod to Werner Reinhart, who was an excellent amateur clarinettist.

The suite was first performed on 8 November 1919, in Lausanne, long before the better known suite for the seven original instruments became widely known. In gratitude for Werner Reinhart’s ongoing support, Stravinsky dedicated his Three Pieces for Clarinet (composed October-November 1918) to Werner Reinhart. Werner Reinhart later founded a music library of Stravinskiana at his home in Winterthur.

Stravinsky moved to France in 1920, where he formed a business and musical relationship with the French piano manufacturer Ignaz Pleyel. Ignaz Pleyel essentially acted as his agent in collecting mechanical royalties for his works, and in return provided him with a monthly income and a studio space in which to work and to entertain friends and business acquaintances.

Stravinsky also arranged (and to some extent re-composed) many of his early works for the Pleyela, Ignaz Pleyel’s brand of player piano. Stravinsky did so in a way that made full use of the piano’s 88 notes, without regard for the number or span of human fingers and hands. These were not recorded rolls, but were instead marked up from a combination of manuscript fragments and handwritten notes by the French musician, Jacques Larmanjat (musical director of Ignaz Pleyel’s roll department).

Stravinsky later claimed that his intention had been to give listeners a definitive version of the performances of his music, but since the rolls were not recordings, it is difficult to see how effective this intention could have been in practice. While many of these works are now part of the standard repertoire, at the time many orchestras found his music beyond their capabilities and unfathomable.

Major compositions issued on Pleyela piano rolls include The Rite of Spring, Petrushka, Firebird, Les Noces and Song of the Nightingale. During the 1920s he also recorded Duo Art rolls for the Aeolian Company in both London and New York, not all of which survive.

After a short stay near Paris, Stravinsky moved with his family to the south of France. He returned to Paris in 1934, to live at the rue Faubourg St.Honoré. Stravinsky later remembered this as his last and unhappiest European address; his wife’s tuberculosis infected his eldest daughter Ludmila, and Stravinsky himself. Ludmila died in 1938, Katerina in the following year. Stravinsky spent five months in hospital, during which time his mother also died.

Although his marriage to Katerina endured for 33 years, the true love of his life, and later his partner until his death, was the woman who became his second wife Vera de Bosset. When Stravinsky met Vera de Bosset in Paris in February 1921, she was married to the painter and stage designer Serge Sudeikin, however they soon began an affair which led to her leaving her husband.

From then until Katerina’s death from cancer in 1939, Stravinsky led a double life, spending some of his time with his first family and the rest with Vera. Katerina soon learned of the relationship and accepted it as inevitable and permanent.

During his latter years in Paris, Stravinsky had developed professional relationships with key people in the United States; he was already working on the Symphony in C for the Chicago Symphony Orchestra, and had agreed to lecture at Harvard during the academic year of 1939-40.

When World War II broke out in September 1939, Stravinsky moved to the United States. Vera followed him early in the next year and they were married in Bedford, MA, USA, on 9 March 1940.

Stravinsky settled down in the Los Angeles area (1260 North Wetherly Drive, West Hollywood) where, in the end, he spent more time as a resident than any other city during his lifetime. He became a naturalized citizen in 1946.

Stravinsky had adapted to life in France, but moving to America at the age of 58 was a very different prospect. For a time, he preserved a ring of emigré Russian friends and contacts, but eventually found that this did not sustain his intellectual and professional life.

He was drawn to the growing cultural life of Los Angeles, especially during World War II, when so many writers, musicians, composers, and conductors settled in the area; these included Otto Klemperer, Thomas Mann, Franz Werfel, George Balanchine and Arthur Rubinstein.

He lived fairly near to Arnold Schoenberg, though he did not have a close relationship with him. Bernard Holland notes that he was especially fond of British writers who often visited him in Beverly Hills, “like W H Auden, Christopher Isherwood, Dylan Thomas (who shared the composer’s taste for hard spirits) and, especially, Aldous Huxley, with whom Stravinsky spoke in French.”

He settled into life in Los Angeles and sometimes conducted concerts with the Los Angeles Philharmonic at the famous Hollywood Bowl as well as throughout the U.S. When he planned to write an opera with W. H. Auden, the need to acquire more familiarity with the English-speaking world coincided with his meeting the conductor and musicologist Robert Craft. Robert Craft lived with Stravinsky until the composer’s death, acting as interpreter, chronicler, assistant conductor, and factotum for countless musical and social tasks.

On April 15, 1940, Stravinsky’s unconventional major seventh chord in his arrangement of the Star Spangled Banner led to his arrest by the Boston police for violating a federal law that prohibited the reharmonization of the National Anthem.

In 1959, Stravinsky was awarded the Sonning Award, Denmark’s highest musical honour. In 1962, he accepted an invitation to return to Leningrad (today known as Saint Petersburg) for a series of concerts. He spent more than two hours speaking with Soviet leader Nikita Khrushchev, who urged him to return to the Soviet Union.

Despite the invitation, Stravinsky remained settled in the West. In 1969, he moved to New York where he lived his last years at Essex House. Two years later, he died at the age of 88 in New York City and was buried in Venice on the cemetery island of San Michele.

His grave is close to the tomb of his long time collaborator Sergei Diaghilev. Stravinsky’s professional life had encompassed most of the 20th century, including many of its modern classical music styles, and he influenced composers both during and after his lifetime. He has a star on the Hollywood Walk of Fame at 6340 Hollywood Boulevard and posthumously received the Grammy Award for Lifetime Achievement in 1987.

Stravinsky was a friend of the family of Philip Andrew Doria Pamphili Landi, the son in law of John Talbot 16th Earl of Shrewsbury,