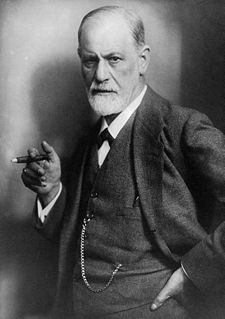 Sigmund Freud 1856 – 1939 was a Jewish Austrian psychiatrist who founded the psychoanalytic school of psychology.

In a letter dated 27th March 1875, Sigmund Freud admitted to his friend Eduard Silberstein that (Paul C. Vitz, Sigmund Freud’s Christian Unconscious, (Gracewing Publishing, 1 Feb 1993). Page 54), under Frantz Brentano’s influence, he might one day be taken in by the scientific proofs of spiritualism, homeopathy and Louise Lateau (a Belgian Mystic who exhibited stigmata)… (David Livingston Smith, Freud’s philosophy of the unconscious, (Springer, 1999). Page 14).

In 1917, suggestions were made that Sigmund Freud had a precursor in James John Garth Wilkinson Sigmund Freud admitted that he was well aware of James John Garth Wilkinson and his writings. ‘… This concept of psychoanalysis was a brilliant idea for which Freud deserves all credit. It has not, however, been pointed out, so far as I am aware, that Freud had a forerunner in the idea, though not in it clinical and therapeutic application. In 1857, Dr. J J Garth Wilkinson…’ [Anon, The Bookman__, Volume 46,** (Dodd, Mead and Company, 1918).** Page 56. ; Anon, The Urologic and Cutaneous Review__, Volume 21,** (Urologic & Cutaneous Press, 1917). **Page 591] ‘… Freud cites as precedents both Schiller (as indicated in 1788 in correspondence with Kromer) and Dr. Garth Wilkinson (as described in his 1857 essay)…’ _Freud was stung by criticism from Havelock Ellis, and when reminded of these precursors (and others), Freud acknowledged his free association precursors and retorted ‘… _that the merit of discovery of psychoanalysis went to him who saw how to use what others had merely handled...’ Of course, this disclaimer completely ignored homeopathic case taking methodology, which Freud was also aware of, itself heavily influenced by the techniques of ancient mystery schools (Anon, The Journal of mental science, Volume 63, Association of Medical Officers of Asylums and Hospitals for the Insane (London, England), Medico-psychological Association of Great Britain and Ireland, Royal Medico-psychological Association, (Longman, Green, Longman & Roberts, 1917). Page 548. See also Sigmund Freud, James Strachey (Ed.), Collected Papers: Miscellaneous papers, 1888-1938, (Basic Books, 1959). Pages 101-102. See also Havelock Ellis, The philosophy of conflict, and other essays in war-time, (Ayer Publishing, 1 Jun 1919). Page 213. See also Sigmund Freud, Zur Vorgeshchichte der Analaystischen Technik, A Note on the Prehistory of the Technique of Analaysis (1920 GW XII (pages 309-312) and SE 18 (pages 263-265) as quoted in Patrick Mahony, Psychoanalysis and Discourse, (Psychology Press, 9 Mar 2004). Page 14. See also Philip Rieff, Freud: The Mind of the Moralist, (University of Chicago Press, 15 May 1979). Pages 89).

From http://en.wikipedia.org/wiki/Sigmund_Freud Sigmund Freud was born on 6 May 1856 to Galician Jewish parents in P?íbor (German: Freiberg in Mähren), Moravia, Austrian Empire, now Czech Republic. His father Jakob was 41, a wool merchant, and had two children by a previous marriage.

His mother Amalié (née Nathansohn), the third wife of Jakob, was 21. He was the first of their eight children and owing to his precocious intellect, his parents favoured him over his siblings from the early stages of his childhood; and despite their poverty, they sacrificed everything to give him a proper education.

Due to the economic crisis of 1857, Freud’s father lost his business, and the family moved first to Leipzig before settling in Vienna. In 1865, Sigmund entered the Leopoldstädter Kommunal-Realgymnasium, a prominent high school. Freud was an outstanding pupil and graduated the Matura in 1873 with honors. After planning to study law,

Freud joined the medical faculty at University of Vienna to study under Darwinist Prof, Karl Claus. At that time, eel life history was still unknown, and due to their mysterious origins and migrations, a racist association was often made between eels and Jews and Gypsies. In search for their male sex organs, Freud spent four weeks at the Austrian zoological research station in Trieste, dissecting hundreds of eels without finding more than his predecessors such as Simon von Syrski.

In 1876, he published his first paper about “the testicles of eels” in the Mitteilungen der österreichischen Akademie der Wissenschaften, conceding that he could not solve the matter either. Frustrated by the lack of success that would have gained him fame, Freud chose to change his course of study…

In 1874, the concept of “psychodynamics” was proposed with the publication of Lectures on Physiology by German physiologist Ernst Wilhelm von Brücke who, in coordination with physicist Hermann von Helmholtz, one of the formulators of the first law of thermodynamics (conservation of energy), supposed that all living organisms are energy systems also governed by this principle.

This was the starting point for Freud’s dynamic psychology of the mind and its relation to the unconscious. The origins of Freud’s basic model, based on the fundamentals of chemistry and physics, according to John Bowlby, stems from Brücke, Meynert, Breuer, Helmholtz, and Herbart.

In 1879, Freud interrupted his studies to complete his one year of obligatory military service, and in 1881 he received his Dr. med. (M.D.) with the thesis Über das Rückenmark niederer Fischarten (“on the spinal cord of lower fish species”).

In October 1885 Freud went to Paris on a traveling fellowship to study with Europe’s most renowned neurologist, Jean Martin Charcot. He was later to remember the experience of this stay as catalytic in turning him toward the practice of medical psychopathology and away from a less financially promising career in research neurology.

Jean Martin Charcot specialised in the study of hysteria and its susceptibility to hypnosis which he frequently demonstrated with patients on stage in front of an audience. Freud later turned away from hypnosis as a potential cure, favouring free association and dream analysis. Jean Martin Charcot himself questioned his own work on hysteria towards the end of his life.

After opening his own medical practice, specializing in neurology, Freud married Martha Bernays in 1886. Her father Berman was the son of Isaac Bernays, chief rabbi in Hamburg.

After experimenting with hypnosis on his neurotic patients, Freud abandoned this form of treatment as it proved ineffective for many, in favor of a treatment where the patient talked through his or her problems.

This came to be known as the “talking cure”, as the ultimate goal of this talking was to locate and release powerful emotional energy that had initially been rejected, and imprisoned in the unconscious mind. Freud called this denial of emotions “repression”, and he believed that it was often damaging to the normal functioning of the psyche, and could also retard physical functioning as well, which he described as “psychosomatic” symptoms. (The term “talking cure” was initially coined by the patient Anna O. who was treated by Freud’s colleague Josef Breuer.)

The “talking cure” is widely seen as the basis of psychoanalysis.Carl Gustav Jung initiated the rumor that a romantic relationship may have developed between Freud and his sister in law, Minna Bernays, who had moved into Freud’s apartment at 19 Berggasse in 1896…

In his 40s, Freud “had numerous psychosomatic disorders as well as exaggerated fears of dying and other phobias”. During this time Freud was involved in the task of exploring his own dreams, memories, and the dynamics of his personality development.

During this self analysis, he came to realize the hostility he felt towards his father, who had died in 1896,and “he also recalled his childhood sexual feelings for his mother, who was attractive, warm, and protective”…

After the publication of Freud’s books in 1900 and 1902, interest in his theories began to grow, and a circle of supporters developed in the following period. Freud often chose to disregard the criticisms of those who were skeptical of his theories, however, which earned him the animosity of a number of individuals, the most famous being Carl Gustav Jung, who originally supported Freud’s ideas.

Part of the reason for their fall out was due to Carl Gustav Jung’s growing commitment to religion and mysticism, which conflicted with Freud’s atheism.

In 1930, Freud received the Goethe Prize in appreciation of his contribution to psychology and to German literary culture. Three years later the Nazis took control of Germany and Freud’s books featured prominently among those burned and destroyed by the Nazis.

In March 1938, Nazi Germany annexed Austria in the Anschluss. This led to violent outbursts of anti Semitism in Vienna, and Freud and his family received visits from the Gestapo. Freud decided to go into exile “to die in freedom”. He and his family left Vienna in June 1938 and moved to Hampstead, London.

A heavy cigar smoker, Freud endured more than 30 operations during his life due to oral cancer. In September 1939 he prevailed on his doctor and friend Max Schur to assist him in suicide.

After reading Honore de Balzac’s La Peau de chagrin in a single sitting he said, “My dear Schur, you certainly remember our first talk. You promised me then not to forsake me when my time comes. Now it is nothing but torture and makes no sense any more.”

Max Schur administered three doses of morphine over many hours that resulted in Freud’s death on 23 September 1939. Three days after his death, Freud’s body was cremated at Golders Green Crematorium in England during a service attended by Austrian refugees, including the author Stefan Zweig.

His ashes were later placed in the crematorium’s columbarium. They rest in an ancient Greek urn which Freud had received as a present from Marie Bonaparte and which he had kept in his study in Vienna for many years.

After Martha Freud’s death in 1951, her ashes were also placed in that urn. Golders Green Crematorium has since also become the final resting place for Anna Freud and her lifelong friend Dorothy Burlingham, as well as for several other members of the Freud family.

Sigmund Freud was fascinated by the Occult, and he wrote ‘If I had to live my life over again, I would devote myself to psychical research rather than to psychoanalysis’. Sigmund Freud was a corresponding member of the Society of Psychical Research in 1911.