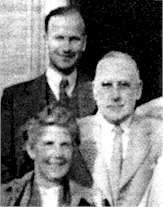 John Paterson was President of International Homeopathic Medical League in 1939.

John Paterson wrote The Bowel Nosodes, and he was responsible for introducing them into British homeopathy alongside Edward Bach and Charles Edwin Wheeler in the 1920s. John Paterson rightly understood that bowel bacteria were scavengers of disease, and so could be of use in homeopathy.

Paterson was a very interesting figure, a Glaswegian and very outspoken for a pragmatic and undogmatic form of homeopathy. He also worked in Bradford twice a week…

John Paterson, a co-worker of Edward Bach, concentrated on this research after 1929. He studied more deeply the characteristics of the bowel flora, especially their behavior in health, disease and in drug provings.

He examined more than 20,000 stool specimens and conducted research over 20 years. He came to the following conclusions: The non lactose fermenting non pathogenic bowel flora (B.coli) undergoes definite changes in the disease condition.

While this alternation in the nature of bowel flora might be a mere concomittant to the disease condition, there is reason to believe that the B.coli actually turns pathogenic. The balance of the bowel flora is disturbed in disease. Similar changes are also observed in drug provings.

Paterson advocated specific recommendation on potency, dose and repetition of bowel nosodes. He related each bowel nosode to a group of Homeopathic remedies.

Paterson believed that gram negative diplococci were directly related to the sycotic miasm. He grouped and typed the flora by continuous experiment and observation.

He was able to detect a definite relationship between certain drugs and certain types of bowel flora.

In1933 Paterson presented a paper on Sycotic co. In 1950 he published summary of his accumulated experience.

After his death in 1954, his wife Elizabeth Paterson continued the research.

Mr. Paterson was on the Management Board of the Hahnemann Hospital at 39 Bloomsbury Square.