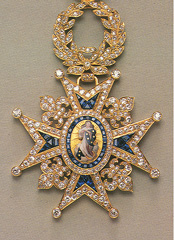 Francois Perrussel senior 1807 - 1872 was a French orthodox physician who converted to homeopathy to become a student of Samuel Hahnemann, and he was also the Editor of the Bulletin de l’ Art de Guêrir with Gottlieb Heinrich Georg Jahr.

Francois Perrussel used homeopathy successfully on the horses in the army, the results were so successful, he was refused permission to continue his clinical trials by the Minister of War!

Dr. Chauvet said: Homeopathy has met with a great loss in the death of Dr. F. Perrussel, suddenly stricken with apoplexy at the age of sixty five.

For some years he has passed the winter at Mentone, not at Cannes, as has been announced. Many journals of Lyon, Macon and Valence contain memoirs, but especially one, in the Lyon Salut Public, is worthy of quotation:

“A man who was by adoption a Lyonnais, and who was one of the most devoted propagators of Homeopathy, died at Mentone on December 9, 1872.

There are few left of the direct pupils of Samuel Hahnemann, and he was one of the most ardent of these disciples, Dr. Perrussel, pupil at our Lyceum, and for a long time interne to our hospital.

When the cholera first appeared in France, at Marseilles, a bronze medal was given to him for his valor. In 1849, at Nantes, during an epidemic of cholera which claimed many victims; in 1854 in Champagne, where he had an official commission from the government, he was faithful, and received for his devotion a gold medal. He also attended at Anjou, in 1857, a terrible epidemic of diphtheria. Some years later, in 1863, he was named Chevalier of the Order of Charles III.

He left two sons; one was a physician at Macon, the other was an officer of Spahis in Africa.

After having brilliantly defended his thesis for doctor at Montpellier in 1833, Perrussel returned to Lyon and became acquainted with that brilliant phalanx of physicians, Pierre Augustus Rapou Père, Dessaix, Gueyrard the elder, Jouru, Chazel, Tournier, Bravais, etc.

The following year, 1834, Perrussel was for some time secretary to Dessaix; he was then called to Dr. Gastier as aide in the hospital at Thoissey, where Gastier had introduced homeopathic medicine.

From that time his principles were fixed. For thirty seven years he was faithful to his mission as an homeopathic reformer, and his name is well known in Marseilles, Champagne and all the East. Perrussel left Saumur in 1861, going to Paris, where he edited for four years with Gottlieb Heinrich Georg Jahr, the Bulletin de l’ Art de Guêrir.

After it was stopped he retired to Bordeaux. He was introduced by Gottlieb Heinrich Georg Jahr and Simon Felix Camille Croserio to Samuel Hahnemann in Paris, and it was always to him a great honor to he called a pupil of the Master.

Perrussel was a great writer. Besides many articles in the homeopathic journals, notably in the Bulletin, and in some political journals, he published many important works, which are as follows: Trip of a Homoeopathic Physician to the Cholera at Marseilles in 1835, Letters on Homeopathy in_1817, _Criticism on Homeopathy and Allopathy in1846, The Truth in Medicine in 1846, The Sweating Sickness and the Cholera in 1856, Letter to the French Physicians by Comte Sebastien Gaeten Salvador Maxime Des Guidi in 1860, Guide to the Physician in the Choice of a Means of Cure in 1860, Homeopathy in the Senate in 1864.

In private life Perrussel was devoted as a husband and father, lively in disposition, frank and loyal. He was born at Saint Cyr, some miles from Lyon, about 1810 or 1812. His first studies were in Lyon, followed later by a course of medicine in Montpellier, where he was interne of a hospital.

What led him to Homeopathy? He had already prepared his thesis when he was visited by a friend, to whom he read it; the friend said he was not qualified to appreciate it and still less to judge its merits, “But in your quality as a friend of progress,” said the friend to him, “I wish to speak to you of the great discovery of a German doctor, which it is likely will greatly advance medical science.”

When the sweating sickness and cholera appeared in Champagne in 1854, Perrussel and Dr. Petit obtained a special commission from the Minister to carry medical aid to unhappy victims. Both were rewarded with gold medals. In 1847 he received a special apostolic letter from Pope Pius IX in remembrance of his work The Truth in Medicine Found and Demonstrated by the Laws of Universal Attraction.

He was corresponding member of the Surgical Circle of Montpellier, of the Society of Homeopathists of Leipzig, Leige, Madrid, Lyons, Paris, etc.

Francois Perucel, alternative spelling Perrussel was a Marian Exile who fled England under the reign of Mary I in 1554.