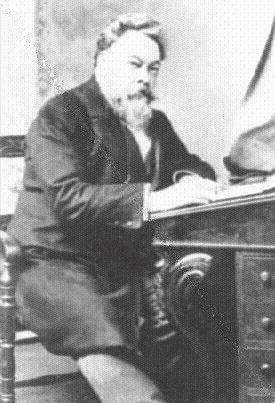 James Compton Burnett 1840 - 1901 MB Glasgow 1872 was a British orthodox physician who converted to homeopathy. He worked at the London Homeopathic Hospital and in private practice, and he succeeded Edward Barton Shuldham as Editor of The Homeopathic World,

James Compton Burnett was the homeopathic physician of Lewis Carroll,

James Compton Burnett’s first wife Agnes was the daughter of homeopathic pharmacist Edward Thomas. They had six children together. Burnett was also a great uncle of Marjorie Grace Blackie,

Burnett was born in Redlynch, England in 1840. He attended medical school in Vienna in 1865, where he remained 2 additional years studying anatomy, receiving a gold metal for his accomplishments in that field.

He graduated from Glasgow in 1872, and completed an internship for his MD degree at Barnhill Parochial Hospital and Asylum in Glasgow in 1876.

Burnett was converted to homeopathy during his internship, by his friend and colleague Alfred Edward Hawkes. He was contemporary with Richard Hughes, Robert Ellis Dudgeon, and John Henry Clarke.

In addition to the influence of homeopathy in his work, Burnett was highly inspired by a contemporary of Samuel Hahnemann’s, Johann Gottfried Rademacher…

Dr. Burnett was born July 20th 1840, near Salisbury, Wiltshire. He qualified with honours from Vienna [orthodox medical school] 1869; and then from Glasgow in 1876. He was awarded the Gold Medal in Anatomy upon graduation: “Passing through a brilliant examination in anatomy, lasting one hour and a half, the professor shook hands with him, saying that he had never examined a student with so brilliant and thorough a knowledge of anatomy.”

He studied homeopathy in Liverpool under John James Drysdale and Edward William Berridge, at first very secretively for fear of reprisals from allopathic colleagues.

Burnett was a great uncle of Marjorie Grace Blackie, and a great stimulator of interest in homeopathy, He was also an ‘Organ prescriber’ and supporter of Johann Gottfried Rademacher.

It was Richard Hughes’ book, A Manual of Pharmacodynamics, the first authoritative homeopathic textbook published in English, which had recruited Burnett himself and practically the whole of Burnett’s generation of rising young homeopaths in Britain.

But Richard Hughes was severely puritanical by temperament, a fundamentalist and a purist, resenting on the one hand all attempts to tamper with his own interpretations of what he regarded as revealed truth laid down Samuel Hahnemann, and detesting, on the other, an ad hoc, empirical or individual approach to clinical symptoms…

Harris Livermore Coulter page 82: In 1890, homeopath James Compton Burnett published 54 cured cases of tuberculosis in Five Years Experience in the New Cure of Consumption by Its Own Virus, treated with a remedy prepared from tuberculous sputum called bacillinum, which included a critique of Robert Koch’s ‘crude dilutions’, pointing out the ’aggravations’ Robert Koch’s patients had suffered, plus an explanation of homeopathic philosophy of aggravations as part of the curative reaction of the Vital Force.

Along with other nosodes, he introduced the remedy Baccillinum. A prodigious writer he published over twenty books in his lifetime…  John Henry Clarke, Robert Thomas Cooper and James Compton Burnett together formed the ‘Cooper Club’.

This regular meeting of leading British homeopaths was the source of many of the symptoms in John Henry Clarke’s Dictionary of Materia Medica. John Henry Clarke says of Burnett, “…during the last twenty years Burnett has been the most powerful, the most fruitful, and the most original force in homeopathy”…

Burnett was a prolific writer and he wrote numerous books and small pamphlets about diverse aspects of homeopathy, Natrum mur as a Test of the Doctrine of Drug Dynamization, Curability of Cataract by Medicines, Tumours of the Breast and their Cure, Fifty reasons for Being a Homeopath, Five Years Experience in the New Cure of Consumption by Its Own Virus, Curability of Tumours, Diseases of the Spleen and Their Remedies Clinically Illustrated, The Change of Life in Women and the Ills and Ailings Incident Thereto, On neuralgia, Diseases of the skin from the organismic standpoint, The Greater Diseases of the Liver, The Diseases of the Liver, On Fistula and Its Radical Cure by Medicines, Enlarged Tonsils Cured by Medicines, Vaccinosis and Its Cure by Thuja, Delicate, Backward, Puny, and Stunted Children, Gout and Its Cure, The Medicinal Treatment of Diseases of the Veins, Organ Diseases of Women, Gold as a Remedy in Disease, Ringworm: its constitutional nature and cure, Best of Burnett,

She was the first child of his second marriage; her mother, Katharine Rees, was a beautiful, delicate, imaginative, imperious and highly competitive woman who had met her future husband as his patient, and fallen passionately in love with him.

Their devotion was mutual and, when Dr Burnett’s first wife died in childbirth, he remarried so promptly that Ivy was born less than two years after her last half brother.

Her mother inherited five small stepchildren (one had already died in infancy), ranging in age from eight years old down to the new baby, and over the next fifteen years she bore seven more of her own.

The Burnett family moved to a large house on the south coast at Hove, Sussex, although Dr. Burnett spent the greater part of each week in town, immersed in the demands of a rapidly expanding London practice.

Katharine Rees (his second wife gave him 7 more children), was easily bored by domesticity,  found herself without outside contacts or adult company in a household full of increasing numbers of her own and her hated predecessor’s offspring.

She was unable to bear the loneliness and frustration of the solitude and the children, competing for attention and affection, had to submit to the steadily more tyrannical rule of an unchecked, unquestioned, unhappy and peremptory autocrat.

Ivy and her beloved younger brothers, Guy and Noel, played together and shared a governess, Ivy, learning Latin and Greek with her brothers’ tutor.  She was encouraged by the liberal and unorthodox Dr Burnett to prepare to read classics at London university (neither Oxford nor Cambridge gave degrees to women in those days).

She had dearly loved her father, who died without warning from a heart attack in 1901 when she was sixteen.  Her mother, hysterical and distraught, never fully recovered her mental or moral balance. She dressed the whole family in unrelieved black, retreating with them to a life of almost complete isolation from the outside world, venting her depression on her eldest daughter and depending for consolation on Guy, who had always been her favorite.

But Guy caught pneumonia and died as suddenly as his father in 1904, while Ivy was away in her final term at the university. She had felt, by her own account, as close as a twin to Guy and now turned in her despair to Noel, forming an inseparable pair with him in the three years before he went up to Cambridge.

The stepchildren had long since fled to London (to stay for twenty years with Julia Myra Hess, their piano tutor). Noel’s departure left Ivy shut up at home with her mother, condemned to teach her four younger sisters, without friends of her own or openings or any imaginable prospect of escape.

She had worn black throughout her youth and in the long years of mourning her father and Guy, and she wore it again in 1911 when Mrs. Compton Burnett died of cancer after a long and debilitating illness.

Under her mother’s will, Ivy inherited the post of head of household, establishing her own autocratic rule over her four sisters until they mutinied in 1915, and ran away to London together in defiance of her authority.

Noel had been for years Ivy’s ally, her sole source of intellectual stimulation and emotional support in a decade of bitter desolation since Guy died. But Noel joined the army as a Sub Lieutenant on the outbreak of war with Germany in August 1914, and was killed two years later in the battle of the Somme.

Ivy could never talk afterwards about the war, nor speak of her brother to the day of her death without tears welling up in her eyes. The closing phase of the war marked the lowest point for the surviving Compton Burnetts. Even Ivy, who had seemed rock like, inscrutable, inured to grief and shock, could not withstand the blow which destroyed the last remnants of the only life she had ever known.

No one had anticipated, or could ever afterwards explain, the deaths of her two youngest sisters who killed themselves, aged twenty two and eighteen, by swallowing veronal behind the locked door of their bedroom on Christmas Day 1917.

Ivy fell ill after the inquest, and very nearly died herself in the deadly flu epidemic that swept London the following summer. She emerged slowly and painfully over the next few years from a period of prolonged mental, physical and emotional prostration, a state she described at the time as death in life.

The publication of Pastors and Masters marked her recovery; a final distancing from the experiences of her first forty years which she never discussed in fact, but whose implications she would spend the next forty years and 19 novels exploring in fiction.

Her second novel, Brothers and Sisters, was of all her books the one that stuck most closely to her own past, examining the depredations of a jealous, demanding, extravagantly grief stricken widow directly based on Ivy’s mother.

It is an unreassuring, if not unsympathetic portrait  one of the things Ivy’s admirers found most disconcerting was her refusal to dismiss or condemn her fictional tyrants out of hand and it lays down for the first time a relationship with the past that would remain constant in all her subsequent novels.

Her Obituary, August 28, 1969, states, “Ivy-Compton Burnett had for long been regarded by some critics as one of the foremost figures in English fiction”. She was named a Dame Commander of the British Empire in 1967.

John Burnett was a member of the Committee of the English Homeopathic Association in 1849.