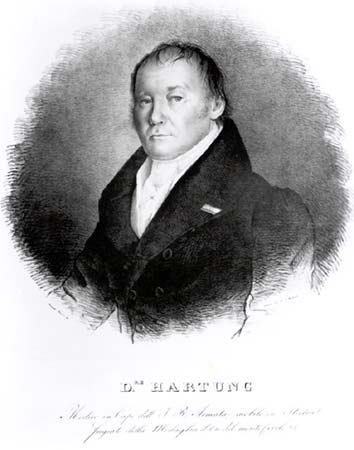 Christophe Hartung 1779 - 1853 was an Austrian orthodox physician who converted to homeopathy to become a student of Samuel Hahnemann.

Christophe Hartung is famous for the cure of a cancerous tumour in the eye of Johann Josef Wenzel Graf Radetzky von Radetz in 1841.

This cure caused a Europe wide sensation, and details of this cure were widely published around the World.

Radetz served under Karl Philipp Schwarzenberg who was himself a patient of Samuel Hahnemann.

Christophe Hartung was a colleague of Philip Wilhelm Ludwig Greisselich.

In January 1841, the celebrated Austrian Field Marshall Count Johann Josef Wenzel Graf Radetzky von Radetz was suffering from a tumour in the orbit of the right eye, which pushed the eyeball outwards and forwards.

The tumour had been growing since the previous October. The Emperor Ferdinand I, with whom the Field Marshall was a great favourite, sent his staff physician Dr. Jaeger, Professor of Ophthalmology in the Joseph’s Academy of Vienna, to Milan where the patient resided, to consult with Dr. Flarer, Professor of Ophthalmology in Pavia, and the Field Marshal’s ordinary medical attendant, Staff Surgeon Hartung, a homeopathic practitioner, to make a report upon the disease, and to advise as to the appropriate treatment.

The three consultants met on the 26th of January, and after careful examination, unanimously pronounced the disease to be of a fungous cancerous character. The two professors held it to be incurable by any means known to them; that a fatal termination was only a question of time; and as they held medicine to the powerless in such a case, they would offer no suggestion as to treatment.

Dr. Hartung, while agreeing with the learned professor as to the hopelessness of a cure under ordinary treatment, thought that benefit might be derived from homeopathic remedies. The patient declared that he would have no other than homeopathic treatment.

Under Dr. Hartung’s homeopathic remedies, this formidable disease in this septuagenarian patient steadily declined. By the 19th of March the disease was perfectly cured, and no difference was observable in the two years after this, and was sufficiently active in mind and body to win the decisive Battle of Novara in 1849.

Count Johann Josef Wenzel Graf Radetzky von Radetz fell ill with a malignant tumour of the right orbita. After the count was examined by two renowned professors of ophthalmology by order of the Habsburg Emperor, and after the case was considered to be hopeless, he turned to the field captain in the medical corps Hartung, stationed in Milan, who described the tumour in the following way:

A hard, grey bluish growth of fungoid nature within the whole eye socket, which presses the eye out (exophthalmus). The eyeball is pushed to the outer canthus and is immovable. In the eyeball there are stitching, tearing, burning pains and itching. Blindness of the affected side.

Eyelids swollen, black, blue and immovable. Conjunctiva and carnuncula lacrimalis are dirty-red and covered by a web of varicose vessels.

Hartung starts the treatment with Arsenicum 30C: The growth increases further. Already after four days he gives Psoriunum 30C: Pressure in eye, headache, bleeding. After further three days Herpetin 30C is tried: Headache, easy bleeding. The tumour keeps growing under all these remedies. On the 13th day of treatment Carbo animalis 30C: No bleeding anymore; the tumour growth comes to a still stand; the sponge like tumour excretes a cream like liquid; itching in the inner canthus.

On the 19th day of treatment one dose of Thuja 30C, after three additional local applications of Thuja. The milky discharge increases, but less pain and clear reduction of tumour. In the further course of treatment prescription of Carbo animalis 30C for two days. Then again Thuja internally and externally, every eight days in alternation with Carbo animalis internally and externally.

Six weeks after the start of treatment the malignant fungoid tumour has totally disappeared, and the normal mobility and vision of the eye is restored. Count Johann Josef Wenzel Graf Radetzky von Radetz died 17 years after the treatment at the age of 92. Christoph Hartung. Dokumenta Homoeopathica 1986, vol. 7:23-33 (The case was started with aconite).

Mention is made of Dr, Hartung  being located in Salzburg, in Austria, in 1833. He was one of the provers for the Materia Medica Pura. His name appears in the Zeitung list of 1832 at which time he was a regimental physician at Salzburg.

His chief cure, and one by which he is to be remembered is the cure of Johann Josef Wenzel Graf Radetzky von Radetz of a malignant tumor of the eye, which had been pronounced incurable by the allopathic surgeons. This was in 1840.

In 1856 this cure having been called into question by an allopathic journal, Johann Josef Wenzel Graf Radetzky von Radetz over his own signature said: “Having learned that there are malicious doubts in circulation as to the efficacy of Homeopathy, I hereby declare that the disease of my eye in 1841, was cured exclusively by the homeopathic treatment of my staff physician, Dr. Hartung, now deceased. Johann Josef Wenzel Graf Radetzky von Radetz Verona, Dec. 13, 1856.”

In 1841, Dr. Hartung published in the Zeitung an account of this care, and a translation may be found in the British Journal of Homeopathy vol. I, p. 147.

After the cure of Johann Josef Wenzel Graf Radetzky von Radetz, Hartung was so annoyed by the jealousies of the allopathic school that he quitted Milan and established himself at Parma (where Charles II Duke of Parma (then Duke of Lucca), provided a refuge for homeopathy), leaving his practice in the hands of his colleague Johann Taubes Ritter von Lebenswarth, a regimental physician.

Christophe Hartung, from a centuries old family from Roemhild or Westenfeld, In 1798 he joined the military medical service in the Austrian army in Vienna, he studied from 1798 to 1800 and from 1810 to 1812 at public expense at the Imperial Josephine medical surgical Military Academy Josephinum.

The Josephinum’s proposed appointment to the chair of anatomy, he refused and instead joined in the field of military medical careers. In 1813, he was working for Emperor Franz I of Austria. From 1819 to 1826 he worked as a student of Samuel Hahnemann with the study of homeopathy …

Following his official positions he brought homeopathy to Salzburg, Venice and in Lombardy. In 1837 he was appointed Imperial Royal Council and senior military doctor in the provinces of Lombardy and Veneto appointed to the supervision of doctors and all hospitals in the region had.

In 1839 Hartung was a member and Speaker of the great Assembly of the Central Association of German homeopathic physicians in Leipzig. In 1841 followed by the Europe wide sensational homeopathic healing of Field Marshal Johann Josef Wenzel Graf Radetzky von Radetz by Hartung.

For the proven merits of homeopathy, Samuel Hahnemann sent from Paris to Christoph Hartung his portrait bust made of bronze and his Carneol ring with Samuel Hahnemann’s portrait. The representative of the Lombardy donated Hartungsche portrait medals in gold, silver and bronze.

Hartung spoke half a dozen languages, and became the founder of a family of Physicians, in the following centuries and until today, in unbroken succession of seven generations of numerous well known physicians sprang from his line. The family was ennobled.

Christophe Hartung’s death is recorded in The British Journal of Homeopathy in 1854.