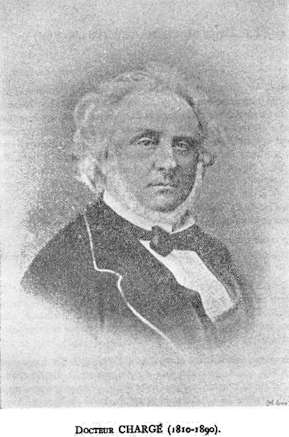 Alexandre Charge 1810 - 1890 (photo used courtesy  of Homéopathe International) was an orthodox physician who converted to homeopathy to become one of the first French homeopaths.

Alexandre Charge was the homeopath of Napoleon III, and Marshal St. Arnaud.

In 1858 Alexandre Charge, Audouit, A Cretin, Antoine Hippolyte Desterne, Escallier, Gastier, Gueyrard, Leboucher, Love, L Molin, Antoine Henri Petroz, and Leon Francois Adolphe Simon, successfully prosected the authors of an article in the Union Medicale for misrepresenting homeopathy by attacking it with false allegations and by ‘drawing conclusions contrary to the truth’.

In 1849, Alexandre Charge went to the South of Frace to treat a major cholera epidemic, and for the exceptional care he provided at this time, Napoleon III bestowed the Legion of Honour upon him.

Alexandre Charge was one of the earlier French  Homeopathists.

Pierre Augustus Rapou says of him: ”He was one of the best known Homeopaths in France. He wrote a book on our method, and was held in great esteem in Marseille. He was president and secretary of the Homeopathic Society.

“Dr. Charge published a book in 1838, of Medical Studies, or Answer to the Accusations Against the Homeopathic Doctrine. He also published a pamphlet on the Cholera in Marseille, in 1854. One on the treatment of the cholera, and also a history of that epidemic.

Armand Jacques Leroy de Saint Arnaud 1801 - 1854 was a French soldier and Marshal of France during the 19th century. He served as French Minister of War until the Crimean War when he became Commander in Chief of the army of the East.