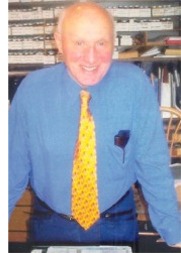 Jack Temple 1917 - 2004 was a healer and a homeopath who was famous for treating Diana Princess of Wales, Sarah Duchess of York, Cherie Blair, and Jerry Hall.

Jack Temple was a pioneering dowser healer who developed a successful practice in Surrey. He became so successful that there was normally at least a four month waiting list.

He achieved worldwide recognition of his work and was notably publicly thanked for the help he had given to them by Diana Princess of Wales, Sarah Duchess of York and Jerry Hall.

Jack Temple was in his younger years an organic gardener. He became a dowser healer at the age of 50 because he intuitively knew that this was the only way to heal his wife who was very ill and who could not obtain relief from conventional medicine.

When Jack developed his dowsing skills he was able to identify within many healing modalities what could help him.

The homeopathic tradition taught him to use potentised substances and to treat like with like; acupuncture taught him the energetic value of the meridians. He was self taught and his technique was unique and very efficient. As a dowser healer he understood that it was essential to have a firm knowledge of anatomy, physiology and pathophysiology.

In his opinion, being healthy starts with growing healthy crops and foods. He understood that ailments were very often due to poor nutrition. He once said “don’t think in terms of disease – how you can fight it. Think in terms of the missing nutrient which is creating disease, replace those nutrients and the disease disappears.”

Through his healings, he also came to the conclusion that toxins and traumas in the body also create blockages that may stop the flow of specific nutrients and then lead to ill health. As an organic gardener, he also dowsed the damage done by the chemicals used in modern farming.

He was vehemently against the use of vaccines, especially on children and he would dowse that many of his client’s health problems would stem from such vaccinations. He was very focused on the damage done by toxic substances used to carry the vaccine around the body and get it across the body’s natural defences (e.g. Aluminium Sulphate and Mercuric Oxide).

Guided by his pendulum, Jack would travel the world to locate the necessary remedies to improve his patients’ health. He would collect them from nature around him. He used plants and minerals, and established that the energy of the place in which they are found is critically important for their healing energy.

His affinity with nature and his observations led him to dowse the essential essence needed to put a patient’s problem into relief or remission (he did not use the word “cure”). For every health problem he encountered, he tasked himself to find a natural remedy of the required vibrational frequency to remove the problem.

In later years, his search for healing vibrational energy led him to fossils, numerology, the power of prime numbers, Hebrew text from the Old Testament, Stone Circles, Labyrinths, Vesica Pisces and Sacred Geometry among many other things.

For example, he dowsed that the first words of Hebrew text in the Bible have a strong vibrational energy and if placed under food, it enhances the nutritional energy of that food…

His work developed into a review of all aspects of the mind, body and spirit as they impact upon health.

The theory behind his technique was that the stronger positive vibrational force of the remedy would magnetically attract through the skin the weaker negative vibration in the problem area. He referred to this process as a type of osmosis. Therefore, to heal someone, he would make potentised drops or tablets from a specific formula that he would stick on the weak or diseased area of the body.

Jack documented much of his work… He has left a tremendous legacy and over 2,500 healing remedies.

He was proud of how his treatments on himself kept him young and energetic. He often jokingly commented on how his hair had started to grow again when he was 80 years old!

Sarah Duchess of York: “I am now stronger than I was thanks to Jack. I am 100% behind him and his work. I recommend him to many people, but there are those who are cynical or afraid to try his methods of treatment.”

Jerry Hall (model and ex wife of Mick Jagger): “Going to Jack Temple was a life enhancing experience. He cured my sister, my mother, my children and me of all of our ailments. He is a genius worker.”

Jack Temple died in 2004 at the age of 87 as a result of complications following a road accident.

The fourth of six sons of a Polish Jewish refugee, Jack Temple was born Jack Templiski in the East End of London. He claimed he had lived 120 previous lives and could trace his origins back 97,000 years.

A sickly child, he suffered from rickets and recurrent digestive problems, which he would later attribute to a “blockage” inherited from a wound sustained by his father, who had been shot in the leg during the Japanese invasion of Manchuria in 1905.

When World War II broke out, Temple was deemed unfit for military service. Instead he became a farm labourer in Surrey. This led him to take an interest in agriculture, diet and nutrition, and, with his wife Blanche, he set himself up as an organic market gardener. He followed the Hay diet as part of a cure for his recurrent health problems, and claimed to have lived for a whole year on swedes, nettles and cheese.

In the early 1970s he exhibited his organic catalogue at a mind and body festival in London, where he met someone who practised dowsing using a pendulum. He decided to have a go himself and found he had the gift.

His first patient was his wife, who had lost the use of her limbs after being struck by lightning in a field near Bath. He dowsed and treated her with plant based remedies to “pull out” the lightning and she recovered.

Eventually he went into practice as an alternative therapist, opening his clinic, the Temple Healing Centre, in a prefabricated hut at Pyrford, near West Byfleet. By the 1990s, he was seeing about 50 patients a week, although regular visits were not a necessity.

Patients were asked to hand over a lock of hair and fingernail clippings, which Temple kept on his shelves in jars of alcohol preservative. By swinging his pendulum over the relevant jar, Temple was able to connect to the individual’s electromagnetic fields to tell if they were healthy or ill without seeing them.

Away from the clinic, Temple used his dowsing pendulum to help him choose foods when visiting his local supermarket.

Among his many other achievements, Temple claimed to have “seen the bald pates of middle aged and elderly men begin to spring hair again”.

He also discovered the cause of an inherited weakness in his family in toxins that had entered the family system through a black clothing dye commonly used in the 19th century. He devised a remedy consisting of “the distilled essence of 21 flowers dowsed for on the Isle of Skye”

He married, in 1940, Blanche Vyze, who survives him with their son and two daughters.