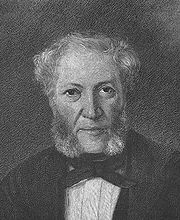 (Isaac) Ignaz Moscheles 1794 – 1870 was a Bohemian composer and piano virtuoso, whose career after his early years was based initially in London, and later at Leipzig, where he succeeded his friend and sometime pupil Felix Mendelssohn as head of the Conservatoire.

Homeopath Raphael Roche was the grandson of Ignaz Moscheles.

Much of what we know about Moscheles’s life is derived from the edition of his diaries prepared by his wife, Charlotte, after his death, and published in 1874. This edition also gives lively portraits of his era and of his musical contemporaries. Unfortunately however the diaries themselves have since gone missing, although they may perhaps rematerialise.

Moscheles was born in Prague to a well off Jewish merchant family. His first name was originally Isaac. His father played the guitar and was keen for one of his children to become a musician. Initially his hopes fixed on Ignaz’s sister, but when she demurred her piano lessons were transferred to her brother.

Ignaz early developed a passion for the (then revolutionary) piano music of Ludwig von Beethoven, which the Mozartean Bed?ich Diviš Weber, his teacher at the Prague Conservatory, attempted to curb, urging him to concentrate on Bach, Mozart and Muzio Clementi. Nevertheless his abilities were such that he was able to study in Vienna under Albrechtsberger for counterpoint and theory and Salieri for composition.

At this time he changed his first name from ‘Isaac’ to ‘Ignaz’. He was one of the leading virtuosi resident in Vienna during the 1814-1815 Congress of Vienna and it was at this time that he wrote his enormously popular virtuosic Alexander Variations Op. 32, for piano and orchestra, which he later played throughout Europe.

Here too he became a close friend of Giacomo Meyerbeer (at that time still a piano virtuoso, not yet a composer) and their extemporized piano duets were highly acclaimed.

Whilst in Vienna Moscheles was able to meet his idol Ludwig von Beethoven, who was so impressed with the young man’s abilities that he entrusted him with the preparation of the piano score of his opera Fidelio, commissioned by his publisher Artaria. At the end of his manuscript, before presenting it to Ludwig von Beethoven, Moscheles wrote the words Fine mit gottes Hülfe (Finished with God’s help).

He married in the Frankfurt synagogue in 1825 Charlotte Emden, daughter of a Jewish banker and a cousin of Heinrich Heine. Nonetheless, after he settled in England he clearly found it convenient to be, technically at least, a member of the Church. His children were all baptised at birth and he and his wife were baptised in 1832.

Moscheles never disavowed his Jewish origins and frequently took his family to visit his relatives in Prague, all of whom had retained their Jewish allegiances.

After his Viennese period there followed for Moscheles a sensational series of European concert tours - it was after hearing Moscheles play at Carlsbad that the boy Robert Alexander Schumann was fired to become a piano virtuoso himself.

But Moscheles found an especially warm welcome in London, where in 1822 he was awarded an honorary membership of the London Academy of Music (later to become the Royal Academy). At the end of the year he wrote in his diary ‘I feel more and more at home in England’ , and he had no hesitation in settling there after his marriage.

Before that however in 1824 he had accepted an invitation to visit Abraham Mendelssohn Bartholdy in Berlin to give some lessons to his children Felix Mendelssohn and Fanny Mendelssohn.

His comments on meeting them were:

A couple of weeks later, he wrote:

This afternoon… I gave Felix Mendelssohn__ his first lesson, without losing sight for a moment of the fact that I was sitting next to a master, not a pupil.

Moscheles had carefully prepared for it. In London, apart from becoming a regular successful performer and a musical adviser for the soirées of the Rothschilds, he had become an invaluable aid for George Smart and the Royal Philharmonic Society, advising them of the talents of European musicians he encountered on his own concert tours.

When George Smart himself toured Europe in 1825 looking for new music and musicians for the Society, Moscheles furnished George Smart with a list of contacts and letters of introduction, including both Ludwig von Beethoven and Felix Mendelssohn.

Felix Mendelssohn’s great success in England from 1829 until the end of his life also reflected well on his friend. Although Moscheles’s music was now being looked on as a little old fashioned, he was heavily in demand as a music teacher and included amongst his pupils many children of the rich and aristocratic classes.

He was also appointed Pianist to Prince Albert, a sinecure which nevertheless confirmed his status.

He was an early exponent of the piano recital - the concert of music for piano alone, the innovation of which is disputed between Franz Liszt and Moscheles.

Moscheles notably reintroduced the harpsichord as a solo recital instrument. He also often performed in concert with Felix Mendelssohn in London (and elsewhere) - one great favourite of both musicians were Bach’s concerti for multiple keyboard instruments.

On these occasions Felix Mendelssohn and Moscheles were renowned for vying with each other in impromptu cadenzas. Performances of the three harpsichord concerto were given, on one occasion with Thalberg at the third keyboard, on another with Clara Schumann. Moscheles often appeared as a conductor, especially of Ludwig von Beethoven.

Although throughout this period Moscheles continued to write music and travel on concert tours, he depended heavily on teaching for income, and this placed him under considerable stress.

The Conservatory became in effect a shrine to Felix Mendelssohn’s musical legacy.

The critic and pianist Edward Dannreuther, who studied under Moscheles at Leipzig between 1859 and 1863, later wrote:

[…] it was whispered that the two old Grands in the pianoforte room of the Conservatorium were wont to rehearse Felix Mendelssohn__’s D minor Concerto all alone by themselves, from 12.30 on Sunday night until cock crow! Force of habit, probably.

It thus fell to Moscheles to lead the counter attack on Wilhelm Richard Wagner after the latter’s snide attack on Felix Mendelssohn (and Giacomo Meyerbeer) in his notorious article Das Judenthum in der Musik (“Jewry in Music”), which he did by requesting the resignation from the conservatory’s board of Wilhelm Richard Wagner’s editor, Brendel.

Like Felix Mendelssohn, Moscheles believed that music had reached its Golden Age during the period Bach to Ludwig von Beethoven, and was suspicious of (although not necessarily antagonistic towards) new directions such as those shown by Wilhelm Richard Wagner, Franz Liszt and Louis Hector Berlioz. Nevertheless his personal relations with all of these (except perhaps Wilhelm Richard Wagner) remained cordial.

The Felix Mendelssohn legacy in Britain meant that the Leipzig Conservatory had a high reputation amongst English musicians and amongst those who studied there during Moscheles’s time were Arthur Sullivan and Charles Villiers Stanford.

Moscheles died in Leipzig on 10th March 1870, nine days after attending his last rehearsal with the Leipzig Gewandhaus Orchestra.

*Felix Moscheles was a friend of Giuseppe Mazzini.