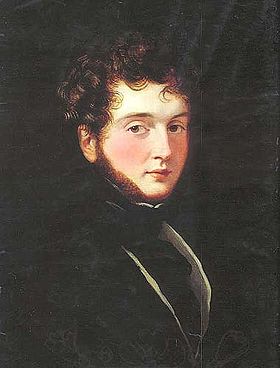 d’Orsay was born in Paris, the second son of Albert Gaspard Grimaud, a Bonapartist general. His mother was Eleanore de Franquemont, an illegitimate daughter of the Duke of Wurttemberg and the Italian adventuress Anne Franchi, and his elder brother died in infancy.

In 1821 he entered the French army of the restored Bourbon monarchy (against his own Bonapartist tendencies), attending the lavish coronation of George IV of the United Kingdom in London that year (staying until 1822) and serving as a Garde du Corps of Louis XVIII.

In 1822, while stationed at Valence on the Rhone, he formed an acquaintance with Charles Gardiner the Earl of Blessington and the Countess of Blessington, which quickly ripened into intimacy, and at the invitation of the Earl he accompanied the party on their tour through Italy.

In the spring of 1823 he met Lord Byron at Genoa, and the published correspondence of the poet at this period contains numerous references to d’Orsay’s gifts and accomplishments, and to his peculiar relationship to the Blessington family.

A diary which d’Orsay had kept during his visit to London in 1821–1822 was submitted to Lord Byron’s inspection, and was much praised by him for the knowledge of men and manners and the keen faculty of observation it displayed.

On December 1, 1827, Count d’Orsay married Harriet Gardiner, a girl of fifteen, the daughter of Lord Blessington by his previous wife. The union, if it rendered his connection with the Blessington family less ostensibly equivocal than before, was in other respects an unhappy one, and a legal separation took place in 1838, at which Harriet Gardiner paid over £100,000 to his creditors (though even this did not cover all his debts) in exchange for d’Orsay giving up all claims to the Blessington estate.

After the death of Lord Blessington, which occurred in 1829, the widowed Countess of Blessington returned to England, accompanied by d’Orsay, and her home, first at Seamore Place, then at Gore House, soon became a resort of the fashionable literary and artistic society of London, which found an equal attraction in host and in hostess.

The Count’s charming manner, brilliant wit, and artistic faculty were accompanied by benevolent moral qualities, which endeared him to all his associates. His skill as a painter and sculptor was shown in numerous portraits and statuettes representing his friends, which were marked by great vigour and truthfulness, if wanting in the finish that can only be reached by persistent discipline.

D’Orsay declined, on the grounds of being a foreigner, and Benjamin Disraeli went with Henry Baillie, a mutual friend. The character of Count Alcibiades de Mirabel in Benjamin Disraeli’s novel Henrietta Temple was modeled on d’Orsay, to whom the book was dedicated.

Count d’Orsay had been from his youth a zealous Bonapartist, and one of the most frequent guests at Gore House was Louis Napoleon. In 1849 the Count went bankrupt, and the establishment at Gore House being broken up, he went to Paris.

The Countess of Blessington sold almost all her possessions and followed him there, but died a few weeks after her arrival, leaving him heartbroken.

He endeavoured to provide for himself by painting portraits. He was deep in the counsels of the Prince President (who had also returned to Paris from exile, and been elected President the year before d’Orsay arrived), but relations between them were less cordial after Louis Napoleon’s 1851 coup d’état (in which he became Napoleon III), of which the Count had expressed his strong disapproval.

Reluctant to entrust d’Orsay with any affairs of state, Napoleon III finally offered him the position of Director of the Beaux Arts. Within a few months of the appointment, however, D’Orsay contracted a spinal infection, of which he died on 4 August 1852 in the house of his sister Ida, duchesse de Gramont, at Chambourcy, just a few days after his appointment had been officially announced.

He had designed a pyramidal grey stone tomb for the Countess of Blessington at Chambourcy, and he too was buried in it, with Napoleon III among the mourners at the funeral.