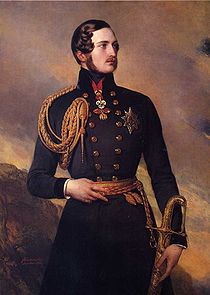 Prince Albert of Saxe Coburg and Gotha (Francis Albert Augustus Charles Emmanuel, later HRH The Prince Consort) 1819 – 1861 was the husband of Queen Victoria of the United Kingdom of Great Britain and Ireland.

Prince Albert was the nephew of Leopold I Belgium, and his aunt was Queen Adelaide, and his sister in law was Sophie Grand Duchess of Baden.

Prince Albert was the President of the Society for Improving the Condition of the Labouring Classes and the Society for the Extinction of Slavery, and he was a friend of Robert Peel. Robert Liston, a close friend of Frederick Hervey Foster Quin, was his Surgeon in Ordinary,

Albert was born in Schloss Rosenau, near Coburg, Germany, and was the second son of Ernest III, Duke of Saxe Coburg Saalfeld and his first wife, Louise of Saxe Gotha Altenburg.

Albert’s future wife, Queen Victoria, was born in the same year with the assistance of the same midwife.