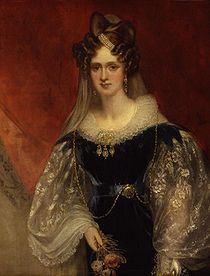 Princess Adelaide of Saxe Meiningen (Adelaide Louise Theresa Caroline Amelia; later Queen Adelaide) 1792 – 1849 was the queen consort of William IV, the last king of the House of Hanover in Britain.

Adelaide was the aunt of Prince Albert.

The Queen Dowager was a patient of John Ernst Stapf. John Ernst Stapf attended the Queen Dowager in Nuremberg and saved her life after her allopathic physicians had given up on her. This incredible cure ‘opened up the mansions of the aristocracy’ across Europe to homeopathy (_Southwestern Homeopathic Journal and Review, Volumes 2-3.** _1848. Page 118 onwards. See Also _Letter to the Hon.------- with reasons for examining and believing the fundamental principles of homoeopathy.** _Caleb B. Ticknor. Henry Ludwig, 1840. Page 14 onwards).

However, John Ernst Stapf could not travel to England to become her permanent homeopath, so Harris F Dunsford was called upon to attend her there.

Adelaide was born on 13 August 1792 at Meiningen, Thuringia, Germany. Her father was George I, Duke of Saxe-Meiningen. Her mother was Luise Eleonore, the daughter of Prince Christian of Hohenlohe Langenburg. She was styled Her Serene Highness Princess Adelaide of Saxe Meiningen, Duchess in Saxony from her birth until the Congress of Vienna, when the entire House of Wettin was raised to the style of Highness.