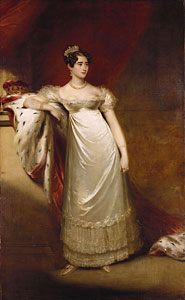 Princess and Landgravine Augusta of Hesse Cassel 1797 – 1889 was the consort of Prince Adolphus, Duke of Cambridge, the tenth born child, and seventh son, of George III and Charlotte of Mecklenburg-Strelitz. The longest lived daughter in law of George III, she was the maternal grandmother of Mary of Teck, queen consort to George V.

The Duchess of Cambridge was a Patron (http://homeoint.org/morrell/articles/rlhh.htm The London Homeopathic Hospital,The Illustrated London News, April 1858 by Peter Morrell) of the London Homeopathic Hospital, and a friend and patient (Peter Morrell, British homeopathy during two centuries. (Staffordshire University, 1999) of Frederick Hervey Foster Quin.

Augusta was the mother of Mary Adelaide of Cambridge Duchess of Teck,

Her Highness Princess and Landgravine Augusta of Hesse Cassel, third daughter of Prince Frederick of Hesse, and his wife, Princess Caroline Polyxene of Nassau Usingen, was born at Rumpenheim Castle, Kassel, Hesse.

Through her father, she was a great granddaughter of George II of Great Britain. Her father’s older brother was the Landgrave of Hesse Kassel. In 1803, her uncle’s title was raised to Elector of Hesse - whereby the entire Kassel branch of the Hesse dynasty gained an upward notch in hierarchy.

On 7 May, in Kassel, and then, again, on 1 June 1818 at Buckingham Palace, Princess Augusta married her second cousin, the Duke of Cambridge, when she was 21 and he 43. Upon their marriage, Augusta gained the style HRH The Duchess of Cambridge. The Duke and Duchess of Cambridge had three children.

From 1818 until the accession of Queen Victoria, and the separation of the British and Hanoverian crowns in 1837, the Duchess of Cambridge lived in Hanover, where the Duke served as viceroy on behalf of his brothers, George IV and William IV. 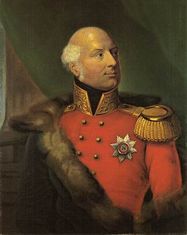 Prince Adolphus, Duke of Cambridge (Adolphus Frederick) 1774 – 1850 was the tenth child and seventh son of George III and Queen Charlotte. He held the title of Duke of Cambridge from 1801 until his death. He also served as Viceroy of Hanover on behalf of his brothers George IV and William IV. His granddaughter, Mary of Teck was the Queen consort of George V.

Prince Adolphus was born at Buckingham Palace. He was tutored at home before being sent to the University of Göttingen in Germany in summer 1786, along with his brothers Prince Ernest (created Duke of Cumberland in 1799) and Prince Augustus (created Duke of Sussex in 1801).

In 1791, he and Prince Ernest went to Hanover to receive military training under the supervision of the Hannoverian commander Field Marshal von Freytag. He rose to the ranks of colonel in 1794, to lieutenant general in 1798.

In 1803 he was appointed as Commander in Chief of the new founded King’s German Legion and in 1813 he became field marshal. George III appointed Prince Adolphus a Knight of the Garter on 6 June 1786 and created him Duke of Cambridge, Earl of Tipperary, and Baron Culloden on 17 November 1801.

After the death of Princess Charlotte in 1817, the Duke was set the task of finding a bride for his eldest unmarried brother, the Duke of Clarence (later William IV) in the hope of securing heirs to the throne, Charlotte had been the only legitimate grandchild of George III, despite the fact that the King had twelve surviving children.

The Duke of Cambridge was married first at Kassel, Hesse on 7 May and then at Buckingham Palace on 1 June 1818 to his second cousin Augusta, the third daughter of Prince Frederick of Hesse.

He was, as is shown in the list of issue below, the maternal grandfather of Mary of Teck, consort of George V. This makes Adolphus the great great grandfather of the present British monarch, Elizabeth II.

From 1816 to 1837, the Duke of Cambridge served as viceroy of Hanover on behalf of his elder brothers, George IV and later William IV.

When his niece, Queen Victoria succeeded to the British throne on 20 June 1837, the 123 year union of the crowns of Great Britain (the United Kingdom of Great Britain and Ireland from 1801) and Hanover ended.

The Duke of Cumberland became Ernest Augustus I and the Duke of Cambridge returned to Britain.

The Duke of Cambridge died on 8 July 1850 at Cambridge House, Piccadilly, London, and was buried at Kew. His remains were later removed to St. George’s Chapel, Windsor. His only son, Prince George, succeeded to his peerages.

The Grand Duchess ran a stall at the Bazaar held on 11th and 12th June 1855 at the Riding School of the Cavalry Barracks in Knightsbridge in aid of the London Homeopathic Hospital,