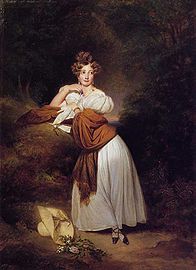 Sophie was born in Stockholm, Sweden, on 21 May 1801. She was the daughter of King Gustav IV Adolf of Sweden and Queen consort Frederica of Baden.

Sophie was eight years old (1809) when her father was deposed and she was forced to leave Sweden with her parents and siblings.

Between the time of the coup, which deposed her father, and until the royal family left Sweden, she was placed under house arrest with her mother. During this period, she was described in the famous diary of Hedwig Elizabeth Charlotte of Holstein Gottorp as a stubborn girl who was much more haughty and possessed less self contol than her brother.

An anecdote describes the contrast between the siblings. When Fredrika and her children were given permission to join the deposed king, famous Swedish nobleman Axel von Fersen came to discuss the arrangements. When he was about to leave, Sophie’s older brother Gustav ran to the door to open it for Fersen. The former queen Fredrika is quoted as saying, Sophie would never in the world have done thusly, she thinks of herself too highly for that.

On 25 July 1819 in Karlsruhe, Sophie married her half grand uncle Prince Leopold of Baden, the son of a morganatic marriage. The marriage with Leopold had been specifically arranged by her uncle, Grand Duke Karl I of Baden, to improve the chances that Leopold would one day succeed him as Grand Duke because of Sophie’s undoubted royal lineage. In 1830, her husband ascended to the grand ducal throne as Leopold I, and Sophie became the new Grand Duchess of Baden.

During the tumult caused by the appearance of Kaspar Hauser, Sophie was rumoured to have ordered Kaspar Hauser’s assassination in

On 25 July 1819 in Karlsruhe, Sophie married her half grand uncle Leopoldo I of Baden. They became the paternal grandparents of the Swedish Queen consort Victoria of Baden.

Sophia and Leopold I had the following children: