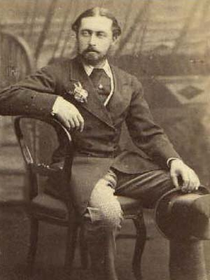 He was created Duke of Edinburgh, Earl of Kent and Earl of Ulster in the peerage of the United Kingdom on 24 May 1866. He succeeded his paternal uncle Ernst as the reigning Duke of Saxe Coburg and Gotha in the German Empire on 23 August 1893.

Alfred Duke of Edinburgh was a patient of Frederick Hervey Foster Quin, and was ’much attached’ to him.

The Duke of Edinburgh contributed to the fund for Mary Seacole.

We have as yet said nothing of Dr. Quin’s  private practice. From the first it was most extensive, while his patients went almost exclusively drawn from the very highest class of society.

From Arlington Street he moved to Mount Street, where his health began to fail, and compelled him to retire to a considerable extent ; so that from the time he left Mount Street he never laid himself out for practice, albeit he continued to see those patients who would consult no one but himself, seeing such an one but a few days before his last illness.

On leaving Mount Street, Granville Leveson Gower 1st Earl Granville, who entertained the warmest friendship and admiration for Frederick Hervey Foster Quin, invited him to live at his lordship’s house in Brunton Street; after residing there a short time, and during a very severe illness, he removed to Belgrave Mansions; here he remained till his lease expired. While looking for other quarters, Alfred Duke of Edinburgh, then abroad, wrote to him, begging him to occupy apartments at Clarence House.

George Granville William Sutherland Leveson Gower 3rd Duke of Sutherland made a similar offer of Stafford House for his use; he accepted the gracious offer of Alfred Duke of Edinburgh, and resided at Clarence House till the Duke and Duchess returned to town, when, although pressed to remain, he took a suit of rooms in Queen Anne’s Mansions, where he died at the advanced age of seventy nine.

Alfred was born at Windsor Castle. His mother was the reigning British monarch, Queen Victoria, the only daughter of Prince Edward Augustus, Duke of Kent and Princess Victoria of Saxe Coburg Saalfeld. His father was Prince Albert, the second son of Ernst I, Duke of Saxe Coburg and Gotha. As a son of the monarch, he was styled His Royal Highness The Prince Alfred at birth, and was second in the line of succession behind his elder brother, The Prince of Wales. He was known to his family as “Affie”, because he was so affable.

Alfred was christened by The Archbishop of Canterbury, William Howley, at the Private Chapel in Windsor Castle on 6 September 1844. His godparents were his maternal great uncle, The Duke of Cambridge (represented by his son, Prince George of Cambridge); his paternal aunt, The Duchess of Saxe Coburg and Gotha (represented by his maternal grandmother, The Duchess of Kent); and Queen Victoria’s half brother, The Prince of Leiningen (represented by Arthur Wellesley 1st Duke of Wellington).

In 1856 it was decided that Prince Alfred, in accordance with his own wishes, should enter the Royal Navy. A separate establishment was accordingly assigned to him, with Lieutenant Sowell, as governor. He passed the examination for midshipman in August 1858, and was appointed to the HMS Euryalus.

In July 1860, while on this ship, he paid an official visit to the Cape, and made a very favourable impression both on the colonials and on the native chiefs. On the abdication of King Otto of Greece, in 1862, Prince Alfred was chosen to succeed him, but the British government blocked plans for him to ascend the Greek throne.

Prince Alfred, therefore, remained in the navy, and was promoted lieutenant on 24 February 1863, serving under Count Gleichen on HMS Racoon, and captain on 23 February 1866, being then appointed to the command of the frigate HMS Galatea.

In 1868, Alfred survived an assassination attempt while picnicking on the beach in the Sydney suburb of Clontarf while in New South Wales…

In the Queen’s Birthday Honours on 24 May 1866, the prince was created Duke of Edinburgh and Earl of Ulster and Kent, with an annuity of £15,000 granted by Parliament. He took his seat in the House of Lords on 8 June.

While still in command of the Galatea, the Duke of Edinburgh started from Plymouth on 24 January 1867 for his voyage round the world. On 7 June 1867, he left Gibraltar and reached the Cape on 24 July and paid a royal visit to Cape Town on 24 August 1867 after landing at Simonstown a while earlier. He landed at Glenelg, South Australia, on 31 October.

Being the first English prince to visit Australia, the Duke was received with great enthusiasm. During his stay of nearly five months he visited Adelaide, Melbourne, Sydney, Brisbane and Tasmania.

On 12 March 1868, on his second visit to Sydney while picnicking in the beachfront suburb of Clontarf, he was wounded in the back by a revolver fired by Henry James O’Farrell. The Prince was shot just to the right of his spine, and was tended for the next two weeks by six Florence Nightingale trained nurses led by Matron Lucy Osburn who were newly arrived in Australia (February 1868).

On the evening of 23 March 1868, the most influential people of Sydney voted for a memorial building to be erected, “to raise a permanent and substantial monument in testimony of the heartfelt gratitude of the community at the recovery of HRH”. This led to a public subscription which paid for the Royal Prince Alfred Hospital’s construction.

Prince Alfred soon recovered from his injury and was able to resume command of his ship and return home in early April 1868.

Henry James O’Farrell was arrested at the scene, quickly tried, convicted and hanged on 21 April 1868.

Prince Alfred reached Spithead on 26 June 1868, after an absence of seventeen months. He was also the first member of the Royal Family to visit New Zealand, arriving in 1869 on HMS Galatea.

The Duke’s next voyage was to India, where he arrived in December

The Duke of Edinburgh devoted himself to his profession, showing complete mastery of his duties and unusual skill in naval tactics. He was stationed in Malta for several years and his third child, Victoria Melita, was born there in 1876. He was promoted Rear Admiral on 30 December 1878; Vice Admiral, 10 November 1882; Admiral, 18 October 1887; and received his baton as Admiral of the Fleet, 3 June 1893.

He commanded the Channel fleet, 1883-1884; the Mediterranean fleet, 1886-1889; and was Commander in Chief at Devonport, Plymouth, 1890-1893. He always paid the greatest attention to his official duties and was most efficient as an Admiral.

Percy Scott wrote in his memoirs that “as a Commander in Chief, the Duke of Edinburgh had, in my humble opinion, no equal. He handled a fleet magnificently, and introduced many improvement in signals and manoeuvring.” He “took a great interest in gunnery.” “The prettiest ship I have ever seen was the [The Duke of Edinburgh’s flagship] Alexandra. I was informed that £2,000 had been spent by the officers on her decoration.”

On the death of his uncle, Ernst II, Duke of Saxe Coburg and Gotha on 22 August 1893, the vacant duchy fell to the Duke of Edinburgh, since the Prince of Wales had renounced his right to the succession. At first regarded with some coldness as a “foreigner,” he gradually gained popularity. By the time of his death in 1900, he had generally won the good opinion of his subjects.

The Duke was exceedingly fond of music and an excellent violinist, and took a prominent part in establishing the Royal College of Music. He was also a keen collector of glass and ceramic ware, and his collection, valued at half a million marks, was presented by his widow to the Veste Coburg, a big fortress near Coburg.

When he became Duke of Saxe Coburg and Gotha, he surrendered his British allowance of £15,000 a year and his seats in the House of Lords and the Privy Council, but he retained the £10,000 granted on his marriage in order to maintain Clarence House as his London residence.

The Duke’s only son, the Hereditary Prince Alfred, became involved in a scandal involving his mistress and shot himself in January 1899, in the midst of his parents’ twenty fifth wedding anniversary celebrations. He survived, but his embarrassed parents sent him off to Merano to recover, where he died two weeks later, on 6 February.

The Duke of Saxe Coburg died of throat cancer on 30 July 1900 at Schloss Rosenau his summer residence outside Coburg. He was buried at the ducal family’s mausoleum in the public Glockenburg Cemetery of Coburg. He was succeeded as the Duke of Saxe Coburg and Gotha by his nephew, Prince Charles Edward, Duke of Albany, the posthumous son of his youngest brother, Prince Leopold, Duke of Albany because Alfred’s next brother, the Duke of Connaught and his son, Prince Arthur of Connaught, had renounced their succession rights to the Duchy of Saxe Coburg and Gotha.