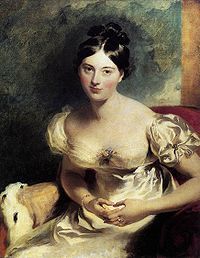 Born Margaret Power near Clonmel in County Tipperary, Ireland, she was a daughter of Edmund Power, a small landowner.

Her childhood was made unhappy by her father’s character and poverty, and her early womanhood wretched by her compulsory marriage at the age of fifteen to a Captain Maurice St. Leger Farmer, an English officer whose drunken habits finally brought him as a debtor to the King’s Bench Prison, where he died in October 1817.

Marguerite had left him some time before, moving to Hampshire where she met the Irish earl Charles John Gardiner, 1st Earl of Blessington, a widower with four children (two legitimate), seven years her senior. They married at St Mary’s, Bryanston Square, Marylebone on 16 February 1818 (only four months after her first husband’s death).

Of rare beauty, charm and wit, she was no less distinguished for her generosity and for the extravagant tastes she shared with her husband, which resulted in encumbering his estates with a load of debt.

On 25 August 1822 they set out for a continental tour with Marguerite’s youngest sister, the 21-year-old Mary Anne, and servants. They met Count D’Orsay (who had first become an intimate of Lady Blessington in London in

There they met Lord Byron on several occasions, giving Lady Blessington material for her Conversations with Lord Byron.

After that they settled for the most part in Naples, where she met the Irish writer Richard Robert Madden, who was to become her biographer. They also spent time in Florence with their friend Walter Savage Landor, author of the Imaginary Conversations which she greatly admired.

It was in Italy, on December 1, 1827, that Count D’Orsay married Harriet Gardiner, Lord Blessington’s only daughter by his former wife. However, Harriet Gardiner and Count D’Orsay soon separated. The Blessingtons and the newlywed couple moved to Paris towards the end of 1828, taking up residence in the Hôtel Maréchal Ney, where the Earl suddenly died at 46 of an apopleptic stroke in 1829.

Count D’Orsay, who had recently separated from his wife, then accompanied Lady Blessington to England and lived with her until her death. Their home, first at Seamore Place, and afterwards Gore House, Kensington, now the site of The Albert Hall, became a center of attraction for all that was distinguished in literature, learning, art, science and fashion. Benjamin Disraeli wrote Venetia whilst staying there.

After her husband’s death she supplemented her diminished income by contributing to various periodicals as well as by writing novels. She was for some years editor of The Book of Beauty and The Keepsake, popular annuals of the day. In 1834 she published her Conversations with Lord Byron. Her Idler in Italy (1839-1840), and Idler in France (1841) were popular for their personal gossip and anecdote, descriptions of nature and sentiment.

Early in 1849, Count D’Orsay left Gore House to escape his creditors; subsequently the furniture and decorations were sold in a public sale successfully discharging Lady Blessington’s debts. Lady Blessington joined the Count D’Orsay in Paris, where she died on June 4, 1849 of a burst heart. On examination it was found that her heart was three times normal size.

Her Literary Life and Correspondence (3 vols.), edited by Richard Robert Madden, appeared in 1855. Her portrait was painted in 1808 by Thomas Lawrence and can be seen in The Wallace Collection, London.