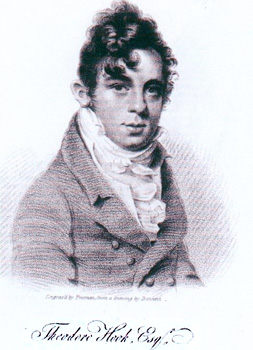 Theodore Edward Hook 1788 - 1841 was a British author who was the founder of the John Bull newspaper which directly influenced British history in 1820.

Hook created the style of political satire which has lasted to the present, perpetrated the Berners Street Hoax, invented to post card and was the best selling novelist before Charles Dickens

Theodore Hook was a friend of the Countess of Blessington, William Hering, Charles James Mathews, and Frederick Hervey Foster Quin.

The Countess of Blessington describes Hook as ’all mirth and jocularity abroad’ but ’subject to violent revulsion of feelings, to gusts of sadness, and fits of dejections of spirits’ which were obvious to his private friends.

The Countess of Blessington reveals that John Bull was set up to specifically to ’abuse the Queen’s friends, against the Brandenburg House Party’, and that John Bull made Hook a wealthy man, though he died in debt.

Theodore Hook spent a year at Harrow, and subsequently matriculated at Oxford, but he never actually resided at the university.

His father, James Hook, the composer of numerous popular songs, took great delight in exhibiting the boy’s extraordinary musical and metrical gifts, and the precocious Theodore became the little pet lion of the green room.

At the age of sixteen, in conjunction with his father, he scored a dramatic success with The Soldier’s Return, a comic opera, and this he rapidly followed up with a series of over a dozen sparkling ventures, the instant popularity of which was hardly dependent on the inimitable acting of John Liston and Charles Mathews.

But Hook gave himself up for some ten of the best years of his life to the pleasures of the town, winning a foremost place in the world of fashion by his matchless powers of improvisation and mimicry, and startling the public by the audacity of his practical jokes, the most famous of which has become known as the Berners Street Hoax.

His unique gift of improvising the words and the music of songs eventually charmed the Prince Regent into a declaration that something must be done for Hook. The prince was as good as his word, and Hook, in spite of a total ignorance of accounts, was appointed accountant general and treasurer of the Mauritius with a salary of £2000 a year.

For five delightful years he was the life and soul of the island, but in 1817, a serious deficiency having been discovered in the treasury accounts, he was arrested and brought to England on a criminal charge. A sum of about £12,000 had been abstracted by a deputy official, and for this amount Hook was held responsible.

During the tardy scrutiny of the audit board he lived obscurely and maintained himself by writing for magazines and newspapers. In 1820 he launched the newspaper John Bull, the champion of high Toryism and the virulent detractor of Queen Caroline.

Witty, incisive criticism and pitiless invective secured it a large circulation, and from this source alone Hook derived, for the first year at least, an income of £2000. He was, however, arrested for the second time on account of his debt to the state, which he made no effort to defray.

In a sponging house, where he was confined for two years, he wrote the nine volumes of stories afterwards collected under the title of Sayings and Doings (1824-1828). In the early 1820s he helped the singer Michael Kelly compile his Reminiscences, it includes details of working with Mozart.

In the remaining twenty three years of his life he poured forth no fewer than thirty eight volumes, besides numberless articles, squibs and sketches. His novels are not works of enduring interest, but they are saved from mediocrity by frequent passages of racy narrative and vivid portraiture. The best are Maxwell (1830), Love and Pride (1833), the autobiographic Gilbert Gurney (1836), Jack Brag (1837), Gurney Married (1838) and Peregrine Bunce (1842).

Incessant work had already begun to tell on his health, when Hook returned to his old social habits, and a prolonged attempt to combine industry and dissipation resulted in the confession that he was done up in purse, in mind and in body too at last.

His writings in great part are of a purely ephemeral character; and the greatest triumphs of the improvisatore may be said to have been writ in wine.

Putting aside, however, his claim to literary greatness, Hook will be remembered as one of the most brilliant, genial and original figures of Georgian times.