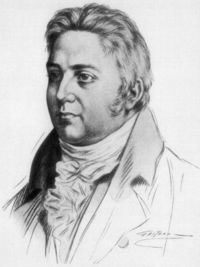 Samuel Taylor Coleridge 1772 – 1834 was an English poet, critic, and philosopher who was, along with his friend William Wordsworth, one of the founders of the Romantic Movement in England and one of the Lake Poets.

Coleridge was also a friend of the Wedgewood family,

He is probably best known for his poems The Rime of the Ancient Mariner and Kubla Khan, as well as his major prose work Biographia Literaria.

Samuel Taylor Coleridge declared in 1830, that ‘all remedies without exception are in their effects diseases,’ which is a restatement of the homeopathic law simila similibus curenter.

Coleridge explains that ‘… mercury strongly illustrates the theory de vi minimorum. Divide 5 grains into 50 doses and they may poison you irretrievably.’

’Were they not, they would be diet, not medications. A medicine is the medium _a liquid _between food and poison, each taken in its notional absoluteness. What is either assimilated or naturally expelled is food; what the vital energy cannot act on, but which acts on the vital energy, is poison; what is digested, but not assimilated, is capable of being a medicine.

“Thus thelematic chirurgery produces motions of the nerves, that acts on the system as an alien power, instead of blending and harmonising with it; it is a medicine that heals by disease.

At university, Coleridge was introduced to political and theological ideas then considered radical, including those of the poet Robert Southey. Coleridge joined Robert Southey in a plan, soon abandoned, to found a utopian commune-like society, called pantisocracy, in the wilderness of Pennsylvania.

In August 1814, Coleridge was approached by Lord Byron’s publisher, John Murray, about the possibility of translating Johann Wolfgang von Goethe’s infamous occult classic Faust (1808). Coleridge was regarded by many as the greatest living writer on the demonic and he accepted the commission, only to abandon work on it after six weeks.

Until recently scholars have accepted that Coleridge never returned to the project, despite Johann Wolfgang von Goethe’s own belief in the 1820s that Coleridge had in fact completed a long translation of the work. In September 2007, Oxford University Press sparked a heated scholarly controversy by publishing an English translation of Johann Wolfgang von Goethe’s work which purported to be Coleridge’s long lost masterpiece. The text in question first appeared anonymously in 1821.

Coleridge was widely known to have been a regular user of opium as a relaxant and analgesic. The degree to which he experimented with the drug as a creative enhancement is not clear. Although Coleridge largely kept his addiction as hidden as possible from those close to him it became public knowledge with the 1822 publication of Confessions of an English Opium Eater by his close friend Thomas de Quincey. The Confessions painted a rather negative picture of Coleridge and his reputation suffered accordingly.

Robert Southey experimented with laughing gas, his sensations were reported by the The North American Journal of Homeopathy in 1866. It was common practice for allopaths to give Laudanum out willy nilly in those days, and Coleridge reports that he first took opium for a swelling in his knees, though there is doubt surrounding his own explanations for his addiction.

It seems that experimenting with drugs to poor effect is not a modern phenomena. English poet and essayist Thomas De Quincey speculated, in his own Confessions of an English Opium Eater, that the mysterious figure, the Person from Porlock may have been Coleridge’s own physician, Dr. P. Aaron Potter, who regularly supplied the poet with laudanum.

However, some help was at hand:

In April of 1816 Coleridge’s friend and physician, Joseph Adams, put him in touch with a Highgate doctor named James Gillman with the intention of placing Coleridge in his fulltime care and effect a cure to his addiction problems.

Although James Gillman initially had no intention of taking this stranger into his household, he was so charmed by the poet on their first meeting that he agreed to take him in and attempt a cure. Coleridge spent most of the rest of his life in the Gillman house with only brief periods away.

James Gillman was ahead of his time as a physician of addiction and although he was never able to entirely stop Coleridge’s intake of opium, he managed to bring it under greater control for many years. It is surely to Gillman’s treatment and friendship that we owe much of Coleridge’s later prose works, particularly his Biographia Literaria, Lay Sermons, and Opus Maximum.