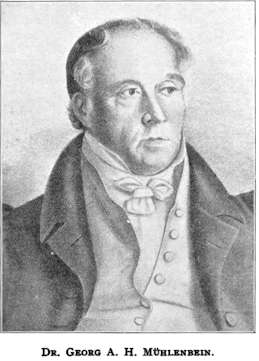 Georg August Heinrich Muhlenbein 1764 - 1845 was a German orthodox physician who converted to homeopathy to become one of the founders and the President of the Central Society of Homeopathic Physicians.

Muhlenbein was a very celebrated physician of the homeopathic school, and one like Hahnemann, who lived to celebrate the 50 th Doctor Jubilee. His name appears as a contributor to the Hahnemann Jubilee of 1829 and is also in the Zeitung list of 1832.

The British Journal contains the following: Homeopathy has to deplore the loss of one of her most eminent German champions, who was among the foremost who perceived the truth and beauty of the doctrines of Samuel Hahnemann, and contributed meritorious ways to advance them.

George Augustus Henry Muhlenbein, Doctor of Medicine, Privy Counsellor, Knight of the Order of Henry the Lion, expired at Schoningen, in Brunswick, on the 8th of January, last year, in the 81st year of his age.

After completing his medical studies and receiving his degree at Helmstadt, in 1789 he commenced practice in his native town of Konigslutter, but soon afterwards removed to Brunswick, and was appointed district physician in Schoningen, where he was greatly distinguished during a pestilential fever that invaded the town for hit zeal and humanity towards the poor under his care.

About this time he made Samuel Hahnemann’s acquaintance, who then resided in Konigslutter, but he did not then embrace the novel doctrines of the great Reformer.

He was one of the first and most zealous in introducing vaccination into his district, on which subject he wrote several papers in Christoph Wilhelm von Hufeland’s journal and elsewhere.

During a very fatal epidemy of Scarlatina, which broke out on the Prussian border, he displayed great activity, for which he was rewarded by the Prussian Academy of Sciences with their silver medal of merit, and by the Landgrave of Hesse Homburg with the title of Hofrath.

After this he established himself in Brunswick, where he was nominated Assessor of the Board of Health, and was subsequently appointed body physician to the reigning Duke.

In 1822 he became acquainted with Homeopathy by the perusal of Samuel Hahnemann’s Materia Medica, and after having practiced according to the doctrines of the prevailing school for thirty three years he embraced the homeopathic system, as we learn from his confession of faith in the sixth volume of the Archiv.

During his subsequent life he practiced Homeopathy with great success, and rendered important services in its propagation. He may be justly termed the Apostle of Homeopathy in the north of Germany.

The 50 th anniversary of the day when he received his doctor’s degree was celebrated with much rejoicing by his friends and admirers.

A medal was struck in his honour, and a sum of money, subscribed by his friends for a testimonial to him, was devoted, at his request, to the encouragement of provings of medicines.

He was one of the founders of the Central Society of Homeopathic Physicians, of which be was once elected president.

His energies and efforts in the homeopathic cause continued unabated till a very advanced period of life, and when he found it impossible to obtain the repeal of the law against the dispensing of medicines by physicians, he established a homeopathic laboratory in Brunswick, although his incessant engagement in active practice prevented him writing much, he nevertheless succeeded ill converting to Homeopathy many allopathic physicians, who are now its zealous adherents.

In personal appearance he was stout, broad chested, lively in his movements, and manly and erect in his sit. His forehead was expansive, his eye piercing, and he was not deficient in eloquence. His whole appearance was dignified, and inspired confidence, his manners towards his patients extremely kind and winning.

He enjoyed good health until within a few years of his death, when he fell into bad health, probably from over exertion, as he always seemed to forget his advanced age and never took any care of himself nor spared himself any labour. Homeopathy has lost in him an undaunted defender of the truth, the sick a most successful practitioner, and the poor a benevolent friend.

“Muhlenbein was Doctor of Medicine, Privy Councilor, Knight of the Order of Henry the Lion, and member of several learned societies.

In him Homeopathy loses one of its oldest veterans and one of its most faithful champions ever since the year 1822.

He was born on the 15th of October, 1704, at Koeningslutter in Brunswick, where his father was a ducal steward, and Muhlenbein received his first instruction through a tutor, afterwards in the public school there: but his further instruction in the ancient languages he received at Holzminden.

In the year 1784 he entered the university of Helmstaedt, where he especially profited from the lectures of the well known royal councillor, Beireis, and the Counselor of Mines, von Crell, while studying medicine and chemistry.

In order that he might slake special studies in anatomy, he went for some time to Brunswick, but returned to Helmstaedt to obtain his degree. This he received on the 2d of November, 1789, after defending his dissertation “De Typho.”

At first he for a short time, took up medical practice in his native town. Then he turned to Nieuburg on the Saale: but owing to defective medical supervision and insufficiency of the pharmaceutical establishment there he remained only a short time, and then settled in Brunswick, where he was appointed as physician for the poor.

Soon afterwards the resident physician at Schoningen died of putrid fever which was raging their as an epidemy, and Muhlenbein received from the Duke of Brunswick the honorable but dangerous commission of supporting with his counsel and aid the inhabitants of Schoningen the depraved of medical assistance.

He came near being a victim of his zeal and philanthropy, for also he was seized by the malignant disease, and only after a long confinement his vigorous constitution triumphed and he recovered.

About this time he first made the acquaintance with Samuel Hahnemann, who then was living in Koeningslutter, but difference of views and opinions then prevented a closer friendly intimacy with the great reformer.

(The memory of one of the oldest, most zealous and warmest friends of Homeopathy, a Muhlenbein, who so soon followed the great master, could not he omitted from the Archiv. f. d. Hom. Heilkunst.

The monument erected to him by Friedrich Jakob Rummel in the [_](http://books.google.com/books?id=7paox_ZflsMC&pg=PA274&dq=Allgemeine+Hom%C3%B6opathische+Zeitung&lr=&ei=8nxaSdi5OJSWMvLsoaUI)Allgemeine homöopathische Zeitung_ (vol. XXVIII, No. 2) is so worthy of him and so suitable that we find nothing in it that we would see changed; we therefore do not hesitate to transfer it unaltered to the Archiv.)