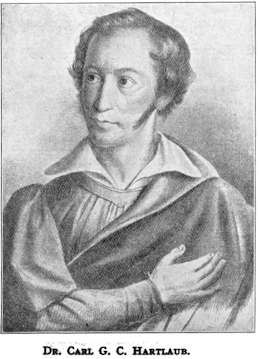 Hartlaub was a colleague of Karl Friedrich Gottfried Trinks.

Hartlaub was born in Stollberg in Chemnitz, the son of a doctor. As his father died in 1813, he had to worry at an early age about his livelihood. As a student of homeopathy, he participated in the pharmaceutical trials by Jorg.  In 1824, he obtained his PhD with a thesis on bloodletting. His younger brother Hermann was also a homeopath and studying medicine in Leipzig.

Hartlaub published many articles, and he he wrote for the Archive of homeopathic, and for the Annals of Karl Friedrich Gottfried Trinks homeopathic clinic and from 1828 to 1831. He died in February 1839 in Brunswick, only 43 years old.

”Though I was more intimate with him than with Caspari , I can say still less his brother is still living, a true friend and advocate of Homeopathy, who can easily supply the deficiency of my narrative.

“Though I was more intimate with him than with Carl Gottlob Caspari, I can say still less his brother is still living, a true friend and advocate of Homeopathy, who can easily supply the deficiency of my narrative.

“He was Carl Gottlob Caspari’s most intimate friend, and I have learned from his own lips that their conversation turned chiefly upon Homeopathy and the manner of advancing its interests.

“In 1829 In 1829 Hartlaub left Leipsic in consequence of an invitation from Georg August Heinrich Muhlenbein to take up his residence at Brunswick to assist him in his extensive practice, to which he could no longer attend on account of the infirmities of advancing years.

“I cannot think that he was very happy in his new residence, at least the contrary was currently reported, and one might easily suppose that such would have been the case from Georg August Heinrich Muhlenbein’s imperious temper, which was often manifested with great rudeness.

“He died, if I mistake not, of a nervous fever - many years before Georg August Heinrich Muhlenbein

Pierre Augustus Rapou says: “Hartlaub was the most Prolific writer of our school. His works, less rich in theoretic dissertations than those of Carl Gottlob Caspari, embrace more regarding practical medicine.

“He applied himself at first in arranging our pathogeneses in a practical form, and formed a judicious summary and methodical classification of the phenomena.

“This manner of labor in which George Adolph Weber, Ruckert, Clemens Maria Franz Baron von Boenninghausen and Gottlieb Heinrich Georg Jahr later won great renown, was a source of great honor to this practitioner of Leipsic.

“Notwithstanding his feeble constitution, his failing health and his short existence (he died young), he gave to our literature many extended works, the labor on which would seem to have required a long life or the concurrence of a society of savants.

“About 1830 About 1830 Hartlaub left Leipsic to settle at Dresden near his ancient colleague, Karl Friedrich Gottfried Trinks, and with him commenced to edit a clinical journal. This journal appeared in under the title Annals of the Homeopathic Clinic.

“His aim was to contribute to perfecting our method by publishing constantly observations in detail on the treatment of many varieties of disease: it was to complete, to verify, the pathogenesis by means of the clinic, and to fix the new medicine on a firmer and surer basis. These Annals were published till 1834, at which time Hartlaub was called to attend the Duke of Brunswick.

Pierre Augustus Rapou says that Carl Preu of Nuremberg, who was the first to prove the effects of the mineral waters on the healthy body, about 1826 interested Hartlaub also in these experiments.

This biography is extracted from the book of Thomas Lindsley Bradford: The Pioneers of Homeopathy 678 pages, William Boericke (Philadelphia, 1897).

Hartlaub wrote _The Child’s Homeopathic Physician_, __Nonnulla de venaesectionis in organismum universum vi. et in curan da niminatim inflammatione usu, Short Treatise on the Homoeopathic Method of Cure Prepared for the Laity, The Education of Children, A word to Parents and Teachers, .The Art of Preserving Health and of Prolonging the Life, Practical Medicine according to the Principles of Homeopathy, Annals of the homoeopathic Chide,  Pure Materia Medica, Systematic Effects of the Pure Effects of Medicine for the Practical Use of Homoeopathic Physicians, Systematic Presentation of the Antipsoric Remedies in their Pure Effects, Principles of the New Healing Method Agreeing with Nature, called Homeopathy, Catechism of Homeopathy.