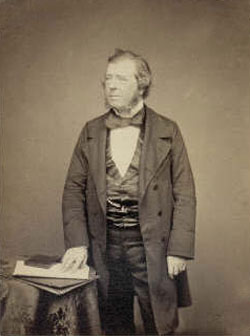 Samuel Lover 1797 – 1868 was an Irish songwriter, novelist, as well as a painter of portraits, chiefly miniatures.

Samuel Lover was a patient of Frederick Hervey Foster Quin, and a friend of the Countess of Blessington.

Irish novelist, dramatist, song?writer, and painter. Primarily known for his miniature paintings, Lover was also a gifted musician and writer, who took a strong interest in Irish folklore. For instance, he collected tales and anecdotes from the Irish peasantry in Legends and Stories of Ireland (1831), and his two novels, Rory O’More (1837) and Handy Andy (1831), incorporate a great deal of Irish folklore.

In 1844, after his eyesight began to fail, he began touring England and America performing Irish ballads, songs, and tales that were very successful and contributed to the rise of Irish national consciousness.

Lover began life as an artist, and was elected in 1828 a member of the Royal Hibernian Academy -  a body of which two years afterwards he became secretary.

He acquired repute as a miniature painter, and a number of the local aristocracy sat to him for their portraits. His love for music showed itself at an early age. At a dinner given to the poet Thomas Moore (also a patient of Frederick Hervey Foster Quin) in 1818 Lover sang one of his own songs, which elicited special praise from Thomas Moore.

One of his best known portraits was that of Niccolo Paganini (a patient of Samuel Hahnemann), which was exhibited at the Royal Academy.

Lover attracted attention as an author by his Legends and Stories of Ireland (1832), and was one of the first writers for the Dublin University Magazine. He went to London about 1835, where, among others, he painted Henry Peter Brougham 1st Baron Brougham and Vaux in his robes as Lord Chancellor.

His gifts rendered him popular in society; and he appeared often at the Countess of Blessington’s evening receptions. There he sang several of his songs, which were so well received that he published them (Songs and Ballads 1839). Some of them illustrated Irish superstitions, among these being  Rory O’More,  The Angel’s Whisper, The May Dew and The Four leaved Shamrock.

In 1837 appeared Rory O’More, a National Romance, which at once made him a reputation as a novelist; he afterwards dramatized it for the Adelphi Theatre, London. In 1842 was published his best known work, Handy Andy, an Irish Tale.

Meanwhile his pursuits had affected his health; and in 1844 he gave up writing for some time, substituting instead public entertainments, called by him “Irish Evenings”, illustrative of his own works. These were successful both in Great Britain and in America.

In addition to publishing numerous songs of his own, Lover edited a collection entitled The Lyrics of Ireland, which appeared in 1858. He died on the 6th of July 1868.

Besides the novels already mentioned he wrote Treasure Trove (1844), and Metrical Tales and Other Poems (1860).