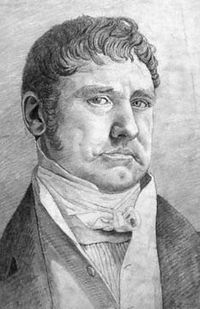 William Gell 1777 – 1836 was an English classical archaeologist. He was a fellow of the Royal Society and the Society of Antiquaries of London, and a member of the Institute of France and the Royal Academy in Berlin.

William Gell was an advocate of homeopathy (Anon, The Journal of the British Homeopathic Society, Volume 9, (1882). Multiple pages), and he consulted homeopath Georg von Necker, and he was a friend of Frederick Hervey Foster Quin, the Countess of Blessington and John Gardner Wilkinson.

Born at Hopton in Derbyshire, the son of Philip Gell and Dorothy Milnes (daughter and coheir of William Milnes of Aldercar Park). The Gell family was one of the oldest families in England with a tradition of service in the Army, Navy, Parliament and the Church going back to 1209, in the reign of King John.

His great grandfather was the parliamentarian Sir John Gell and his uncle was Admiral John Gell.Gell was educated at Derby School and Emmanuel College, Cambridge. He matriculated there in 1793, took a BA degree in 1798 and an MA in 1804, and was elected a fellow of Emmanuel.

These travels resulted in several publications, e.g. Geography and Antiquities of Ithaca and Itinerary of Greece, with a Commentary on Pausanias and Strabo. With these publications he achieved fame in the scholarly circles as a classical topographer.

His numerous drawings of classical ruins and localities, executed with great detail and exactness, are preserved in the British Museum. Gell was a thorough dilettante, fond of society and possessed of little real scholarship. Nonetheless his topographical works became recognized text-books at a time when Greece and even Italy were but superficially known to English travellers.

He was a fellow of the Royal Society and the Society of Antiquaries of London, and a member of the Institute of France and the Royal Academy in Berlin.

His best known work is Pompeiana; the Topography, Edifices and, Ornaments of Pompeii, published between 1817 and 1832, in the first part of which he was assisted by John Peter Gandy. It was followed in 1834 by the Topography of Rome and its Vicinity. He wrote also Topography of Troy and its Vicinity (1804); Geography and Antiquities of Ithaca (1807); Itinerary of Greece, with a Commentary on Pausanias and Strabo (1810); and Itinerary of the Morea (1816). Although these works have been superseded by later publications, they continue to provide valuable information for the study of classical topography.

He is, together with his friends Edward Dodwell and Keppel Richard Craven, by some modern scholars seen as the founder of the study of the historical topography of the hinterland of Rome.His works and notebooks proved very valuable for the topographical studies done by Thomas Ashby at the beginning of the 20th century.