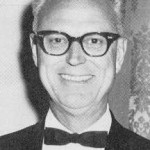 In the 1972 Trident Air disaster, 16 local Homeopathic doctors were killed and two benches in Queen square are dedicated to them.

Dr. T F Stewart, medical superintendent of Glasgow Homeopathic Hospital, and his wife Dr. Elizabeth Stewart, died in the Trident air disaster at Heathrow on 18.6. Dr. Stewart was 62 and his wife 59.

Thomas Fergus Stewart was born on 29.4.1910 and graduated in medicine at Glasgow University in 1936 after distinguishing himself at rugby and boxing. After holding house physician posts at the Glasgow Homeopathic Hospital, Yorkhill and Bellshill, he was dispensary physician at the Victoria Infirmary from 1939 to 1941. He had gained the degree of FRFPS in 1938 and the diploma of membership of the Faculty of Homeopathy in 1941.

Entering the Royal Air Force in 1941, he rose to the rank of squadron leader by 1946. He continued his association with the City of Glasgow squadron (602) Royal Auxiliary Air Force after the war as senior medical officer and developed his general practice together with his wife, Dr. Elizabeth Somerville Hamilton in the Langside area of Glasgow.

He was always a tremendous enthusiast for the promotion of homeopathy, was president of the British Congress at Gleneagles in 1961, and in the lat few years had been British representative of the International Homeopathic League, attending congresses in Paris, Athens, London, Buenos Aires, and Philadelphia. He contributed numerous papers to the British Homeopathic Journal and took a prominent part in post graduate teaching in Glasgow.

Tommy Stewart had a wide range of interests. A sincere and practicing Christian, he was an office bearer of the Trades House Lodge of Glasgow and a member of the Kelvin Rotary Club. He was a keen skier and sailor, taking up both these sports in his fifties. In working with him, first in practice and then in hospital, I always found him a man of tremendous energy and enthusiasm. He was an optimist and could always see success lying ahead, and his own personal efforts were in no small measure associated with the fruition of the plans for the new homeopathic hospital due to be built shortly in Glasgow. His wife Betty, who also graduated in 1936, was a gentle and sincere person and devoted much of her time to the work of the hospital. Both will be sadly missed by patients and colleagues alike. They are survived by a son and a daughter. Hamish William Boyd.