Majorie Golomb Feigenbaum 1922 - 1972 was a homeopath at the Royal London Homeopathic Hospital who who died in the Staines plane crash in 1972.

In the 1972 Trident Air disaster, 16 local Homeopathic doctors were killed and two benches in Queen Square are dedicated to them. 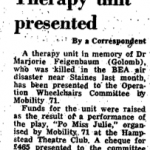 Marjorie Golomb was a colleague of Erich Kurt Ledermann.

Dr. Marjorie Golomb, clinical assistant to the Royal London Homeopathic Hospital, died in the Trident air disaster at Heathrow on 18.6.1972. She was 49.

Marjorie Golomb was born on 4.11.1922 at Hove. Graduating at the Royal Free Hospital in 1946, she worked in general practice at Wembley until her marriage, after which she was for many years a school medical officer in the London Area. As her children grew older and she felt able to give more time to professional work she held posts in psychiatry, dermatology and homeopathy and took the diploma of membership of the faculty of Homeopathy in 1962. She finally chose to make her career in dermatology and held dermatological posts at several hospitals in and around London, including the Royal London Homeopathic Hospital, to which she was appointed in 1962, and St. John’s Hospital for Diseases of the Skin, to which she was appointed in 1971. Three years ago she became a Justice of the Peace for the Borough of Hampstead.

Marjorie’s personal qualities were outstanding and made her a most remarkable doctor. A person completely unselfish in all aspects of her life and professionally modest, she never sought the limelight. The warmth and generosity with which she gave of herself knew no limit, and her devotion to her family as wife, mother and daughter was truly remarkable. A woman of high and sensitive intelligence with a ready wit, courageous and kind, her calm presence always raised everybody’s spirits. To her friends, colleagues and family her loss is indeed a heavy one. Her husband died a year ago and she is survived by three daughters. VC.