Oswald Schlegel 1871 - 1953 MD graduated University in Greifswald 1913, and was a German Jewish homeopathic physician at the Robert Bosch Homeopathic Hospital.

Oswald Schlegel and his father Emil Schlegel fled Nazi persecution in World War II to find refuge in America. The Schlegel family had already many family members in the Americas.

Emil Schlegel knew Samuel Hahnemann and he was a colleague of Pierre Schmidt and a friend of Rudolf Steiner.

Oswald Schlegel was a colleague of August Bier.

The Robert Bosch Homeopathic Hospital was one of the major facilities for homeopathy in Wuerttemberg; it was opened in 1940, and well known names in homeopathy the postwar years have worked there, such as: Hermann Schlueter, Alfons Stiegele, Erich Unseld, the most famous medical director was probably Otto Leeser and his senior Julius Mezger.

My first experience in drug proving - When Hahnemann had discovered and proven the truth and the meaning of the Law of Similars, he was ready, in an unusual manner, to bring the needed sacrifice to carry out his convictions and to put into daily practice the Law newly discovered.

We never see him hesitate in practicing his convictions, and when harassed by enemies of his practice it became necessary for him to change residences repeatedly. Such enforced changes naturally greatly curtailed his much needed income.

His and his family’s welfare was often brought to the brink of destruction as a result of his economic limitations emanating from his faithfulness in executing in a practical way the convictions of his experiences and in bringing them down to the basic doctrines as recorded in his Organon.

Like other great scientists, he was the indomitable, persistent, unbending instructor promulgating his convictions.

Let us not forget that Hahnemann was forced to leave Leipzig, that had so much to offer him, because his enemies, the doctors, and especially the apothecaries, resented his independent dispensation of medicines and there would be no profit for the druggists. They did everything possible to block his success. Therefore, he again sacrificed everything to find shelter in a small duchy that offered him protection and the privilege of dispensing his own medicines.

In a previous statement we referred to the difficulties that homeopaths had with the pharmaceutists of that day because of their great doubt of the value and efficacy of homeopathic medicines.

Today the picture is entirely different in that we must even guard against those who falsify, and under the name of Homeopathy offer medicines not carefully prepared. The true homeopath must be certain that the drugs offered are truly homeopathically prepared. It must be as Hahnemann said, “Macht’s nach, aber macht’s genau nach. Imitate, but do it exactly.”

Not every reader has had the privilege of proving a homeopathic drug, but no doubt some have at times wondered how these drugs are proven and how all those symptoms are discovered and recorded.

I wish to give you my own experience of being an involuntary or accidental subject in the proving of the effects of Arum triphyllum, or Jack in the Pulpit, about 40 years ago.

It was in the spring of 1913 that I took a hike into the woods with my father, the late Dr. Emil Schlegel. We came upon a clearing in the woods, and father pointed out to me the young leaves of a plant that we could not identify. For a better acquaintance, he bade me pluck a leaf, bite off part of it, chew it well, and then spit it out. This I did.

Within a very short time I experienced an unusual burning and needling on my tongue, which is characteristic of the plant I tasted, and labeled it Arum triphyllum or Jack in the Pulpit. The sensations on the tongue soon disappeared, and the matter was forgotten.

A few days later I noticed a rather unwelcomed drowsiness and listlessness overtake me just when I had planned to be of some assistance to my father. Being 26 and an aspiring doctor, I thought possibly a short noonday nap would easily take care of the matter.

However, when later I noticed that my temperature had risen to 100F, I spent an entire day in bed and was disgusted at this unexpected flare up. My mouth became very dry, but this didn’t receive much thought on my part.

Then, when my father asked me for a sample of urine in the course of the second day, I suddenly realized that within the last 24 hours I hadn’t drained, and then very little. It was concentrated, sour and free from albumen. I felt no irritation in the bladder for all this, but later passed considerably more water.

After this, however, the dryness in my mouth and throat increased with such annoyance that I awoke in the night. Then, however, when I took water, a swallow at a time, it didn’t even reach the dry spot; only after the development of some saliva did I get relief.

After breakfast, after much hacking and coughing, I finally released a lump of phlegm from the back of the nose. During these days the glands of my mouth and neck were taken with such a swelling that I was convinced something very serious was developing.

The gums, the interior of my mouth and throat, were covered with the same red inflammation that started in my nose. It then became quite spotted, which was especially noticeable on the gums. My temperature again rose, and I was convinced that I had contracted a serious case of scarlet fever.

While I studied the case and the entire picture, I took Mercury. At the same time my father followed these unusual symptoms in his references and symptomatologies and always came back with greater confidence to Arum triphyllum.

In homeopathic treatment Arum triphyllum definitely belongs to the scarlet fever remedies, and the one symptom of a scarce flow of urine. The repertory adds that if by the use of Arum triphyllum the urine flow increases, “then you have selected the correct remedy.”

In succession, then, this red eruption now spread over my arms and the entire chest, so that my mother diagnosed me the next morning as definitely having scarlet fever. But the most disagreeable of the symptoms remained to be the painful dryness of the mouth and throat and finally broke out in painful sores.

During all this time, my father, as the final authority on remedies, had definitely concluded that this was a clear cut Arum triphyllum case. This he also deduced from my recent testing of the Arum triphyllum leaf in the woods. This, then, being the case, he followed it professionally and without giving any counter drugs he let this picture develop in its specific course. After eight days I slowly began to feel better, and gradually my listlessness and tired feeling left me.

I had been back at work for several days, when one morning I awoke with an unusual sensation on the tongue. It was no longer that smooth flexible organ that had already engaged in so many verbal activities. It now felt more like a piece of wood. It seemed entirely too big, up to its very root. It was sensitive, tight and practically immovable.

When, later in the morning, I stepped to the mirror to examine the under side, moving the tongue up, I was greeted by two sprays of milky fluid that gushed out of my mouth against the mirror. This was indeed a surprise to me and something that I had never experienced.

The little, generally unnoticeable, ganglion next to the tongue had increased to the size of a bean and was expelling this fluid milky substance. The same repeated itself after a few, not too difficult, days. One glance at the materia medica verified this reaction also as one of Arum triphyllum.

The first reaction that I experienced was about 14 days after the sampling of the Arum triphyllum leaf in the woods. One of my brothers who also was a partaker of the same had some later reactions but in lighter measure, and my third brother displayed no reaction whatever.

From this we concluded that in proving a drug not every prover will react to the same degree to the same drug. In order to react as I did there must have been an extreme local sensitiveness on my part.

Now when one who has experienced these symptoms as I have takes a good homeopathic materia medica (or pharmacology) and reads the exposition and the definiteness of the self experienced symptoms, he is stumped, and must marvel at these wonderful things.

When you have had personal experience with them, you will not so lightly forget. This has been the case with many a “doubting Thomas” in Homeopathy.

One of the best of the older American pharmacologies states under Arum triphyllum (Jack in the Pulpit) that the European Arum maculatum (spotted) and Arum triphyllum and others have the same reactions.

They contain an irritating poisonous substance that influences the mucous membrane and destroys tissue. A biting sharpness is the basic signal. The irritation affects the lips and soft gums, giving them a raw burning feeling, swelling of the glands, and thick scaly sediment in the posterior of the nose. The scarlet fever eruption, the symptoms of the tongue— everything that I experienced— is systematically explained under the Arum triphyllum proving, and written many years ago.

However, you will always meet with doubters— some because they doubt everything, and others because of their personal independence— that first begin to bend when they find some higher authority to substantiate what has been said.

Let us therefore refer to the textbook of the well known toxicologist, Lewin, and find what he says about Arum triphyllum Jack in the Pulpit:

“The spotted Arum triphyllum, if eaten by cows, will result in loss of milk, ruffled hair, shivering and death. Intestinal irritations, lesions and bleeding and swelling of the spleen will follow. Two hogs that had eaten from the flesh of such a cow took sick and one died.

“Dogs that were fed some of the meat took sick with swelling of the mouth, the lips, and the throat, and died. Snails do not eat Arum triphyllum leaves even if they have been denied food for several days. Several experiments proved this when land snails were given fresh Arum triphyllum corms; they would eagerly bite but immediately withdraw.

“The sweet tasting berries of the Arum maculatum will irritate the mouth, and after absorption will cause prickles on the skin, tenseness, heaviness in walking, dizziness and weakness in the head for several days later.

“A narcotic reaction was experienced by a child that had just bitten into part of a leaf stem. Immediately it began to cry and in a few minutes the tongue and the entire mouth were swollen, red, and inflamed.

“The reaction on various organs and tissues caused by Arum maculatum can well be anticipated after this examination of the toxic effect stated in the cited examples.”

So I learned of the secret powers of Arum triphyllum Jack in the Pulpit - in my own body. Of its value as a homeopathic remedy I have found many opportunities to appreciate it, especially in acute inflammation of the vocal cords with complete hoarseness.

Oswald Schlegel’s Obituary is in Thieme.

Oswald Schlegel and his wife Beno are buried in the Westfield East Cemetary in Wisconsin. 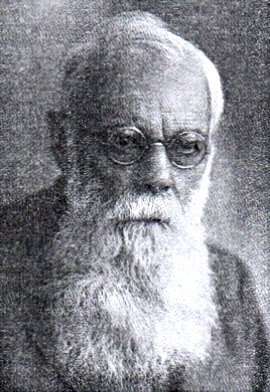 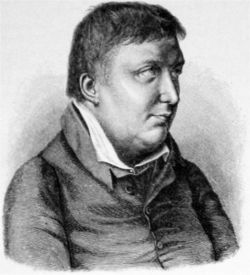 Friedrich Schlegel was married to Dorothea von Schlegel, the daughter of the greatest Jewish philosopher of the Enlightenment Moses Mendelssohn.

Friedrich Schlegel was a patient of David Ferdinand Koreff.