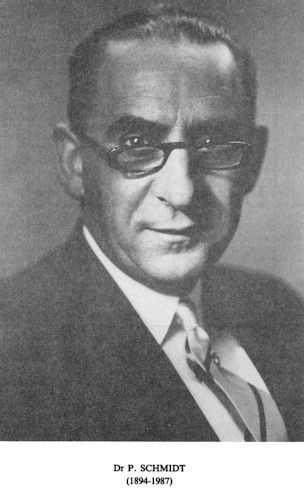 Pierre Schmidt 1894 - 1987 was a Swiss orthodox physician who converted to homeopathy and who was responsible for reintroducing classical homepathy into Europe, and he was one of the main founders of the Liga Medicorum Homeopathic Internationalis (LIGA).

In 1950, Schmidt restored LM potencies to the World for the first time since 1840.

Schmidt set up his own Foundation, The Homeopathic Fondation Pierre Schmidt, devoted to restoring homeopathy to its original basis, and comprising his own library and an annual grant to further classical homeopathy. The Schmidt Nagel Homeopathic Laboratory in Geneva was set up in 1927 by Pierre Schmidt and his wife Doral Nagel.

Pierre Schmidt was a colleague of Richard Haehl, Antoine Nebel.

Pierre Schmidt was responsible for reintroducing classical homepathy into Europe. He was a co-founder of LIGA and active participant in the organization for many years.

Dr. Schmidt was introduced to the results of homeopathic treatment during the 1918 flu epidemic while living in London. There he met both John Henry Clarke and John Weir.

In 1922 he came to the United States and began his studies with Alonzo Austin and Frederica Gladwin, who had been a pupil of James Tyler Kent’s. He became the first graduate of the American Foundation for Homoeopathy course for doctors.

Returning to his native eland he set up practice in Geneva, Switzerland. He was responsible for reintroducing classical homeopathy into Europe, teaching several generations of physicians, including Elizabeth Wright Hubbard.

Dr. Schmidt helped edit the “Final General Repertory” of James Tyler Kent, and translated the Organon into French. In 1925, he was one of the main founders of the Liga Medicorum Homeopathic Internationalis (LIGA), an international organization of classical homeopathic physicians.

In 1955 he spoke at the Hahnemann Monument in Washington, DC, on the 200th anniversary of Samuel Hahnemann’s birth. His laboratory included the latest machine for the making of potencies and his library (3000 + volumes) was one of the rarest homeopathic collections in the world.

Dr Schmidt’s efforts highlighted the great changes advocated by Samuel Hahnemann in the 6th Edition of the Organon and brought these changes to the attention of the homeopathic community.

After a journey to the USA to the followers of James Tyler Kent, where Pierre Schmidt collected the doctrines, he returned to Switzerland. He taught a lot of students who were attracted by his growing reputation…

Pierre Schmidt was a physician and insisted on the necessity of medical knowledge, including not only classical medicine and the homeopathy but also elements of acupuncture, manual medicine, knowledge about semiology, proceeding from the morphopsychology to the iridology, in passing over the graphology, the chirology and the numerology.

He also had a wide linguistic knowledge which enabled him to take the part of a translator, at a time when a method for a simultaneous translation did not yet exist. This ability also facilitated his teaching abroad and helped, when Pierre Schmidt was asked to organize seminars.

Pierre Schmidt was very appreciative of art, literature, music, theatre, painting, and traditional tapestry work. His working rooms were a real museum. But Pierre Schmidt did not neglect physical exercise either. In the winter, he skied, in the summer he went on mountain tours, with Fritz, his mountain guide. Nothing in human nature surprised him.

In 1921, soon after his marriage, he founded a laboratory with the help of his wife. There, he prepared homeopathic medicaments following the traditional technique proceeding from the origins that he had brought home from his journeys to the USA…

Furthermore, Pierre Schmidt never stopped to teach privately many students from all over the world who came to see him for a traineeship or those he met on his journeys. Because of his travelling his was nicknamed “the Globetrotter of the homeopathy“.

The result of Pierre Schmidt‘s abundant literary activity is a great number of publications in French, English, German, Italian, Spanish and Portuguese. The French speaking homeopathic world is obliged to him for the translation of the 6th edition of the Organon, of Samuel Hahnemann‘s Maladies Chroniques, of James Tyler Kent‘s Lectures and of James Compton Burnett‘s Cinquante raisons pour être homoeopathe.

In 1978, Pierre Schmidt stopped all his medical activities and lived with very good friends in Nancy. There, he died on the 15th of October 1987, aged 94 years. He left behind a great number of followers in Europe, Latin America and the subcontinent of India. They continue to pass on his work.

Pierre Schmidt was born on the 22nd of July 1894 in Neuchâtel. He was the oldest in a family of six children. From the age of 10 he wanted to be a doctor.

When he was 17, his family moved to Geneva, where he studied. He was a brilliant student. He completed his studies at the age of 26, finishing top out of 40 examinees. His father was successfully treated by a homeopath, Dr Ubert of Neuchâtel, who was determined that the 2 oldest children, Pierre and Roger, should become homeopaths. (Pierre Schmidt was also consulted Antoine Nebel).

He gave them Samuel Hahnemann’s Organon. Pierre Schidt was fascinated when he read this. He studied Latin, German, English and Sanskrit.

He had to treat a serious case of pharyngitis in a 10 year old child, which looked as though it could be diphtheria. He treated the child with mercurius cyanatus, administering 6 drops with a potency of 9CH every 2 hours. The child made a spectacular recovery.

This placed him in a dilemma. He had never seen a case of diphtheria whilst practising, and he noticed that homeopathic medicine gave him results that he did not obtain with traditional medicine.

He resolved to put homeopathy to the test, after hesitating over allopathy. Dr Schmidt re-read the Organon and Chronic Diseases from start to finish. He went to visit about twenty homeopaths in Switzerland, and Dr Mende of Zurich insisted on his going to study homeopathy in the USA, passing through London to meet John Henry Clarke, Margaret Lucy Tyler and John Weir, physician to the British royal family. He met society homeopaths in Paris, but they paid him no attention.

In 1927 he set out for the USA. It took him 14 days to cross the Atlantic. It was his intention to complete his doctoral thesis, which he entitled Laws and principles applied to current therapy by homeopathy. He went to the Flower Hospital, where he attended courses in homeopathy.

He was lucky enough to be welcomed by Dr Austin, private physician to  John Davison Rockerfeller Senior, who took him on as a pupil. Over a period of several months, Dr Austin taught him James Tyler Kent’s philosophy, the Repertory and the Materia Medica. He taught him to work with high dilutions (XM). He sent him to do a course with Frederica Gladwin in Philadelphia, where he attended consultations for 3 months.

In her will, Frederica Gladwin left him a little book, the only copy in existence. Dr Austin left him his own copy of James Tyler Kent’s Repertory, and James Tyler Kent’s diamond ring. It is thanks to the generosity of these two American doctors that he returned to Switzerland with more than 1,000 different works, 4,000 high dilutions and a sound basis of knowledge.

As soon as he returned, Pierre Schmidt began to promote homeopathy in Europe. At the age of 28, he married Dora Nagel, a pharmacist. They had two daughters, Gilberte and Yolande, both of whom sadly died at the age of 2 of encephalitis, in spite of the care with which they were surrounded. It was a difficult ordeal, and he greatly valued certain doctors who surrounded him during those grim days. He was very grateful to Antoine Nebel, who came to try and cure them. However, nothing could save them.

His wife also worked in the field of homeopathy, and set up a homeopathic laboratory. From 1921 on, Pierre Schmidt practised homeopathy in Geneva. In 1931 he headed an international homeopaths’ congress in Geneva.

He was fascinated by ophthalmodiagnosis and acupuncture. Dr Schmidt ran a great many courses. In 1946 he set up a homeopathy school in Lyon. 40 doctors attended the courses. He gave conferences in London, Barcelona and Brussels. He also trained Jost Kunzli von Fimmelsberg, who would go on to teach homeopathy in German speaking Switzerland.

In 1953 Pierre Schmidt became an honorary member of the Homeopathic Academy in Barcelona. In 1955, on the occasion of the jubilee celebrating the 200th anniversary of Samuel Hahnemann’s birth, he was invited to go to Washington with the physicians of the Queen of England and the Pope to give a conference on the founder of homeopathy. He handed on the teachings that were dear to Samuel Hahnemann.

His aim was to “use one arm to promote progress towards my ideal, and to keep the other behind my back to help future generations to achieve perfection in this unique method, the only one moving towards one law and a collection of principles for applying remedies to the sick,” as Samuel Hahnemann used to say.

Pierre Schmidt died in 1987. He left behind important works, such as the French translation of the 6th edition of Samuel Hahnemann’s Organon and the French translation of James Tyler Kent’s The Art and Science of Homeopathic Medicine. His wife, Mme Dora Schmidt Nagel, died several years later. Her laboratory still exists under the name Schmidt Nagel Homeopathic Laboratory.

Pierre Schmidt contributed to Kent’s Final General Repertory of the Homeopathic Materia Medica, and he wrote The Art of Case Taking, Defective Illnesses, The Art of Interrogation, The Privilege of Liberation Through Homeopathy, A Symposium on Dosage, Writings on Case taking, and many other publications.

The first clue to the existence of James Tyler Kent’s own personal repertory was an article in the January-February 1963 American Institute of Homeopathy Journal by K.C. Mittal. Here Ahmed Currim learned that this repertory was in the possession of Dr. Schmidt of Geneva, Switzerland.

In addition, Schmidt related that Dr. Mittal copied every correction from the two chapters Mind and Generalities into Schmidt’s own copy of an Indian edition of the book. Indeed, Schmidt’s book now contains very neatly copied corrections in a very symmetrical handwriting…

Pierre Schmidt said that after carefully doing this work, Dr Mittal had run away from Switzerland and taken the ‘Treasure’ (James Tyler Kent’s personal repertory) with him — as well as his own ‘copy’, in which he had made all the corrections…

Later, Ahmed Currim learned from Mme. Dora Schmidt-Nagel (wife of Dr. Pierre Schmidt) how her husband had acquired the ‘Treasure’. Eugene Alonzo Austin, beloved student of James Tyler Kent, had passed on the Treasure to Pierre Schmidt during his 1939 trip to the USA to learn homeopathy with one of James Tyler Kent’s best students. Plans had already been made at that point to incorporate the corrections into a future edition, but this was never done… continue reading:

Roger Schmidt, Pierre’s brother, lived in San Francisco in the 1970s and was also a homeopath.