Walter Rollin Brooks (1886-1958) was an American writer best remembered for his short stories and children’s books, particularly those about Freddy the Pig and other anthropomorphic animal inhabitants of the “Bean farm” in upstate New York.

Walter Rollin Brooks studied homeopathic medicine at the Homeopathic Medical College and Flower Hospital, but his success as a children’s author and the creator of Freddy the Pig. 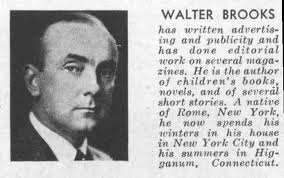 Walter Rollin Brooks was an orphan from a very young age, and attended a military academy before graduating from the University of Rochester. He trained as a homeopath in New York City and then worked for the American Red Cross (Anita Silvey, Children’s books and their creators, (Houghton Mifflin Harcourt, 2002). Page 60). Walter Rollins Brooks left New York’s Homeopathic Medical College, which he left without graduating in 1909 to pursue a career in advertising (Bernice E. Cullinan, Diane Goetz Person, The Continuum Encyclopedia of Children’s Literature, (Continuum International Publishing Group, 30 Sep 2005). Page 118. See also Michael Cart, Talking animals and others: the life and work of Walter R. Brooks, (Overlook Press, 2 Dec 2008). Pages 52 and 59).

Walter R. Brooks was born in Rome, New York, on January 9, 1886. His mother, Fanny Stevens Brooks, was the daughter of Samuel Barron Stevens, a banker and two time mayor of Rome.

His father, William Walter Brooks, was the son of Dr. Walter Rollin Brooks, an eminent Baptist clergyman and a member of the faculty of Madison University in Hamilton, NY. The university was then a Baptist theological seminary, though today - re-named - it is Colgate University.

When Walter was four, his father - who worked as a music teacher - died. Eleven years later, his mother died, as well. Walter was sent to the Mohegan Lake Military Academy in Peekskill, NY, for two years (1902-04).

1904 he went to live with his older sister, Elsie Curtice Brooks and her husband, Willliam Perrin, a distinguished homeopathic doctor and professor at the University of Rochester, where Walter was a student from 1904-1906.

In 1906 he went to New York City to study homeopathic medicine at the Homeopathic Medical College and Flower Hospital.

He dropped out of medical school at the end of 1908 and returned to Rochester where, on January 22, 1909, he married Anne Shephard. From 1910-1911 Walter worked for the Frank Du Noyer Advertising Agency in Utica.

In 1911 Walter’s two maiden aunts, Rhoda and Lucy, died within a month of each other and, apparently, Walter came into a considerable amount of money. At least he later wrote that, for some reason, he “retired” about that time.

In 1915 his first work - a sonnet titled Haunted - was published in the Century magazine. In 1917 he went to work for the American Red Cross as a publicist. He worked for the Red Cross until 1927, moving, in 1919, to New York City.

The first Freddy book, To and Again, was published in 1927. From 1928-1932 Walter worked as a book review editor and columnist for The Outlook and Independent magazine, where he was one of the first reviewers to discover the work of Dashielle Hammett.

From 1932-33 Walter worked for the New Yorker, writing Talk of the Town pieces. From 1933-1937 he was a Contributing Editor to Fiction Parade magazine and from 1938-1940 held a similar position with Scribner’s Commentator.

From 1940 until the end of his life in 1958, Walter gave up editorial work and devoted full time to Freddy and the writing of his adult short stories.

In 1937 Walter and Anne discovered Roxbury. They were originally attracted to the village by the presence of an art school at the Burro Ranch (Anne was an artist, who specialized in portraits). Within a year or so, Walter had leased property from a nearby farmer and built the cabin on a hill above Roxbury where he and Anne summered until 1948 when they moved to Roxbury year round, buying the house on Main Street that the Friends of Freddy make a pilgrimage to after conventions.

From then until 1934 he published thirty three more. Starting in September 1934, he began selling stories to Esquire and hit his stride as a short story writer. Altogether he published more than 180 stories, 25 of which starred Ed, the talking horse.

Walter published one novel for adults, Ernestine Takes Over (Morrow

The first works Brooks published were poems and short stories. His short storyEd Takes the Pledge about a talking horse was the basis for the 1960s television comedy series Mister Ed (credit for creating the characters is given in each episode to “Walter Brooks”).

His most enduring works, however, are the 26 books he wrote about Freddy the Pig and his friends. In 2009, Overlook Press will publish a biography on the life and work of Walter R. Brooks titled Talking Animals and Others by Michael Cart.

From [http://en.wikipedia.org/wiki/Walter_R.*Brooks ](http://en.wikipedia.org/wiki/Walter_R._Brooks) was’… _Born in Rome, New York, Brooks attended college at the University of Rochester and subsequently studied homeopathic medicine in New York City. He dropped out after two years, however, and returned to Rochester, where he married his first wife, Anne Shepard, in 1909. Brooks found employment with an advertising agency inUtica, and then “retired” in 1911, evidently because he came into a considerable inheritance. His retirement was not permanent: in 1917, he went to work for the American Red Cross and later did editorial work for several magazines, including The New Yorker. In 1940, Brooks turned to his own writing for his full-time occupation. Walter married his second wife, Dorothy Collins, following the death of Anne in 1952.*

The first works Brooks published were poems and short stories. His short story “Ed Signs the Pledge” about a talking horse was the basis for the 1960s television comedy series Mister Ed (credit for creating the characters is given in each episode to “Walter Brooks”). His most enduring works, however, are the 26 books he wrote about Freddy the Pig and his friends. Boucher and McComas, for example, praised Freddy and the Spaceship, saying it “offers wit, sound structural plotting, genuine character-humor, and admirable English prose”…’