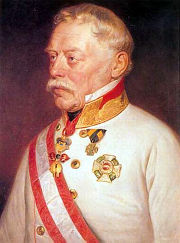 Radetzky was a patient of homeopath Johann Taubes Ritter von Lebenswarth and Christophe Hartung, a student of Samuel Hahnemann, on the recommendation of Friedrich Jaeger von Jaxtthal (who was  the physician of Klemens Wenzel Prince von Metternich), and the story of his cure of a cancerous tumour in his right eye was written up in Homeopathy Explained by John Henry Clarke in 1841, and in The British Journal of Homeopathy in 1843, and in many other homeopathic journals around the World.

There is on record the cure of a fungus tumor of the orbit, with this remedy (thuja) and Carbo vegetabilis, in the Austrian Field Marshal Radetsky.

Radetzky was born to a noble family at T?ebnice (Trebnitz) in Bohemia (modern day Czech Republic). Orphaned at an early age, he was educated by his grandfather, and after the old count’s death, at the Theresa academy at Vienna.

The academy was dissolved during his first year’s residence, and he joined the army as a cadet in the Austrian army in 1785. Next year he became an officer, and in 1787 a first lieutenant in a cuirassier regiment. He served as a galloper on Count von Lacy’s staff in the Turkish War, and in the Austrian Netherlands from 1792 to 1795.

In 1798 he married the Carniolan countess Francisca von Strassoldo Grafenberg from Trži?. The two had eight children, five sons and three daughters.

In 1795 he fought on the Rhine. Next year he served with Beaulieu against Napoleon Bonaparte in Italy, but disliked the indecisive “cordon” system of warfare which Count von Lacy had instituted and other Austrian generals had imitated.

His personal courage was conspicuous. At Fleurus he led a party of cavalry through the French lines to discover the fate of Charleroi, and at Valeggio sul Mincio, with a few hussars, he rescued Beaulieu from the enemy.

Promoted to major, he took part in Wurmser’s Mantua campaign, which ended in the fall of Mantua. As Lieutenant Colonel and colonel he displayed bravery and skill in the battles of Trebbia and Novi (1799).

At the Battle of Marengo, as colonel on the staff of Melas, he was hit by five bullets, after endeavouring on the previous evening to bring about modifications in the plan suggested by the “scientific” Zach.

In 1801 Radetzky was created a Knight of the Order of Maria Theresa.

In 1805, on the march to Ulm, he received news of his promotion to Major General and his assignment to a command in Italy under the Archduke Charles of Austria, and thus took part in the successful campaign of Caldiero.

Peace again afforded him a short leisure, which he used in studying and teaching the art of war. In 1809, now a Lieutenant Field Marshal, he fought at the Battle of Wagram, and in 1810 he was created a Commander of the Order of Maria Theresa and was awarded the colonelcy of the 5th Radetzky Hussars.

From 1809 to 1812, as chief of the general staff, he was active in the reorganization of the army and its tactical system, but, unable to carry out the reforms he desired owing to the opposition of the Treasury, he resigned the post.

In 1813 he was Schwarzenberg’s Chief of Staff, and as such had considerable influence on the councils of the Allied sovereigns and generals. Langenau, the Quartermaster General of the Grand Army, found him an indispensable assistant, and he had a considerable share in planning the Leipzig campaign and as a tactician won great praises in the battles of Brienne and Arcis sur Aube.

He entered Paris with the allied sovereigns in March 1814, and returned with them to the Congress of Vienna, where he appears to have acted as an intermediary between Klemens Wenzel Prince von Metternich and Tsar Alexander I, when the two were not on speaking terms.

During the succeeding years of peace he disappeared from public view. He resumed his functions as Chief of Staff, but his ardent ideas for reforming the army came to nothing in the face of the general war weariness and desire to “let well alone.”

His zeal added to the number of his enemies, and in 1829, after he had been for twenty years a Lieutenant Field Marshal, it was proposed to place him on the retired list. The emperor Francis I of Austria, unwilling to go so far as this, promoted him General of Cavalry and shelved him by making him Governor of a fortress.

But very soon afterwards the Restoration settlement of Europe was shaken by fresh upheavals, and Radetzky was brought into the field of war again. He took part under Frimont in the campaign against the Papal States insurgents, and succeeded that General in the Chief Command of the Austrian army in Italy in 1834.

In 1836 he became a Field Marshal. He was now seventy, but still displayed the activity of youth in training and disciplining the army he commanded. But here too he was in advance of his time, and the government not only disregarded his suggestions and warnings but also refused the money that would have enabled the finest army it possessed to take the field at a moment’s notice.

Thus the events of 1848 in Italy, which gave the old Field Marshal his place in history among the great commanders, found him, in the beginning, not indeed unprepared but seriously handicapped in the struggle with Charles Albert’s army and the insurgents in Milan and elsewhere.

By falling back to the Quadrilateral and there, checking one opponent after another, he was able to spin out time until reinforcements arrived, and thenceforward up to the final triumph at the Battle of Novara on March 23, 1849, he and his army carried all before them.

His well disciplined sense of duty to the superior officer had become more intense in the long years of peace, and after keeping his army loyal in the midst of the confusion of 1848, he made no attempt to play the part of Wallenstein or even to assume Arthur Wellesley 1st Duke of Wellington’s role of family adviser to the nation.

While as a patriot he dreamed a little of a united Germany, he remained to the end simply the commander of one of the emperor’s armies. He died in harness, though in poor health.

In military history Radetzky’s fame rests on one great achievement, but in the history of the Austrian army he is the frank and kindly “Vater Radetzky” whom the soldiers idolized. In the year following his death, another and greater Italian war broke out, and his beloved army disintegrated and was defeated in every encounter.