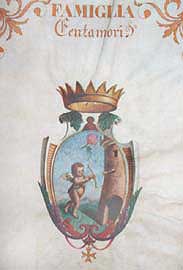 Settimio Centamori ?1812 - 1860? MD was an Italian orthodox physician who converted to homeopathy.

Centamori was the homeopath of Charles II Duke of Parma (then Duke of Lucca), and he was awarded the 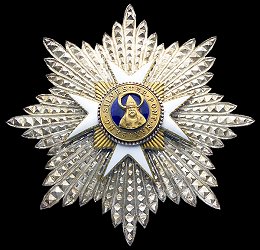 Grand Cross by Pope Gregory XVI for his services.

Translated from the Italian: Settimio Centamore in 1855 bought the house poles in Trevi. Settimio was the husband of Carlotta Bonaparte.  Costea, firstborn daughter of Lucien Bonaparte prince of Canino and brother of Napoleon Bonaparte, had married the prince in 1815 to Prossedi Don Mario Gabrielli. They had five children (three others had died at an early age): Placido and four females, all married. Dead Prince Don Mario in 1841, it said Carlotta after a year with Dr. Settimio Centamori, Settimio Centamore, but the marriage was a lot of bitterness because of the continuing disagreements between Centamore and Placido stepson.  Now there are two versions of history! Carlotta, was widowed for the second time, returned to live with his son and daughter-in-law and died in May 1865.

Dr. Centamori, having heard of Homoeopathy from Dr. Braun, about 1833, and having seen some cures, began to study and familiarize himself with the new discoveries of the immortal German, in order to enable himself to multiply the facts in favor of his doctrines.

He was therefore exposed to the usual abuse and hostility of the adherents of the old school. The success of his practice surpassed his expectation. A persecution of Dr. Centamori was commenced by the physicians and apothecaries of the old school; he was accused of administering poison, and was prohibited from practicing medicine because he was only a surgeon.

To surmount this Dr. Centamori went to Bologna and took out his degree of Doctor of Medicine. In 1837, when the cholera visited Rome, Dr. Centamori was very successful in its homeopathic treatment. but the rector of St Peter’s dying of cholera while under his treatment, he was accused of poisoning that prelate.

At a later period he went, as his physician, with Charles II Duke of Parma on his travels. Dadea says that Giuseppe Mauro, returning to Rome in 1830, converted to Homeopathy the district physician of Velletri, who not being able from advanced age to undertake the arduous study and laborious practice of the new doctrine, instilled its first principles into the mind of his son, Dr. Settimio Centamori, whom we shall presently meet among the most distinguished practitioners of Rome and Italy.