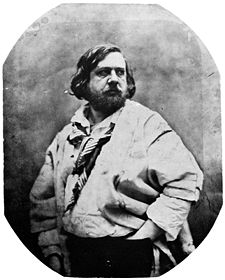 Gautier was a librarian in the court of Napoleon III, who was himself a patient of homeopath A J Davet.

The poet Theophile Gautier, for instance, received hashish samples from Moreau de Tours. In 1843 he described extensively a self experienced hashish intoxication in the Paris newspaper La Presse under the title ‘Le Club des Hachichins’. The club of hashish eaters, of which Gauthier was one of the founders, had regular meetings in Hôtel Pimodan on the Seine island of St Louis.

He and Charles Pierre Baudelaire shared a penthouse in the hotel for several years. Other prominent club members were Alexandre Dumas and Honore Daumier. Further well known contemporaries such as Honore de Balzac, Gustave Flaubert and Victor Hugo participated occasionally.

Gautier was born on August 30, 1811 in Tarbes, capital of Hautes Pyrenees departement in southwestern France. His father, Pierre Gautier, was a fairly cultured minor government official and his mother was Antoinette Adelaïde Concarde. The family moved to Paris in 1814, taking residence in the ancient Marais district.

Gautier’s education commenced at the prestigious Collège Louis le Grand in Paris (fellow alumni include Voltaire and Charles Pierre Baudelaire) where he attended for three months before being brought home due to illness.

Although he completed the remainder of his education at College Charlemagne (alumni include Charles Augustin Sainte Beuve), Gautier’s most significant instruction came from his father, which prompted him to become a Latin scholar by age 18.

While at school, Gautier befriended Gerard de Nerval and the two became lifelong friends. It is through Nerval that Gautier is introduced to Victor Hugo , a well known, established leading dramatist and author of Hernani. Victor Hugo became a major influence and is credited for giving Gautier, an aspiring painter at the time, an appetite for literature. It is at the legendary Hernani. premiere that Gautier is remembered for wearing his infamous red vest.

In the aftermath of the 1830 Revolution, Gautier’s family experienced hardship and was forced to move to the outskirts of Paris. Deciding to experiment with his own independence and freedom, Gautier chose to stay with friends in the Doyenne district of Paris, living a rather pleasant bohemian life.

Towards the end of 1830, Gautier began to frequent meetings of Le Petit Cenacle, a group of artists who met in the studio of Jehan Du Seigneur. The group was a more irresponsible version of Victor Hugo ’s Cenacle. The group counted among its members the artists Gérard de Nerval, Alexandre Dumas, Petrus Borel, Alphonse Brot, Joseph Bouchardy and Philothée O’Neddy. Le Petit Cénacle soon gained a reputation of extravagance and eccentricity, but also as a unique refuge from society.

Gautier began writing poetry as early as 1826 but the majority of his life was spent as a contributor to various journals, mainly for La Presse, which also gave him the opportunity for foreign travel and meeting many influential contacts in high society and in the world of the arts.

Throughout his life, Gautier was well traveled, taking trips to Spain, Italy, Russia, Egypt and Algeria. Gautier’s many travels inspired many of his writings including Voyage en Espagne (1843), Trésors d’Art de la Russie (1858), and Voyage en Russie (1867). Gautier’s travel literature is considered by many as being some of the best from the nineteenth century, often written in a more personal style, it provides a window into Gautier’s own tastes in art and culture.

Gautier was a celebrated abandonnée of the Romantic Ballet, writing several scenarios, the most famous of which is Giselle, whose first interpreter, the ballerina Carlotta Grisi, was the great love of his life. She could not return his affection, so he married her sister, the singer Ernestina. He was also a great lover of cats.

Absorbed in his work after the 1848 Revolution, Gautier wrote almost one hundred articles, equivalent to four solid books, within nine months in 1848. Gautier experienced a prominent time in his life when the original romantics such as Victor Hugo, Francois Rene Vicomte de Chateaubriand, Alphonse de Lamartine, Alfred de Vigny and Alfred de Musset were no longer actively participating in the literary world.

His prestige was confirmed by his role as director of Revue de Paris from 1851-1856. During this time, Gautier left La Presse and became a journalist for Le Moniteur universel, finding the burden of regular journalism quite unbearable and “humiliating.” Nevertheless, Gautier acquired the editorship of influential review L’Artiste in

The 1860s were years of assured literary fame for Gautier. Although he was rejected by the French Academy three times (1867, 1868, 1869), Charles Augustin Sainte Beuve, the most influential critic of the day, set the seal of approval on the poet by devoting no less than three major articles to a review of Gautier’s entire published work in 1863.

In 1865, Gautier was admitted into the prestigious salon of Mathilde Bonaparte, cousin of Napoleon III and niece to Napoleon Bonaparte. The Princess offered Gautier a sinecure as her librarian in 1868, a position which gave him access to the court of Napoleon III.

During the Franco Prussian war, Gautier made his way back to Paris upon hearing of the Prussian advance on the capital. He remained with his family throughout the invasion and the aftermath of the Commune, eventually dying on October 23, 1872 due to a long standing cardiac disease. Gautier was sixty two years old. He was interred at the Cimetière de Montmartre in Paris.

Armond Gautier was a Professor of Chemistry in the School of Medicine in Paris in 1899.

Emile Gautier was a homeopath in America in 1896.

George Gautier was a homeopathic physician in Paris in 1901.