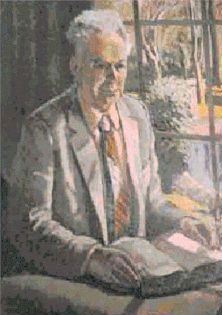 Donald Foubister was born in Orkney, but he lived latterly mostly Hertfordshire.

Donald Foubister qualified in medicine at Edinburgh University and studied homeopathy at the Royal London Homeopathic Hospital under Margaret Lucy Tyler and Douglas Morris Borland. In 1956 he was appointed Consultant Paediatrician at that hospital.

The Annual Reports list the teaching staff, many of whom are recognised for their contributions to the development of homeopathy. Donald Foubister lectured on Children’s Diseases, as did Kathleen Priestman (who was President of the Missionary School of Medicine between 1981 and 1991); Alva Benjamin taught on skin diseases, Charles Edwin Wheeler, John MacKillop and Muriel Francis Adams on general medicine; William Eldon Tucker and Philip Norman Cutner on surgery and H Dodd, who was the vascular surgeon and later became President of the Missionary School of Medicine in 1952.

N E Gillham taught dentistry and J N LeRossignol chiropody. Three doctors on the teaching staff were later appointed Royal physicians: John Weir, Marjorie Blackie and R W Davey. Llewelyn Ralph Twentyman remains the doyen of them all, surviving to tell the tale of the lectures often given in the Hospital Board Room, which were much enjoyed by everyone.

Donald Foubister was responsible for the describing and the definition of the Cancer miasm in 1958, and he was also the first person to use folliculinum.

Jacques Pierre Joseph Arthur Louis Imberechts met Donald Foubister in the British Congress in Stirling Scotland in 1975 and worked with him in several meetings a year until the latter’s death in 1988.

Donald Foubister joined the staff of the Royal London Homeopathic Hospital in 1937, not long after qualifying, and worked under John Weir, Douglas Morris Borland, Margaret Lucy Tyler and Marjorie Blackie. After the war he rejoined the hospital staff and was appointed Consultant Homeopathic Paediatrician in 1956.

Donald McDonald Foubister practised homeopathy from 1937 until his death in 1988. During his retirement he gave tutorials on this subject to many doctors from Britain and overseas..

… Originally appointed as house physician at the Royal London Homeopathic Hospital, Foubister went on to serve as a medical officer during World War II, where he practised homeopathy despite official disapproval.

Donald Foubister wrote The Carcinosin Drug Picture, Tutorials on Homeopathy, Elements of Homeopathy, Homeopathy and Pediatrics, The Significance of Past History in Homeopathic Prescribing, and articles for the British Journal of Homeopathy, and published The Homeopathic Treatment of Alcoholism by Jean Pierre Gallavardin.