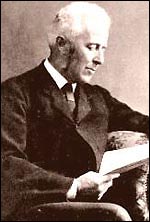 Joseph Bell JP, DL, FRCS Edin. 1837 –  1911 was a Scottish lecturer at the medical school of the University of Edinburgh in the 19th century. He was also a great grandson of Benjamin Bell, another forensic surgeon. Joseph Bell is considered a pioneer in forensic science (forensic pathology in particular) at a time when science was not often used in the investigations of crimes.

Joseph Bell was an inspiration for the fictional detective Sherlock Holmes, and a long time supporter of homeopathy (Steven Cartwright, A Re-examination of Homeopathic Philosophy and a simplified approach to practice, The Homeopath, (2002) 84, 16- 23). Joseph Bell caused outrage when he converted to homeopathy (Owen Dudley Edwards, The Quest for Sherlock Holmes: a biographical study of Arthur Conan Doyle, Volume 1983, Part 2, (Mainstream, 1983). Page 308).

http://en.wikipedia.org/wiki/Joseph_Bell Arthur Conan Doyle met Joseph Bell in 1877, and served as his clerk at the Edinburgh Royal Infirmary. Doyle later went on to author a series of popular short stories that featured the character Sherlock Holmes, whom Doyle stated was loosely based on Bell and his observant ways. Joseph Bell was aware of this inspiration and took some pride in it.

Joseph Bell also served as personal surgeon to Queen Victoria whenever she visited Scotland. During his lifetime he published several medical textbooks.

Joseph Bell was a Fellow of the Royal College of Surgeons of Edinburgh, Justice of the Peace, and a Deputy Lieutenant among his many honours… Joseph Bell died on 4 October 1911. He rests at the Dean Cemetery in Edinburgh alongside his wife, Edith Katherine Erskine Murray, their son Benjamin and next to his father’s and brother’s plots.

Joseph Bell wrote Notes on surgery of nurses, A manual of the operations of surgery, Notes on Excision of the Mamma, Notes of Clinical Lectures on Medical Cases, Case of Osteoid Cancer, Contributions to the Pathology and Therapeutics of Typhus Fever, and also articles for the Glasgow Medical Journal and other publications.

Dr. W Bell took part in a Festival in aid of the London Homeopathic Hospital in 1853.

Margaret Oliver (nee Brown) was a homeopath. She had learned her skills from Benjamin Joseph Bell in Edinburgh.