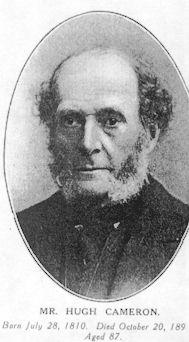 Hugh Cameron 1810 - 1897 (photo used courtesy  of Homéopathe International) MRCS Edinburgh was a British orthodox physician who converted to homeopathy to become a student of Samuel Hahnemann in Paris, and an active member of the British Homeopathic Society and he wrote articles for the The Journal of the British Homeopathic Society in 1845 and _1863_.

Hugh Cameron was a medical officer at the St. James Homeopathic Dispensary opened in 1842 at 8 King Street with Frederick Hervey Foster Quin and Samuel Thomas Partridge, and House Surgeon at the London Homeopathic Hospital, and a major Sponsor of the Homeopathic Convalescent Home in Eastbourne,

Hugh Cameron was a London homeopath listed in the Homeopathic Medical Directory of Great Britain and Ireland in 1871.

Dr Macloughlin, one of the medical inspectors appointed by the General Board of Health, visited the wards, examined the cases under treatment, and watched their progress. His statement, addressed to Mr. Hugh Cameron, a member of the medical staff, was as follows :

“You are aware that I went to your hospital prepossessed against the homeopathic system, that you had in me in your camp an enemy rather than a friend… and I need not tell you that I have taken some pains to make myself acquainted with the rise, progress and medical treatment of cholera, and that I claim for myself some right to be able to recognise the disease, and to know something of what the medical treatment ought to be, and that there may, therefore, be no misapprehension about the cases saw in your hospital, I will add that, all I saw were true cases of cholera, in the various stages of the disease, and that I saw several cases which did well under your treatment which I have no hesitation in saying would have sunk under other.

“In conclusion I must repeat to you what I have already told you, and what I have told everyone whom I have conversed, that although in allopath by principle, education and practice yet were it the will of Providence to afflict me with cholera, and deprive me of the power of prescribing for myself, I would rather he in the hands of a homeopathic than; in allopathic adviser.”

One incident, however, claims attention. In the year 1854 a terrible recrudescence of cholera, due, as was supposed, to the contamination of the water furnished by the notorious Broad Street pump, in the parish of St James’s, Westminster, ravaged the Metropolis and particularly the immediate neighbourhood of the London Homeopathic Hospital (Golden Square).

Twenty two years before, cholera had sprung suddenly upon a profession utterly unprepared to deal with it and destitute of a principle to guide them in organising the best defence against the new foe.

In 1849 it was found that their experience had not taught them much. In 1854 they had still to search among their record of cases for any agreement as to the best way out of their perplexities.

Meanwhile the homeopathic section of the profession, relying upon the principle which directs them to seek for medicines capable of producing physiological phenomena similar to those exhibited by the disease, had never been in doubt.

Samuel Hahnemann, on receiving a detailed description of the disease in its various stages from a disciple who sought his guidance, had, without seeing a case, but relying solely on his law of drug selection, prescribed a course of remedies which, alike in 1832, 1849, and 1854, proved pre-eminently successful, and which to the present day constitute the treatment mainly relied upon by homeopathic practitioners.

Thus fortified the homeopaths did not shrink from the issue offered by the cholera outbreak of 1854. The whole of the wards of the London Homeopathic Hospital were devoted to the treatment of the epidemic, and 64 cases of cholera and 331 of choleraic and simple diarrhœa were treated.

The neighbouring Middlesex Hospital received 231 cases of cholera and 47 cases of choleraic diarrhœa. Of the cholera patients treated 123 died, a fatality rate of 53.2 per cent, among the victims being one of the nurses.

William H Cameron is listed in the The British Journal of Homeopathy in 1857.

Charles Dickens uses the name Hugh Cameron as a fictional character in his Household Words in 1857.