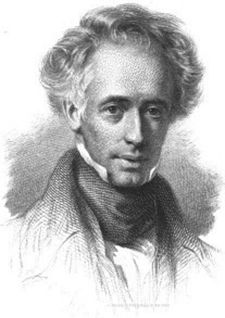 George Combe 1788 - 1858 brother of Andrew Combe, was a writer on phrenology and education. He was born in Edinburgh, where for some time he practiced as a lawyer.

Latterly, however, he devoted himself to the promotion of phrenology, and of his views on education, for which he in 1848 founded a school. His chief work was The Constitution of Man (1828).

George Combe was a major financial contributor to John Chapman’s Westminster Review and a colleague of Marmaduke Blake Sampson, and a friend of John Conolly, William Gregory, Robert Verity,

George Combe died at the water cure establishment of Edward Wickstead Lane in 1858,

George Combe and his brother Andrew Combe were friends of homeopath John Epps, and he met Lucretia Coffin Mott and Elizabeth Cady Stanton when he toured in America. Both brothers were eager and enthusiastic supporters of homeopathy.

After attending Edinburgh high school and the University of Edinburgh, Combe entered a lawyer’s office in 1804, and in 1812 began to practise on his own account. In 1815 the Edinburgh Review contained an article on the system of “craniology” of Franz Joseph Gall and Johann Gaspar Spurzheim, which was denounced as “a piece of thorough quackery from beginning to end.”

Combe laughed like others at the absurdities of this so called new theory of the brain, and thought that it must be finally exploded after such an exposure; and when Johann Gaspar Spurzheim delivered lectures in Edinburgh, in refutation of the statements of his critic, Combe considered the subject unworthy of serious attention.

He was, however, invited to a friend’s house where he saw Johann Gaspar Spurzheim dissect the brain, and he was so far impressed by the demonstration that he attended the second course of lectures.

Investigating the subject for himself, he became satisfied that the fundamental principles of phrenology were true - namely “that the brain is the organ of mind; that the brain is an aggregate of several parts, each subserving a distinct mental faculty; and that the size of the cerebral organ is, caeteris paribus, an index of power or energy of function.”

In 1817 his first essay on phrenology was published in the Scots Magazine; and a series of papers on the same subject appeared soon afterwards in the Literary and Statistical Magazine; these were collected and published in 1819 in book form as Essays on Phrenology, which in later editions became A System of Phrenology.

By his lectures and writings he attracted public attention to the subject on Continental Europe and the United States, as well as his native United Kingdom of Great Britain and Ireland; and a long discussion with William Hamilton in 1827-1828 excited general interest.

His most popular work, The Constitution of Man, was published in 1828, and in some quarters brought upon him denunciations as a materialist and atheist. From that time he saw everything by the light of phrenology.

He gave time, labour and money to help forward the education of the poorer classes; he established the first infant school in Edinburgh; and he originated a series of evening lectures on chemistry, physiology, history and moral philosophy. He studied the criminal classes, and tried to solve the problem how to reform as well as to punish them; and he strove to introduce into lunatic asylums a humane system of treatment.

In 1836 he offered himself as a candidate for the chair of logic at Edinburgh, but was rejected in favour of Sir William Hamilton. In 1838 he visited the United States and spent treatment of the criminal classes. On his return in 1840 he published his Moral Philosophy, and in the following year his Notes on the United States of North America.

In 1842 he delivered, in the German language, a course of twenty two lectures on phrenology in the Ruprecht Karl University of Heidelberg, and he travelled much in Europe, inquiring into the management of schools, prisons and asylums. The commercial crisis of 1855 elicited his remarkable pamphlet on The Currency Question (1858).

The culmination of the religious thought and experience of his life is contained in his work On the Relation between Science and Religion, first publicly issued in 1857. He was engaged in revising the ninth edition of the Constitution of Man when he died at Moor Park, Farnham.

He married in 1833 Cecilia Siddons, a daughter of the great actress Sarah Siddons.