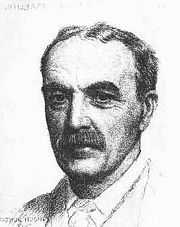 William Hale White 1831 - 1913 known by his pseudonym Mark Rutherford was a British writer and civil servant.

\**John Chapman was an ‘invaluable enabler’ who gave the start to the careers of many famous writers.

William Hale White was born in Bedford and educated at Bedford Modern School. His father, William White, a member of the Nonconformist community of the Bunyan Meeting, moved the family to London, where he was well known as a doorkeeper of the House of Commons.

William White wrote sketches of parliamentary life for the Illustrated Times, his son collected the writings and later released them as The Inner Life of the House of Commons in 1897.

William Hale White was educated for the Congregational ministry, but the development of his views prevented his taking up that career, and he became a clerk in the admiralty. He had already served an apprenticeship to journalism before he made his name as a novelist by the three books edited by Reuben Shapcott, The Autobiography of Mark Rutherford (1881), Mark Rutherford’s Deliverance (1885), and The Revolution in Tanner’s Lane (1887).

Though for a long time little appreciated by the public, his novels, particularly the earlier ones, share a power and style which must always give his works a place of their own in the literary history of their time. George Orwell described Mark Rutherford’s Deliverance as ‘one of the best novels written in English’.