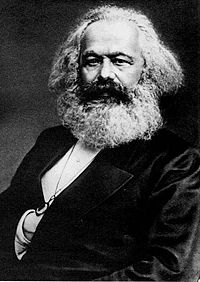 Karl Heinrich Marx was born in Trier, in the Kingdom of Prussia’s Province of the Lower Rhine, the third of seven children.

His father (was Heinrich Marx and his mother was Henriette Pressburg)…

Karl Marx was married to Jenny von Westphalen, the educated daughter of a Prussian baron, on June 19, 1843 in Kreuznacher Pauluskirche, Bad Kreuznach. Their engagement was kept secret at first, and for several years was opposed by both the Marx family and Westphalens.

During the first half of the 1850s the Marx family lived in poverty and constant fear of creditors in a three room flat on Dean Street in Soho, London. Marx and Jenny already had four children and three more were to follow. Of these only three survived to adulthood.

Marx’s major source of income at this time was Friedrich Engels, who was drawing a steadily increasing income from the family business in Manchester. This was supplemented by weekly articles written as a foreign correspondent for the New York Daily Tribune. Inheritances from one of Jenny’s uncles and her mother who died in 1856 allowed the family to move to somewhat more salubrious lodgings at 9 Grafton Terrace, Kentish Town a new suburb on the then outskirts of London.

Marx generally lived a hand to mouth existence, forever at the limits of his resources, although this did extend to some spending on relatively bourgeois luxuries, which he felt were necessities for his wife and children given their social status and the mores of the time.

Marx was educated at home until the age of thirteen. After graduating from the Trier Gymnasium, Marx enrolled in the University of Bonn in 1835 at the age of seventeen; he wished to study philosophy and literature, but his father insisted that it was more practical to study law. At Bonn he joined the Trier Tavern Club drinking society and at one point served as its president.

Suffering from poor grades, Marx’s father forced him to transfer to the far more serious and academically oriented Humboldt Universität in Berlin. During this period, Marx wrote many poems and essays concerning life, using the theological language acquired from his liberal, deistic father, such as “the Deity,” but also absorbed the atheistic philosophy of the Young Hegelians who were prominent in Berlin at the time.

Marx earned a doctorate in 1841 with a thesis titled The Difference Between the Democritean and Epicurean Philosophy of Nature, but he had to submit his dissertation to the University of Jena as he was warned that his reputation among the faculty as a Young Hegelian radical would lead to a poor reception in Berlin.

The Left, or Young Hegelians, consisted of a group of philosophers and journalists circling around Ludwig Feuerbach and Bruno Bauer opposing their teacher Hegel. Despite their criticism of Hegel’s metaphysical assumptions, they made use of Hegel’s dialectical method as a powerful weapon for the critique of established religion and politics. One of them, Max Stirner, turned critically against both Feuerbach and Bauer in his book “Der Einzige und sein Eigenthum” (1845, The Ego and Its Own), calling these atheists “pious people” for their reification of abstract concepts.

Marx, at that time a follower of Feuerbach, was deeply impressed by the work and abandoned Feuerbachian materialism and accomplished what recent authors have denoted as an “epistemological break.” He developed the basic concept of historical materialism against Stirner in his book, “Die Deutsche Ideologie” (1846, The German Ideology), which he did not publish.

Another link to the Young Hegelians was Moses Hess, with whom Marx eventually disagreed, yet to whom he owed many of his insights into the relationship between state, society and religion.

Towards the end of October 1843, Marx arrived in Paris, France. Paris at this time was the home and headquarters to armies of German, British, Polish, and Italian revolutionaries. Marx, for his part, had come to Paris to work with Arnold Ruge, another revolutionary from Germany, on the Deutsch-Französische Jahrbücher. There, on August 28, 1844, at the Café de la Régence on the Place du Palais he met Friedrich Engels, who was to become his most important friend and life-long collaborator.

Friedrich Engels had met Marx only once before and briefly at the office of the Rheinische Zeitung in 1842; he went to Paris to show Marx his recently published book, The Condition of the Working Class in England in 1844.[15] It was this book that convinced Marx that the working class would be the agent and instrument of the final revolution in history.

After the failure of the Deutsch-Französische Jahrbücher, Marx, living on the Rue Vaneau, wrote for the most radical of all German newspapers in Paris, indeed in Europe, the Vorwärts, established and run by the secret society called League of the Just. When not writing, Marx studied the history of the French Revolution and read Proudhon. He also spent considerable time studying a side of life he had never been acquainted with before—a large urban proletariat…

He re-evaluated his relationship with the Young Hegelians, and as a reply to Bauer’s atheism wrote On the Jewish Question. This essay was mostly a critique of current notions of civil and human rights and political emancipation, which also included several critical references to Judaism as well as Christianity from a standpoint of social emancipation. Friedrich Engels, a committed communist, kindled Marx’s interest in the situation of the working class and guided Marx’s interest in economics.

Marx became a communist and set down his views in a series of writings known as the Economic and Philosophical Manuscripts of 1844, which remained unpublished until the 1930s. In the Manuscripts, Marx outlined a humanist conception of communism, influenced by the philosophy of Ludwig Feuerbach and based on a contrast between the alienated nature of labor under capitalism and a communist society in which human beings freely developed their nature in cooperative production.

In January 1845, after Vorwärts expressed its hearty approval of the assassination attempt on Frederick William IV, King of Prussia, Marx, among many others, were ordered to leave Paris. He and Friedrich Engels moved on to Brussels, Belgium.

Marx devoted himself to an intensive study of history and in collaboration with Friedrich Engels elaborated on his idea of historical materialism, particularly in a manuscript (published posthumously as The German Ideology), the basic thesis of which was that “the nature of individuals depends on the material conditions determining their production.”

Marx traced the history of the various modes of production and predicted the collapse of the present one—industrial capitalism—and its replacement by communism. This was the first major work of what scholars consider to be his later phase, abandoning the Feuerbach-influenced humanism of his earlier work.

Next, Marx wrote The Poverty of Philosophy (1847), a response to Pierre-Joseph Proudhon’s The Philosophy of Poverty and a critique of French socialist thought. These works laid the foundation for Marx and Friedrich Engels’ most famous work, The Communist Manifesto, first published on February 21, 1848, as the manifesto of the Communist League, a small group of European communists who had come to be influenced by Marx and Friedrich Engels.

In the meantime a radical movement had seized power from King Louis Philippe in France, and invited Marx to return to Paris, where he witnessed the revolutionary June Days Uprising first hand.

When this collapsed in 1849, Marx moved back to Cologne and started the Neue Rheinische Zeitung (“New Rhenish Newspaper”). During its existence he was put on trial twice, on February 7, 1849 because of a press misdemeanor, and on the 8th charged with incitement to armed rebellion. Both times he was acquitted. The paper was soon suppressed and Marx returned to Paris, but was forced out again.

This time he sought refuge in London. Marx moved to London in May 1849, where he was to remain for the rest of his life. He briefly worked as correspondent for the New York Tribune in 1851.

In London Marx devoted himself to two activities: revolutionary organizing, and an attempt to understand political economy and capitalism. Having read Friedrich Engels’ study of the working class, Marx turned away from philosophy and devoted himself to the First International, to whose General Council he was elected at its inception in 1864. He was particularly active in preparing for the annual Congresses of the International and leading the struggle against the anarchist wing led by Mikhail Bakunin (1814–1876).

Although Marx won this contest, the transfer of the seat of the General Council from London to New York in 1872, which Marx supported, led to the decline of the International. The most important political event during the existence of the International was the Paris Commune of 1871 when the citizens of Paris rebelled against their government and held the city for two months. On the bloody suppression of this rebellion, Marx wrote one of his most famous pamphlets, The Civil War in France, an enthusiastic defense of the Commune.

Given the repeated failures and frustrations of worker’s revolutions and movements, Marx also sought to understand capitalism, and spent a great deal of time in The British Library studying and reflecting on the works of political economists and economic data. By 1857 he had accumulated over 800 pages of notes and short essays on capital, landed property, wage labour, the state, foreign trade and the world market; this work however was not published until 1941, under the title Grundrisse.

In 1859, Marx was able to publish Contribution to the Critique of Political Economy, his first serious economic work. In the early 1860s he worked on composing three large volumes, the Theories of Surplus Value, which discussed the theoreticians of political economy, particularly Adam Smith and David Ricardo. This work, that was published posthumously under the editorship of Karl Kautsky is often seen as the Fourth book of Capital, and constitutes one of the first comprehensive treatises on the history of economic thought.

In 1867, well behind schedule, the first volume of Capital was published, a work which analyzed the capitalist process of production. Here, Marx elaborated his labor theory of value and his conception of surplus value and exploitation which he argued would ultimately lead to a falling rate of profit and the collapse of industrial capitalism. Volumes II and III remained mere manuscripts upon which Marx continued to work for the rest of his life and were published posthumously by Friedrich Engels.

During the last decade of his life, Marx’s health declined and he was incapable of the sustained effort that had characterized his previous work. He did manage to comment substantially on contemporary politics, particularly in Germany and Russia. His Critique of the Gotha Programme, opposed the tendency of his followers Wilhelm Liebknecht (1826–1900) and August Bebel (1840–1913) to compromise with the state socialism of Ferdinand Lassalle in the interests of a united socialist party.

In his correspondence with Vera Zasulich, Marx contemplated the possibility of Russia’s bypassing the capitalist stage of development and building communism on the basis of the common ownership of land characteristic of the village Mir.

…Following the death of his wife Jenny in December 1881, Marx developed a catarrh that kept him in ill health for the last fifteen months of his life. It eventually brought on the bronchitis and pleurisy that killed him in London on March 14, 1883. He died a stateless person and was buried in Highgate Cemetery, London, on March 17, 1883.