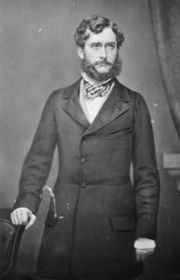 John Lorthop Motley was one of John Chapman’s proteges at the Westminster Review, and it was John Chapman who gave him the start he needed to become a famous historian.

John Chapman read and admired Motley’s _The Rise of the Dutch Republic_ and agreed to become his publisher, and to review the book in the Westminster Review. In April 1856, Foude’s leading article in the Westminster Review praised John Lothrop Motley’s work. As a result of this publication with John Chapman, Motley’s American publisher, who had refused the book originally, offered to publish his works, and the rest, as they say is history.

John Stuart Mill, who was a correspondent of John Lothrop Motley, also wrote for the Westminster Review.

John Lothrop Motley was the son of Thomas Motley, he was born at Dorchester (now a neighborhood of Boston, Massachusetts), attended the Round Hill School, Boston Latin School, and graduated from Harvard in 1831.

His boyhood was in Dedham, near the site of the present day Noble and Greenough School. He then studied at Göttingen, where he became a friend of Otto von Bismarck, and afterwards at Frederick William University, Berlin. After a period of European travel he returned in 1834 to America, where he continued his legal studies.

In 1837 he married Mary Benjamin (died 1874), a sister of Park Benjamin, and in 1839 he published anonymously a novel entitled Morton’s Hope, or the Memoirs of a Provincial.

In 1841 he entered the diplomatic service as secretary of legation in St. Petersburg, Russia, but resigned his post within three months.

Returning to America, he soon entered definitely upon a literary career. Besides contributing various historical and critical essays to the North American Review, including a remarkable essay on the Polity of the Puritans, he published in 1849, again anonymously, a second novel, entitled Merry Mount, a Romance of the Massachusetts Colony, based again on the odd history of Thomas Morton and Merrymount.

In about 1846 he had begun to plan a history of the Netherlands, in particular the period of the United Provinces, and he had already done a large amount of work on this subject when, finding the materials at his disposal in the United States inadequate, he went to Europe in 1851.

The next five years were spent at Dresden, Brussels and The Hague in investigation of the archives, which resulted in 1856 in the publication of The Rise of the Dutch Republic, which became very popular. It speedily passed through many editions, was translated into French, and also into Dutch, German and Russian. In 1860 Motley published the first two volumes of its continuation, The United Netherlands. This work was on a larger scale, and embodied the results of a still greater amount of original research. It was brought down to the truce of 1609 by two additional volumes, published in 1867.

The reception of Motley’s work in The Netherlands itself was favorable also, especially as Motley described the Dutch struggle for independence in a flattering light (some might say he was biased against their opponents). Historians like Guillaume Groen van Prinsterer (whom Motley extensively quotes in his work) viewed him very favorably. However, the eminent Dutch historian Robert Fruin (who was inspired by Motley to do some of his own best work), was critical of Motley’s tendency to make up “facts” if they made for a good story (though he admired Motley’s gifts as an author and stated that he continued to hold the work as a whole in high regard).

In 1861, just after outbreak of the American Civil War, Motley wrote two letters to The Times defending the Federal position, and these letters, afterwards reprinted as a pamphlet entitled Causes of the Civil War in America, made a favourable impression on President Lincoln.

Partly owing to this essay, Motley was appointed United States minister to Austria in 1861, a position which he filled with great success until his resignation in 1867.

Two years later he was sent to represent his country in London, but in November 1870 he was recalled by President Grant.

After a short visit to the Netherlands, he again went to live in England, where the Life and Death of John Barneveld appeared in two volumes in 1874.

Ill health now began to interfere with his literary work, and he died at Frampton Court, near Dorchester, Dorset, leaving three daughters. He was buried in Kensal Green Cemetery, London.

Motley’s merits as an historian are undeniably great. He told the story of a stirring period in the history of the world with full attention to the character of the actors and strict fidelity to the vivid details of the action, but his writing is best where most unvarnished, and probably no writer of his calibre has owed less to the mere sparkle of highly polished literary style.

An edition of his historical works was published in nine volumes in London.