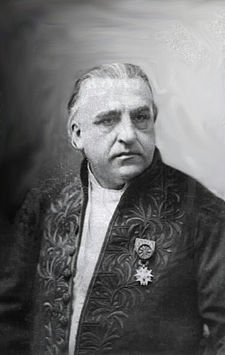 Jean Martin Charcot 1825 – 1893 was a French Neurologist and Professor of Anatomical Pathology. His work greatly influenced the developing fields of Neurology and Psychology.

He was called “the Napoleon of the neuroses.”

Charcot was an advocate of homeopathy and he also taught homeopath William Morris Butler.

Specifically, the new research focussed upon two issues: the relation of parascience to the practice of the French fin de siècle neurologist Jean Martin Charcot and his school, and the relation of Charcot’s school to developments in physiology after his death in 1893.

… the theatrical viewing of the patient developed by Charcot and his peers tended to licence parascience and so confused the distinction between new sciences such as neurology and physiology, with Spiritism, magnetism, Mesmerism, homeopathy…

Physicians such as France’s first Professor of Neurology, Jean Martin Charcot, confidently proclaimed in his lectures that he “looked forward to the day when all the lesions … would be definitively described, classified, catalogued”, others saw the realms of the mind and the brain as mysterious, at best.

Sigmund Freud, a student of Charcot, proposed a novel model of mental behaviour made up of the functional units of the Id, Ego and Superego, despite the lack of any anatomical support for his controversial theories. Sigmund Freud himself believed that such evidence would eventually be found, but in the absence of such findings, mental systems had to be deduced from such evidence as mental behaviour and dreams…

Hypnotism provided the greatest conundrum in this respect and this is why John Elliotson in London and Charcot in Paris scandalised many of their peers when, from 1838 and 1870 respectively, they seemed to give weight to such dubious ideas by publicly presenting their findings on the topic to titillated audiences…

In 1876, Charcot and several other prominent physicians investigated magnetist Victor Burq’s techniques involving the use of magnets, metal plates and magnetic sleep to induce psychophysical healing. Charcot and his peers rejected Victor Burq’s ideas about how this technique actually functioned—there was no “magnetic fluid” at work.

They nevertheless found that Victor Burq’s methods were remarkably effective at ameliorating and manipulating the conditions of many of their hysterical, epileptic and neurasthenic patients, and soon incorporated aspects of Victor Burq’s technique into their own practice…

When even giants of the medical profession such as Charcot presented hypnotised patients whose physical symptoms could be “psychically transferred” from one side of the body to another simply by moving a magnet from left to right, the idea that somnambules might be in tune with another, hidden physical realm did not seem so far fetched…

Born in Paris, Charcot worked and taught at the famous Salpêtrière Hospital for thirty three years. His reputation as an instructor drew students from all over Europe. In 1882, he established a neurology clinic at Salpêtrière, which was the first of its kind in Europe.

Charcot’s primary focus was neurology. He named and was the first to describe multiple sclerosis. He was also the first to describe a disorder known as Charcot joint or Charcot arthropathy, a degeneration of joint surfaces resulting from loss of proprioception. He researched the functions of different parts of the brain and the role of arteries in cerebral hemorrhage.

He was also one of the first to describe Charcot-Marie-Tooth disease (CMT). The announcement was made simultaneously with Pierre Marie of France (his resident) and Howard Henry Tooth of England. The disease is also sometimes called peroneal muscular atrophy.

In 1861 and 1862, Jean-Martin Charcot, with Alfred Vulpian, added more symptoms to James Parkinson’s clinical description and then subsequently attached the name Parkinson’s disease to the syndrome.

But Charcot’s most enduring work is that on hypnosis and hysteria. Charcot believed that hysteria was a neurological disorder caused by hereditary problems in the nervous system.

He used hypnosis to induce a state of hysteria in patients and studied the results, and was single-handedly responsible for changing the French medical community’s opinion about the validity of hypnosis (it was previously rejected as Mesmerism).