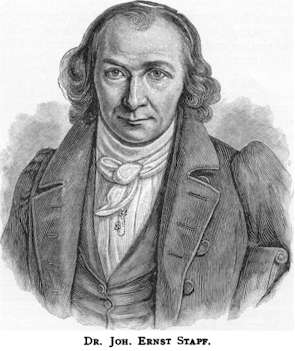 John Ernst Stapf was the homeopath of Queen Adelaide, and he taught William and Robert Wesselhoeft.

John Ernst Stapf attended the Queen Dowager Adelaide in Nuremberg and saved her life after her allopathic physicians had given up on her. This incredible cure ‘opened up the mansions of the aristocracy’ across Europe to homeopathy (_Southwestern Homeopathic Journal and Review, Volumes 2-3.** *1848. Page 118 onwards. See Also *Letter to the Hon.——- with reasons for examining and believing the fundamental principles of homoeopathy.** _Caleb B. Ticknor. Henry Ludwig, 1840. Page 14 onwards).

The first of Samuel Hahnemann’s pupils, together with Gustav Wilhelm Gross he represented pure Homeopathy, being the founders, in 1822, with Moritz Wilhelm Muller of the famous Archiv fur die homoopathische Heilkunst _(_Archive for the Homeopathic Healing Art), 1st magazine on Homeopathy; until the end he always remained his true pupil and upholder of the pure theory.

Johan Ernst Stapf was born September 9, 1788, at Naumburg. His father, Johann Gothofredus Stapf, was first pastor to the church of Mary Magdalen.

Stapf was the first to embrace the principles of Samuel Hahnemann.

Pierre Augustus Rapou says:“Stapf is the most ancient disciple of Samuel Hahnemann and more celebrated than the others. He began his homeopathic study in 1811, and in 1812 practiced only with the remedies mentioned in the first volume of the Materia Medica Pura.

“He was at the time the only partisan of our method, and he developed it well.”

It is reported that eventually he only used olfaction of the higher potencies to administer the remedies. He commenced his studies of the high potencies in 1843 and published the results in June 1844.

Frantz Hartmann, in speaking of the original Provers’ Union in the year 1814, says:

“Stapf was no longer living in Leipsic, but only came occasionally from Naumburg, where he was settled. The benevolence beaming from his eyes readily won for him the hearts of all.

“A more intimate acquaintance with him soon showed that in every respect he was far in advance of us in knowledge, although he had not long been honored with the title of doctor, and the regard was awarded to him unasked for, which was due to his extensive scientific achievements and his natural talents as a physician.

“His conversation was instructive in more respects than one, and he seemed hardly conscious of his superiority over others, while he was all the more esteemed on account of this very modesty.”

Johann Stapf started the first Homeopathic journal. In 1822 he became the editor of the Archiv fur die homoopathische Heilkunst (Archive for the Homeopathic Healing Art). It was published at Leipsig, three times a year. He continued as its editor until 1839. It was the journal of the German Homeopathic Provers’ Union.

He also published several pamphlets upon the subject of Homeopathy. In 1829 he collected and edited the writings of Samuel Hahnemann which he issued under the title: Kleine medicinische Schriften, von Samuel Hahnemann. Dresden. Arnold. 1829.

This book was presented to Samuel Hahnemann on the occasion of his fiftieth Doctor Jubilee, August 10, 1829.

He also published a book known as Stapf’s additions to the Materia Medica Pura. It is a collection of the provings originally published in the first fifteen volumes of the Archiv fur die homoopathische Heilkunst.

Stapf wrote for the Archiv fur die homoopathische Heilkunst under the nom de plume of ‘Philalethes’. Samuel Hahnemann wrote letters to him, asking him about the articles and also praising them. In the sixth volume of the Archiv fur die homoopathische Heilkunst are several essays, and in one of them he describes his conversion to Homeopathy, which was by reading The Organon soon after its publication.

Similar to Samuel Hahnemann, Stapf was persecuted for the homeopathic practice of medicine.

”Samuel Hahnemann’s oldest admirer and disciple, Stapf, of Naumburg, met with a similar fate. He, too, was scorned and ridiculed in every possible way, living for many years under a ban among his professional brethren.

“Though he had his days of persecution, Stapf was eventually regarded by his colleagues as a physician with a European reputation and was given their friendship.”

Stapf was a pure Homeopath. He was a prover of 32 medicines and enthusiastic about his use of Lachesis. In 1830, Constantine Hering introduced this remedy to Europe through Stapf, who prepared it for the German Homeopaths. Stapf, like Samuel Hahnemann, considered the habits of the patient regarding coffee, wine, and tobacco.

Being Samuel Hahnemann’s first pupil Stapf was much loved by him. Samuel Hahnemann continued to correspond with him until the day of his death, and always showed the greatest confidence in him and his medical methods.

While with the most of his pupils he was at times cold and distant, nowhere in his writings is there shown the least difference of opinion between Samuel Hahnemann and Stapf. It was to Stapf, in connection with Gustav Wilhelm Gross, that Samuel Hahnemann first divulged the secret of the chronic diseases, or psora theory, calling them to Koethen for this purpose in 1829.

“Endowed with brilliant talents, a wealth of knowledge, and personal amiability, he was the active and vivifying element in the Provers’ Union, for which his peculiar and somewhat mercurial vivacity and his sparkling wit eminently qualified him.

“A firm friendship, which nothing could disturb, bound him to his Master to the end.

“By his participation in the provings of medicines and the great number of accurate and reliable symptoms he contributed, as well as by his Archiv fur die homoopathische Heilkunst and the number of scientific articles he furnished towards the foundation and establishment of the new doctrine, he has raised a lasting monument to his memory.”

“On the 11th of July, 1860, there died at Kosen the first and greatest scholar of Samuel Hahnemann, the Sachsisch Meining’sche Medizinalrath Johann Ernst Stapf, in his seventy first year. Peace to his ashes, and rest, now his long pilgrimage is over.”

“I still continue to read works on other scientific subjects, but nothing medical except your Archiv fur die homoopathische Heilkunst. I have not read even Christoph Wilhelm von Hufeland’s Journal for years, and, in my present isolation and severance from well informed physicians, I do not know where to get the loan of the number of Christoph Wilhelm von Hufeland’s Journal you refer me to.

“I am delighted to receive the important information that the leader of all writers of complicated prescriptions, and of the most material pathology of the ordinary stamp, has again bestowed a friendly glance on his antipode, who has in his writings indicated him as the champion of antiquated medical nonsense, and mentioned him alone by name (in the Sources of the ordinary Materia Medica at the beginning of the third volume of the Materia Medica Pura).

“You would confer a favor on me if, when opportunity offers, would make a short extract from his favorable judgment. I am pleased with Gustav Wilhelm Gross’s refutation of the Anti-Organon. Gustav Wilhelm Gross, in my opinion, is growing more valiant. My only regret is that he has spent so much time and thought over that piece of sophistry.

“Believe me, all this senseless fighting against the manifest truth only exhausts the poor creatures, and does not stay its progress, and we would do well to allow such trashy, spiteful lucubrations to pass unnoticed ; they will without aid sink into the abyss of oblivion and into their merited nothingness.

“I fear more the empirical contaminations of that society of half Homoeopaths about which you write, which they had sufficient prudence not to invite me to join, but of whose doings I have been pretty correctly informed by oral communications. I fear that inaccuracy and rashness will preside over their deliberations, and I would earnestly beg of you to do what you can to check and restrain them.

“For should our art once lose its attribute of the most conscientious exactness, which must happen if the dii minorurn gentium seek to push themselves into notoriety by their so called observations, then I tremble for the raising of our art out of the dust; then we shall lose all certainty, which is of great importance to us.

“Therefore, I beg you will keep out of your Archiv fur die homoopathische Heilkunst all superficial observations of pretended successful treatment. Admit only truthful, accurate, careful records of cases from the practice of accredited Homeopaths; these must be models of good Homeopathic art.

“In spite of all precautions, some of these recorded cases of chronic maladies will incur suspicion that they may not be permanent, when the eyes of medical men shall be opened on the subject of the cure of chronic diseases by my book, which, after ten years labor, is not yet ready, but is gradually approaching completion”.

Isopathy provoked endless arguments in the homeopathic circles: other nineteenth century relevant physicians who employed isopathy were Johann Stapf, Johann Gottfried Rademacher (founder of ‘organotherapy’), Charles Edouard Brown Seqard, Arnold, Johann Emanuel Veith, while Philip Wilhelm Ludwig Griesselich, Edward William Berridge and others disapproved this method because the isopathic substances were rarely subjected to proving and were not prescribed on the basis of symptom similarity as in the original Samuel Hahnemann’s method.

This radical new isopathic and transcendental homeopathic conception, or ‘agent of change’, which originated about the time of the publication of Samuel Hahnemann’s Chronic Diseases in 1828, [134] soon spawned a new movement within homeopathy, a dangerous and frightening sub-sect [to people like Robert Ellis Dudgeon], gathering to its cause a motley but energetic crew of rebels, dissenters and freethinkers.

Harris Livermore Coulter page 59: Through homeopathy, Isopathy opened up an ‘unimaginably vast field to therapeutic research’, and through Isopathy, homeopathy exploded as John Ernst Stapf wrote in 1834 ‘The discovery of the effectiveness of contagious substances against the diseases which produce them is one of the most important discoveries to be noted since the birth of our method’.