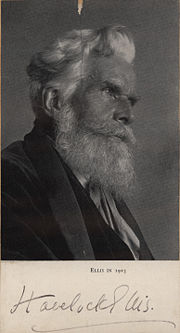 Havelock Ellis took homeopathic remedies and understood homeopathy sufficiently to use it as an analogy in his book Studies in the Psychology of Sex.

Havelock Ellis was a correspondent of Elliot Lovegood Grant Watson.

From http://en.wikipedia.org/wiki/Havelock_Ellis Ellis, son of Edward Peppen Ellis and Susannah Mary Wheatley, was born at Croydon, then a small town south of London. His father was a sea captain, his mother the daughter of a sea captain, and many other relatives lived on or near the sea.

At seven years of age, his father took him on one of his voyages, during which he called at Sydney, Callao and Antwerp. After his return, Ellis went to a fairly good school, the French and German College near Wimbledon, and afterward attended a school in Mitcham.

In April 1875 he left London on his father’s ship for Australia, and soon after his arrival in Sydney obtained a position as a master at a private school. It was discovered that he had had no training for this position and so he became a tutor for a family living a few miles from Carcoar. He spent a year there, doing a lot of reading, and then obtained a position as a master at a grammar school in Grafton. The headmaster had died and Ellis carried on the school for that year, but was too young and inexperienced to do so successfully.

At the end of the year, he returned to Sydney and, after three months’ training, was given charge of two government part-time elementary schools, one at Sparkes Creek and the other at Junction Creek.

He lived at the school house on Sparkes Creek for a year - the most eventful year of his life as he was afterwards to call it: “In Australia I gained health of body; I attained peace of soul; my life task was revealed to me; I was able to decide on a professional vocation; I became an artist in literature … these five points covered the whole activity of my life in the world. Some of them I should doubtless have reached without the aid of the Australian environment, scarcely all, and most of them I could never have achieved so completely if chance had not cast me into the solitude of the Liverpool Range.”

Ellis returned to England in April 1879. He had decided to take up the study of sex and felt his first step must be to qualify as a medical man. He studied medicine at St Thomas’s Hospital, but never had a regular medical practice.

Havelock Ellis, another founder of the Fabian Society joined The Fellowship of the New Life in 1883, meeting other social reformers Edward Carpenter and George Bernard Shaw.

Ellis was also a Vice President of the National Council for Civil Liberties founded by by Ronald Hubert Kidd, the grandson of homeopath Joseph Kidd..

In November 1891, at the age of 32, and still a virgin, Ellis married the English writer and proponent of women’s rights, Edith Lees (none of his four sisters ever married). From the beginning, their marriage was unconventional (Edith Ellis was openly lesbian), and at the end of the honeymoon, Ellis went back to his bachelor rooms in Paddington, while she lived at Fellowship House. Their “open marriage” was the central subject in Ellis’s autobiography, My Life.

According to Ellis in My Life, his friends were much amused at his being considered an expert on sex considering the fact that he suffered from impotence until the age of 60, when he discovered that he was able to become aroused by the sight of a woman urinating. Ellis named the interest in urination “Undinism” but it is now more commonly called Urolagnia.

His Sexual Inversion, the first English medical text book on homosexuality, co-authored with John Addington Symonds, described the sexual relations of homosexual men and boys, something that Ellis did not consider to be a disease, immoral, or a crime.

The work assumes that same-sex love transcends age as well as gender taboos, as seven of the twenty one examples are of inter generational relationships. A bookseller was prosecuted in 1897 for stocking it.

Although the term itself is attributed to Ellis, he writes in 1897, “‘Homosexual’ is a barbarously hybrid word, and I claim no responsibility for it.”

Other psychologically important concepts developed by Ellis include autoerotism and narcissism, both of which were later taken up by Sigmund Freud.

Ellis was a supporter of eugenics. He served as vice-president to the Eugenics Education Society and wrote on the subject in The Task of Social Hygiene.