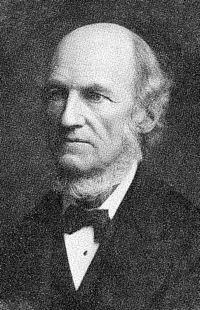 William Benjamin Carpenter CB FRS 1813 – 1885 was an English physiologist and naturalist, Examiner in Physiology at the University of London and Lecturer on Physiology at the London Hospital (Temperance and teetotalism: an inquiry into the effects of alcoholic drinks on the human system in health and disease. William Benjamin Carpenter. Scottish Temperance League, 1849. Frontspiece page 1).

William Carpenter wrote for the _Westminster Review_ and was a friend of John Chapman. He was also a friend of  James John Garth Wilkinson (Clement John Wilkinson, James John Garth Wilkinson; A Memoir of His Life, with a Selection of His Letters. (Kegan Paul, Trench, Trubner & Co, 1911). Page 21), and a supporter of the hypnotist James Braid 1795 - 1860 (_The Discovery of Hypnosis - The Complete Writings of James Braid, the Father of Hypnotherapy.__ _James Braid, Donald Robertson (ed.)UKCHH Ltd, 2009. Page 148).

The _Westminster Review_ was founded in 1823 by Jeremy Bentham and James Mill as a quarterly journal for philosophical radicals, and was published from 1824 to 1914.

In 1851 the journal was acquired by John Chapman based at 142 the Strand, London, a publisher who originally had medical training.

The then unknown Mary Ann Evans, later better known by her pen name of George Eliot, had brought together his authors, including Francis William Newman, William Rathbone Greg, Harriet Martineau and the young journalist Herbert Spencer who had been working and living cheaply in the offices of The Economist opposite John Chapman’s house.

These authors met during that summer to give their support to this flagship of freethought and reform, joined by others including John Stuart Mill, William Carpenter, Robert Chambers and George Jacob Holyoake. They were later joined by Thomas Henry Huxley, an ambitious young ship’s surgeon determined to become a naturalist.

Mary Ann Evans, who wrote under the name George Eliot, became assistant editor and produced a four page prospectus setting out their common beliefs in progress, ameliorating ills and rewards for talent, setting out a loosely defined evolutionism as “the fundamental principle” of what she and John Chapman called the “Law of Progress”.

The group was divided over the work of Thomas Malthus, with George Jacob Holyoake opposing it as the principle of the workhouse which blamed the poor for their poverty, while to William Rathbone Greg and Harriet Martineau this was a law of nature encouraging responsibility and self improvement. John Chapman asked Herbert Spencer to write about this divisive matter for the first issue, and Herbert Spencer’s Theory of Population deduced from the General Law of Animal Fertility actually appeared in the second issue, supporting the painful Malthusian principle as both true and self-correcting.

After 1853 John Tyndall joined Thomas Henry Huxley in running the science section of the _Westminster Review_ and formed a group of evolutionists who helped pave the way for Charles Darwin’s 1859 publication of The Origin of Species and gave it backing in the ensuing furore. The term “Darwinism” was first put in print by Thomas Henry Huxley in his favourable review of The Origin of Species, in the April 1860 issue of the _Westminster Review_.

The Nuttall Encyclopedia, published in 1907, notes that the Breeches Review was then a nickname for the journal on account of the fact that Francis Place, a breeches-maker, was a major shareholder in the enterprise.

William Carpenter was born at Exeter, the eldest son of Lant Carpenter. His father was an important Unitarian preacher who influenced a “rising generation of Unitarian intellectuals, including James Martineau and the _Westminster Review__’_s John Bowring.”

From his father, Carpenter inherited a belief in the essential lawfulness of the creation: this meant that natural causes were the explanation of the world as we find it. William embraced this “naturalistic cosmogeny” as his starting point.

Carpenter was apprenticed to the eye surgeon John Bishop Estlin, who was also the son of a Unitarian minister, and accompanied him to the West Indies in 1833. He attended medical classes at University College London (1834-35), and then went to the University of Edinburgh (1835-39), where he received his MD in 1839.

On his resignation in 1879, Carpenter was appointed CB in recognition of his services to education. He died in London, from injuries occasioned by the accidental upsetting of a spirit-lamp.

His graduation thesis on the nervous system of invertebrates won a prize, and led to his first books.This work in comparative neurology was recognized in 1844 by his election as a Fellow of the Royal Society. His appointment as Fullerian Professor of Physiology at the Royal Institution in 1845 enabled him to exhibit his powers as a teacher and lecturer. His gift of ready speech and luminous interpretation placing him in the front rank of exponents, at a time when the popularization of science was in its infancy.

He worked hard as investigator, author, editor, demonstrator and lecturer throughout his life; but it was his researches in marine zoology, notably in the “lower” organisms, as Foraminifera and Crinoids, that were most valuable. These researches gave an impetus to deep-sea exploration, an outcome of which was in 1868 the oceanographic survey with HMS Lightning and later the more famous Challenger Expedition.

He took a keen and laborious interest in the evidence adduced by Canadian geologists as to the organic nature of the so-called Eozoon canadense, discovered in the Laurentian strata, and at the time of his death had nearly finished a monograph on the subject, defending the now discredited theory of its animal origin. He was an adept in the use of the microscope, and his popular treatise on it stimulated many to explore this new aid. He was awarded the Royal Medal in 1861.

In 1856 Carpenter became Registrar of the University of London, and held the office for twenty-three years. Carpenter gave qualified support to Charles Darwin but he had reservations as to the application of evolution to man’s intellectual and spiritual nature.

Carpenter is considered as one of the founders of the modern theory of the adaptive unconscious. Together with William Hamilton and Thomas Laycock they provided the foundations on which adaptive unconscious is based today. They observed that the human perceptual system almost completely operates outside of conscious awareness.

These same observations have been made by Hermann Helmholtz. Because these views were in conflict with the theories of Descartes, they were largely neglected, until the cognitive revolution of the 1950s.

In 1874 Carpenter noticed that the more he studied the mechanism of thought, the more clear it became that it operates largely outside awareness. He noticed that the unconscious prejudices can be stronger than conscious thought and that they are more dangerous since they happen outside of conscious.

He also noticed that emotional reactions can occur outside of conscious until attention is drawn to them: